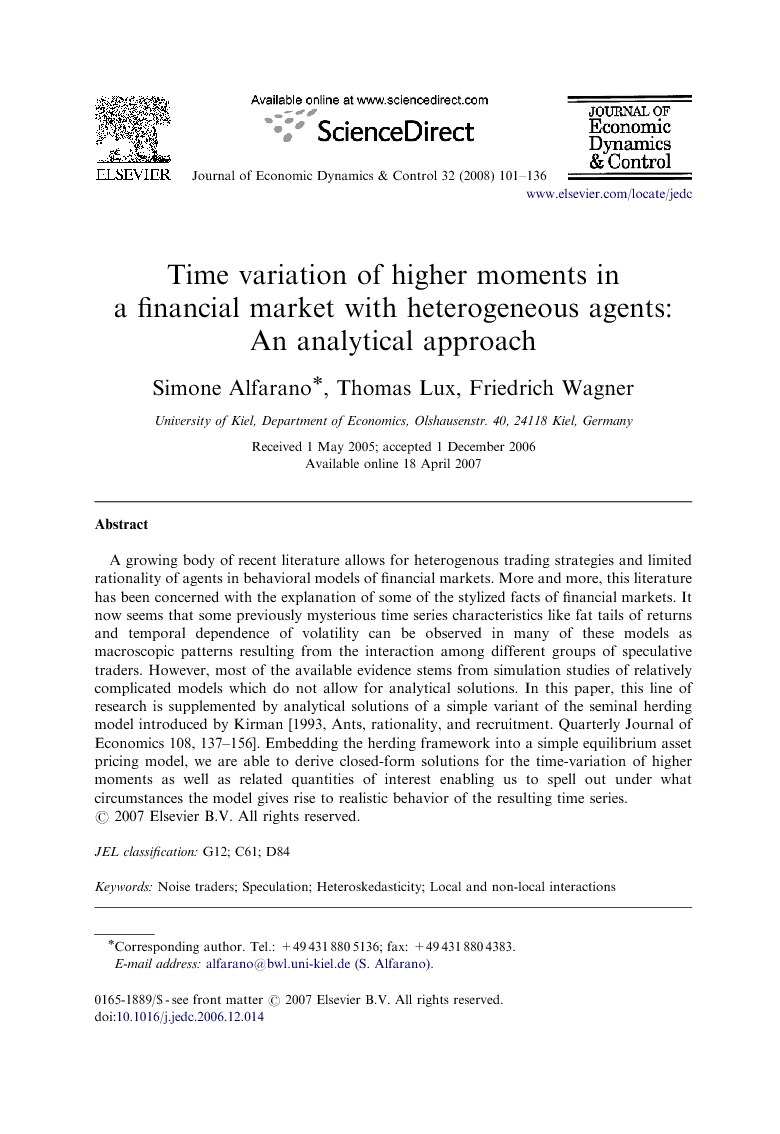 A growing body of recent literature allows for heterogenous trading strategies and limited rationality of agents in behavioral models of financial markets. More and more, this literature has been concerned with the explanation of some of the stylized facts of financial markets. It now seems that some previously mysterious time series characteristics like fat tails of returns and temporal dependence of volatility can be observed in many of these models as macroscopic patterns resulting from the interaction among different groups of speculative traders. However, most of the available evidence stems from simulation studies of relatively complicated models which do not allow for analytical solutions. In this paper, this line of research is supplemented by analytical solutions of a simple variant of the seminal herding model introduced by Kirman [1993, Ants, rationality, and recruitment. Quarterly Journal of Economics 108, 137–156]. Embedding the herding framework into a simple equilibrium asset pricing model, we are able to derive closed-form solutions for the time-variation of higher moments as well as related quantities of interest enabling us to spell out under what circumstances the model gives rise to realistic behavior of the resulting time series.

The aim of the present paper was to contribute to a better understanding of the statistical properties of agent-based models of financial markets. To this end, we attempted a thorough analysis of different types of herding models in the tradition of Kirman's seminal ant model. Our novel insights are the following: (i) We were able to derive closed-form solutions for various moments as well as the autocorrelations of raw and squared returns. Our results demonstrate that both leptokurtosis of returns and temporal dependence of volatility are generic features of this model and are intimately linked to the herding component. This underscores the importance of boundedly rational behavior as a potential explanation of the stylized facts. Admittedly, our model did not produce power laws (hyperbolic decay) of the cumulative distribution nor of the autocorrelation function. However, in a companion paper (Alfarano and Lux, 2007), we also show that pseudo-empirical analysis of time series for such a model could easily produce ‘spurious’ or ‘apparent’ power laws, which is a typical outcome within a pre-asymptotic regime with a length of the time series below some threshold value. (ii) We have also investigated the dependency of the ‘interesting’ dynamics and stylized facts on system size, revisiting earlier findings of trivial large N limits in similar models. As it turns out, trivial or non-trivial behavior of large markets depend on the exact formalization of transition rates. Ironically, a literal interpretation of pairwise interactions leads to some sort of ‘global’ coupling of agents, which preserves all interesting features of the model for any system size. On the contrary, a more conventional formalization of the transitions rates in terms of concentrations leads to a convergence to uninteresting (and unrealistic) Gaussian dynamics in the limit of large markets.