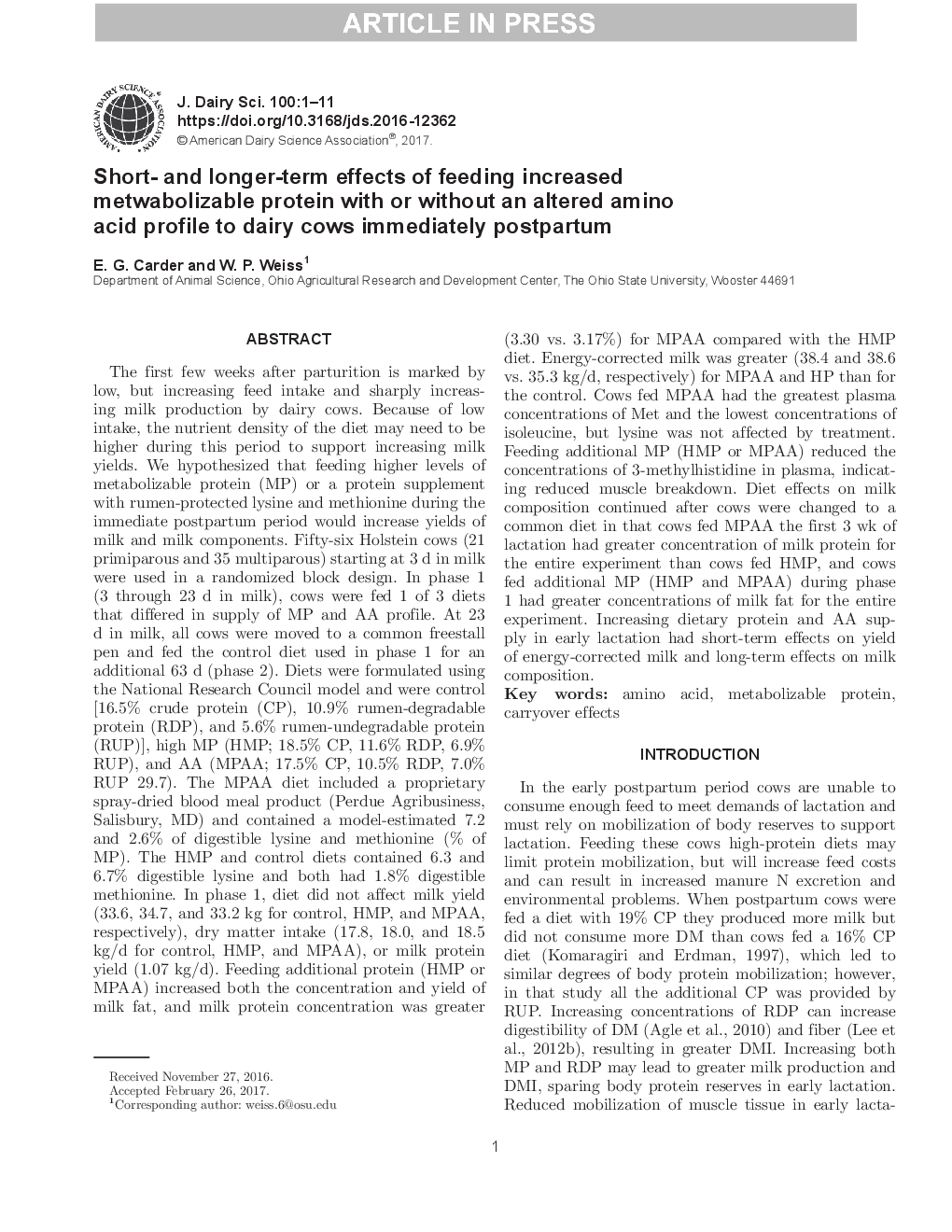 The first few weeks after parturition is marked by low, but increasing feed intake and sharply increasing milk production by dairy cows. Because of low intake, the nutrient density of the diet may need to be higher during this period to support increasing milk yields. We hypothesized that feeding higher levels of metabolizable protein (MP) or a protein supplement with rumen-protected lysine and methionine during the immediate postpartum period would increase yields of milk and milk components. Fifty-six Holstein cows (21 primiparous and 35 multiparous) starting at 3 d in milk were used in a randomized block design. In phase 1 (3 through 23 d in milk), cows were fed 1 of 3 diets that differed in supply of MP and AA profile. At 23 d in milk, all cows were moved to a common freestall pen and fed the control diet used in phase 1 for an additional 63 d (phase 2). Diets were formulated using the National Research Council model and were control [16.5% crude protein (CP), 10.9% rumen-degradable protein (RDP), and 5.6% rumen-undegradable protein (RUP)], high MP (HMP; 18.5% CP, 11.6% RDP, 6.9% RUP), and AA (MPAA; 17.5% CP, 10.5% RDP, 7.0% RUP 29.7). The MPAA diet included a proprietary spray-dried blood meal product (Perdue Agribusiness, Salisbury, MD) and contained a model-estimated 7.2 and 2.6% of digestible lysine and methionine (% of MP). The HMP and control diets contained 6.3 and 6.7% digestible lysine and both had 1.8% digestible methionine. In phase 1, diet did not affect milk yield (33.6, 34.7, and 33.2 kg for control, HMP, and MPAA, respectively), dry matter intake (17.8, 18.0, and 18.5 kg/d for control, HMP, and MPAA), or milk protein yield (1.07 kg/d). Feeding additional protein (HMP or MPAA) increased both the concentration and yield of milk fat, and milk protein concentration was greater (3.30 vs. 3.17%) for MPAA compared with the HMP diet. Energy-corrected milk was greater (38.4 and 38.6 vs. 35.3 kg/d, respectively) for MPAA and HP than for the control. Cows fed MPAA had the greatest plasma concentrations of Met and the lowest concentrations of isoleucine, but lysine was not affected by treatment. Feeding additional MP (HMP or MPAA) reduced the concentrations of 3-methylhistidine in plasma, indicating reduced muscle breakdown. Diet effects on milk composition continued after cows were changed to a common diet in that cows fed MPAA the first 3 wk of lactation had greater concentration of milk protein for the entire experiment than cows fed HMP, and cows fed additional MP (HMP and MPAA) during phase 1 had greater concentrations of milk fat for the entire experiment. Increasing dietary protein and AA supply in early lactation had short-term effects on yield of energy-corrected milk and long-term effects on milk composition.