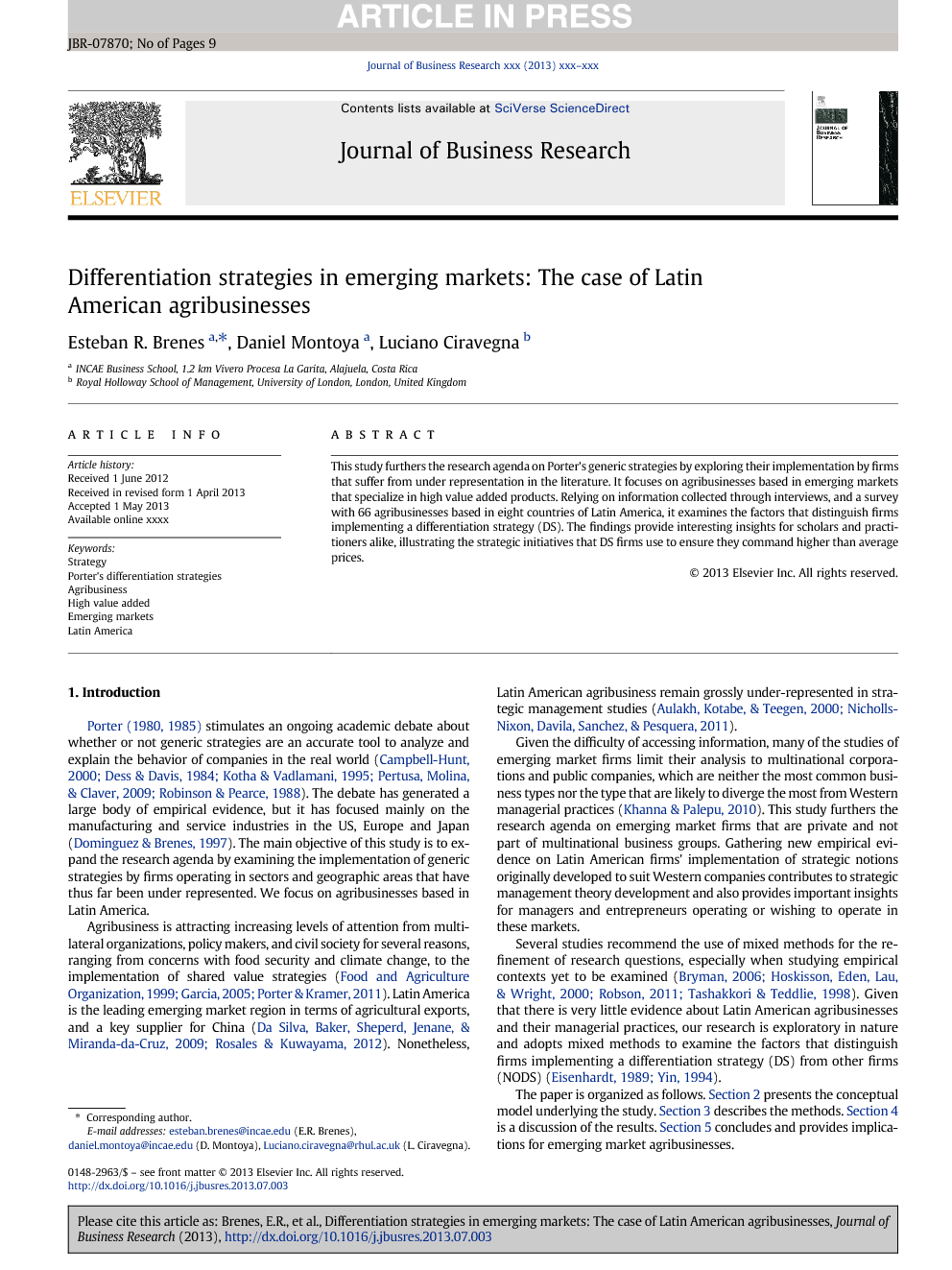 This study furthers the research agenda on Porter's generic strategies by exploring their implementation by firms that suffer from under representation in the literature. It focuses on agribusinesses based in emerging markets that specialize in high value added products. Relying on information collected through interviews, and a survey with 66 agribusinesses based in eight countries of Latin America, it examines the factors that distinguish firms implementing a differentiation strategy (DS). The findings provide interesting insights for scholars and practitioners alike, illustrating the strategic initiatives that DS firms use to ensure they command higher than average prices.

Porter, 1980 and Porter, 1985 stimulates an ongoing academic debate about whether or not generic strategies are an accurate tool to analyze and explain the behavior of companies in the real world (Campbell-Hunt, 2000, Dess and Davis, 1984, Kotha and Vadlamani, 1995, Pertusa et al., 2009 and Robinson and Pearce, 1988). The debate has generated a large body of empirical evidence, but it has focused mainly on the manufacturing and service industries in the US, Europe and Japan (Dominguez & Brenes, 1997). The main objective of this study is to expand the research agenda by examining the implementation of generic strategies by firms operating in sectors and geographic areas that have thus far been under represented. We focus on agribusinesses based in Latin America. Agribusiness is attracting increasing levels of attention from multilateral organizations, policy makers, and civil society for several reasons, ranging from concerns with food security and climate change, to the implementation of shared value strategies (Food and Agriculture Organization, 1999, Garcia, 2005 and Porter and Kramer, 2011). Latin America is the leading emerging market region in terms of agricultural exports, and a key supplier for China (Da Silva et al., 2009 and Rosales and Kuwayama, 2012). Nonetheless, Latin American agribusiness remain grossly under-represented in strategic management studies (Aulakh et al., 2000 and Nicholls-Nixon et al., 2011). Given the difficulty of accessing information, many of the studies of emerging market firms limit their analysis to multinational corporations and public companies, which are neither the most common business types nor the type that are likely to diverge the most from Western managerial practices (Khanna & Palepu, 2010). This study furthers the research agenda on emerging market firms that are private and not part of multinational business groups. Gathering new empirical evidence on Latin American firms' implementation of strategic notions originally developed to suit Western companies contributes to strategic management theory development and also provides important insights for managers and entrepreneurs operating or wishing to operate in these markets. Several studies recommend the use of mixed methods for the refinement of research questions, especially when studying empirical contexts yet to be examined (Bryman, 2006, Hoskisson et al., 2000, Robson, 2011 and Tashakkori and Teddlie, 1998). Given that there is very little evidence about Latin American agribusinesses and their managerial practices, our research is exploratory in nature and adopts mixed methods to examine the factors that distinguish firms implementing a differentiation strategy (DS) from other firms (NODS) (Eisenhardt, 1989 and Yin, 1994). The paper is organized as follows. Section 2 presents the conceptual model underlying the study. Section 3 describes the methods. Section 4 is a discussion of the results. Section 5 concludes and provides implications for emerging market agribusinesses.

This article presents a conceptual framework to study the implementation of generic strategies by emerging market agribusinesses. The study develops the model relying on empirical evidence that we collected directly through repeated face to face interviews with the entrepreneurs of 17 Latin American agribusinesses. We then tested it with 66 firms based in eight countries of the humid tropics of Latin America and discussed the results by integrating them with the qualitative information we collected through interviews. The study finds that innovation capabilities, marketing skills, and agribusiness scope are the three key dimensions setting apart an agribusiness firm that competes using a DS from those implementing cost leadership strategies or that are stuck in the middle (NODS). Both innovation capabilities and marketing skills have a direct effect on the way a firm is perceived by its clients, and thus also on the clarity of its positioning in the market. By developing new products a firm can generate new value for customers and thus differentiate itself from competitors. By marketing a firm can ensure its innovation efforts are perceived in terms of higher value by customers, whether as new products or superior quality. Agribusiness scope can also be perceived by customers if a firm diversifies its range of products, strengthening its brand and position in a given market — for example offering not only milk, but also cheese and yoghurt. The NODS firm in our sample operated in more markets than DS firms. The qualitative information we collected suggests that Latin American agribusinesses that adopt a DS strategy are relatively conservative in their internationalization — before entering new markets they diversify their products, improve their processes and strengthen their brands domestically. They do so in order to command higher prices and maintain this strategic position vis a vis competitors. Given that they do not compete on low cost products, DS firms enter new markets only if and when they can command higher prices by differentiating themselves from other producers. On the other hand, NODS firms do not attempt at creating additional value by differentiating themselves from competitors. To grow, they try entering new markets using the same products and processes but offering lower prices than their competitors. Our fieldwork suggests that it is easier for producers to enter new markets through a NODS strategy. The exploratory results here illustrate that Latin American agribusinesses that adopt differentiation strategies do indeed behave differently from others, investing more resources in specific activities that are functional to their strategy, such as generating a broad range of products. Although operating in contexts that are highly different from those of developed economies, Latin American agribusinesses implement generic strategies in ways that are broadly consistent with Porter, 1980 and Porter, 1996. Interestingly, strategy formulation and formalization appeared to be the most common in the firms adopting a differentiation strategy, suggesting that other firms may be cost leaders by default, as that is the most common trend found in the agrosector (Hillman and Hitt, 1999 and Ketelhöhn et al., 2012). This study is innovative in its exploration of strategy implementations by businesses that suffer from being under-represented in the literature: entrepreneurial agribusiness based in Latin America (Lopez, Kundu, & Ciravegna, 2008). Thus, the study contributes to the literature on strategy, management, and entrepreneurship (Acquaah and Yasai-Ardekani, 2008, Aulakh et al., 2000 and Porter and Kramer, 2011). Given that Latin America is a leading global producer and exporter of agricultural products, studying the strategies of Latin American agribusinesses holds important implications for other companies based in the region, such as multinational agribusiness and related businesses (Sotomayor, Rodríguez, & Rodríguez, 2011). This study can help managers of agribusiness firms in tropical areas of the world assess their strategies and focus their resources on issues that could help find a clearer direction and better strategic positioning to develop a sustainable competitive advantage. The main limitation of this study is that it is exploratory. The study objectives are indeed to further the management research agenda by developing a conceptual model for the study of strategy implementation by agribusinesses based in Latin America and other emerging markets. Additional research is necessary to develop research hypotheses based on the conceptual model and test them rigorously in a broad range of empirical settings to obtain statistically significant correlations. Future studies could use our conceptual framework (as Fig. 1 and Fig. 4 illustrate) as a starting point to analyze agribusiness firms from other regions, for example comparing strategy implementation by low and high value added agribusinesses based in emerging markets and in developed economies.