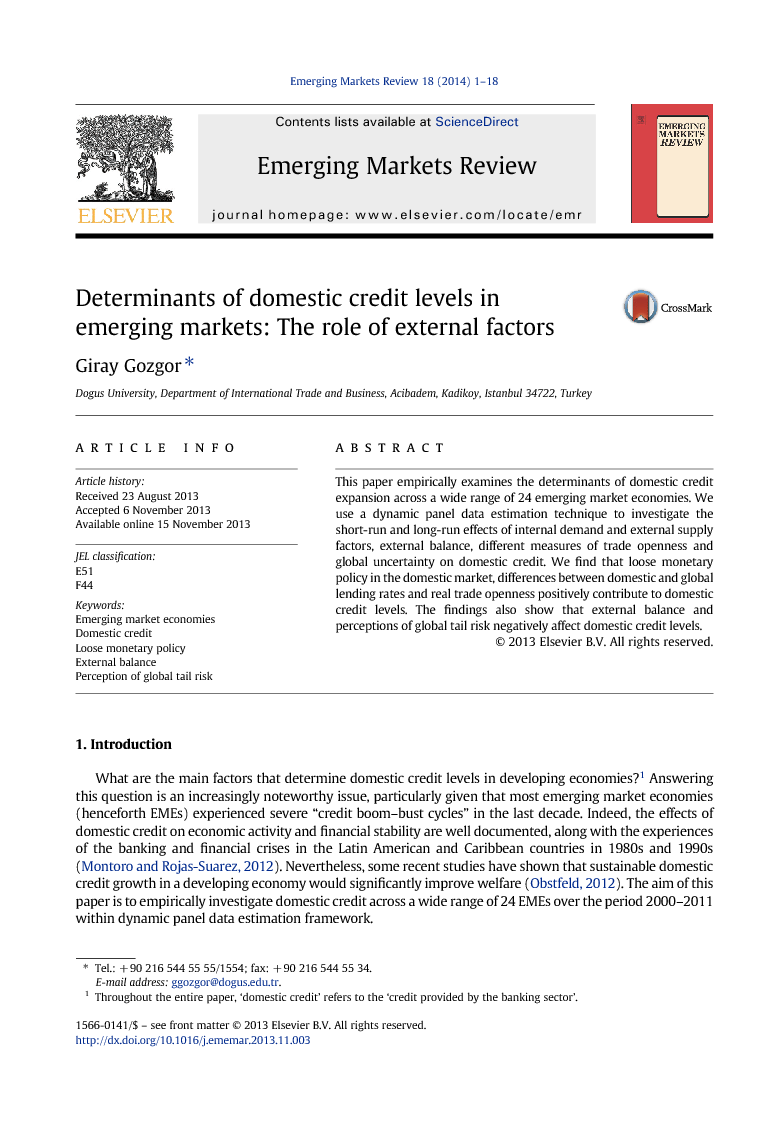 What are the main factors that determine domestic credit levels in developing economies?1 Answering this question is an increasingly noteworthy issue, particularly given that most emerging market economies (henceforth EMEs) experienced severe “credit boom–bust cycles” in the last decade. Indeed, the effects of domestic credit on economic activity and financial stability are well documented, along with the experiences of the banking and financial crises in the Latin American and Caribbean countries in 1980s and 1990s (Montoro and Rojas-Suarez, 2012). Nevertheless, some recent studies have shown that sustainable domestic credit growth in a developing economy would significantly improve welfare (Obstfeld, 2012). The aim of this paper is to empirically investigate domestic credit across a wide range of 24 EMEs over the period 2000–2011 within dynamic panel data estimation framework. In fact, a growing number of empirical studies, such as Mendoza and Terrones (2008), Obstfeld and Rogoff (2010), Jorda et al. (2011), Schularick and Taylor (2012), and Gourinchas and Obstfeld (2012), indicate that a rapid increase in domestic credit availability could play a statistically and economically significant role in predicting subsequent financial or economic crises. As with an upsurge in domestic credit, a deep decline in domestic credit can cause declining economic activity and financial instability. For instance, Gourinchas and Obstfeld (2012) show that the relative strength of EMEs during the great global recession of 2008–09 was related to their avoidance of domestic credit booms in the preceding years. They document that this was not the case for EMEs in Central and Eastern Europe, where the effects of the global crisis were notably severe. The great global recession of 2008–09 also reflected one type of asset price bubble, referred to as a “credit-driven bubble”, which can be notably hazardous (Mishkin, 2010). Domestic credit is also found to be a significant determinant of domestic private investment in developing economies in general therefore understanding the determinants of domestic credit is important (Luca and Spatafora, 2012). In addition, healthy availability of domestic credit instead of external financing would help ease the pressure coming from the exchange rate risk on domestic firms, particularly in an economic or a political downturn (Fernandez-Villaverde et al., 2013). Hence, the possible causes of domestic credit cycles in EMEs deserve further investigation for both theoretical and macroeconomic policy reasons. As discussed in Section 2 below, there is a growing empirical literature examining the determinants of domestic credit in EMEs, but possible decisive factors remain unclear. Moreover, the determinants of domestic credit levels appear to be complex (Elekdag and Han, 2012). The ability to borrow from abroad allows a developing country to borrow at lower interest rates and with less pressure on the nominal exchange rate and thus on inflation than if the country is economically and financially closed (Obstfeld, 2012). Thus, domestic credit may not only be driven by internal demand factors, such as stronger economic growth, falling real interest rates, rising inflation and rising money stocks, but also by external supply factors, such as global liquidity, global market conditions, and external imbalances. In view of the deep decline in domestic credit in EMEs during the period of the great global recession, the literature also suggests that exchange rate flexibility – the nominal value of the exchange rate – capital flows, and degree of trade openness might also affect domestic credit availability in EMEs. This paper investigates not only the systematic relationship between domestic credit and fundamental internal demand and external supply factors but also takes into account the value of nominal exchange rates, domestic and global liquidity conditions, private capital flows, and differences between domestic and global lending rates. Following Edwards (2012) and Lane and McQuade (2013), we also separately control for the effects on domestic credit availability of external balance indicators, such as the external balance on goods and services (balance of trade) and the current account balance as well as nominal and real trade openness measures. On the other hand, we re-examine recent empirical findings by considering the period effect of the great global recession and the effect on EME credit levels of perceived global risk and global uncertainty. This study seeks to contribute to the existing literature in several ways. To the best of our knowledge, this paper is the first to examine the effects on domestic credit expansion in EMEs of both internal macroeconomic demand and external financial supply factors while controlling for external balances and real trade openness. Second, this is the first study to analyze the persistence of domestic credit. For this purpose, we initially determine the cross-sectional dependence of domestic credit availability across 24 EMEs using the formal test of cross-sectional dependence of Pesaran (2004) and applying the “second generation” panel unit root test of Pesaran (2007). Third, following findings of significant persistence in domestic credit expansion, this paper is the first to utilize the robust and efficient dynamic panel estimation technique of Arellano and Bond (1991) to examine the determinants of domestic credit expansion in EMEs. This method allows us to obtain both short-run and long-run coefficients, a point of distinction from other studies, which have generally run fixed effects panel data estimations. Fourth, we systematically re-assess our main empirical findings with a special focus on global uncertainty and perceived global risk indicators as well as the period effect of the great global recession. Within this context, this is the first study to examine Standard and Poor's (S&P 500) Volatility (VIX) and the S&P 500 Skewness (SKEW) indices of the Chicago Board Options Exchange (CBOE) as factors in domestic credit levels in EMEs. In this paper we find that loose monetary policy in the domestic market, differences in domestic and global lending rates and the degree of real trade openness contribute positively to domestic credit expansion in EMEs. Our results also indicate that external balances and perceptions of global tail risk are negatively associated with domestic credit expansion in EMEs. The remainder of this paper is organized as follows. Section 2 briefly reviews the related literature. Section 3 summarizes our data and methodology. Section 4 explains and discusses our empirical results. Section 5 checks the robustness of our empirical results. Section 6 discusses the implications of our empirical results. Section 7 presents the concluding remarks.

This paper empirically investigates the determinants of domestic credit across a wide range of 24 EMEs over the period 2000–2011. We use dynamic panel data estimation techniques to examine the short-run and long-run effects of internal demand and external supply factors, external balances, and different measures of global economic and financial market conditions on domestic credit levels. We check the robustness of our empirical findings by considering the effects on domestic credit levels in EMEs of perceived global risk and global uncertainty as well as the period effect of the great global recession of 2008–09. We obtain several notable empirical results. First, we find a strong persistence of domestic credit in EMEs, a finding we confirm using the second generation PUR test of Pesaran (2007). This result allows us to distinguish between the short run and the long run in interpreting the coefficients of the explanatory variables. Second, the empirical results indicate that loose monetary policy conditions in the domestic market, lending rate differences between domestic and global markets, and real trade openness systematically and positively contribute to domestic credit expansion. Third, we find that external balances contribute negatively to domestic credit expansion. Fourth, we find that perceived risk of extreme negative movements in global financial markets suppresses domestic credit. Within this context, we investigate the economic and financial roots of our empirical results and discuss possible implications in the literature. The main empirical findings in this paper concern the role of loose monetary policy in domestic credit expansion, a result in line with Aisen and Franken (2010), Guo, and Stepanyan (2011), Elekdag and Wu (2011), Elekdag and Han (2012), and Magud et al. (2012). The remaining results also accord with recent papers, such as those by Takats (2010), Mendoza and Terrones (2012), and Lane and McQuade (2013). Future studies of this issue might use different panel data estimation techniques, such as the system GMM panel and bias-corrected least square dummy variable estimators, to examine possible determinants of domestic credit levels in EMEs. On the other hand, another empirical strategy is that to employ a regime-dependent model for understanding behavior of domestic credit in EMEs. However, we also leave it to another study.