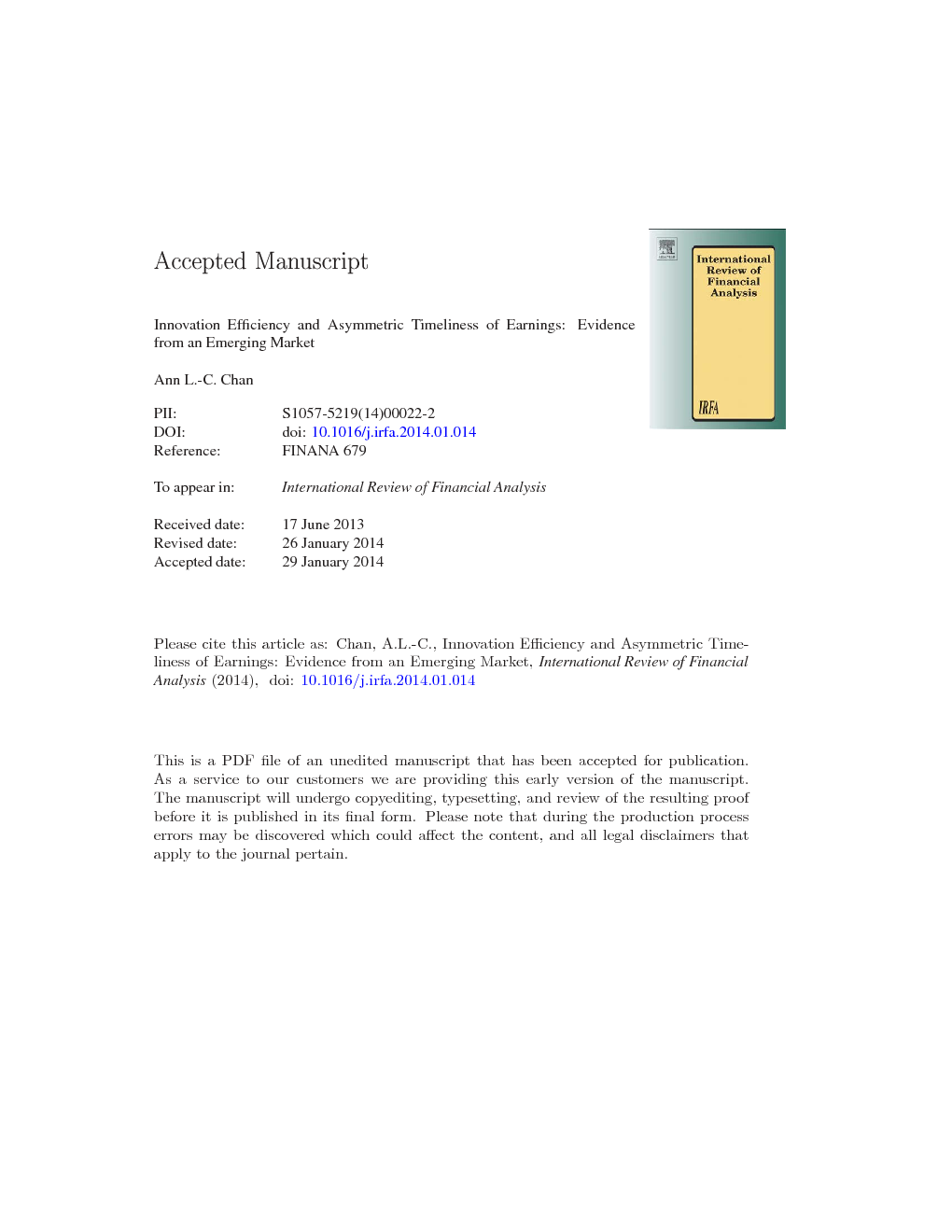 This study investigates the impact of intellectual capital output on the asymmetric income timeliness of firms in Taiwan, which is an emerging economy with a high concentration of research and development (R&D)-intensive firms but poor investor protection. The higher growth opportunities and increased risk faced by R&D firms makes them more vulnerable to shareholder litigation. Specifically, I examine whether companies that are less efficient at transforming new ideas or techniques into granted patents are more timely in their recognition of losses and less timely in their recognition of gains in response to higher expected litigation costs. Indeed, I observe a negative relationship between innovation efficiency and asymmetric income timeliness and this is more evident among highly R&D-intensive firms. In a parallel analysis, I also find that the observed greater earnings conservatism of low-innovation-efficient firms is more evident following the introduction of the Securities and Futures Investor Protection Act in the year 2003, when a class action litigation mechanism was established. Together, these findings highlight the role of accounting conservatism in mitigating the potential litigation risk faced by high-tech industries.

Earnings conservatism facilitates efficient contracting and serves as a natural defense against litigation. R&D activities cause intangible assets to grow but are also likely to induce asymmetric information between the management and the outside investors and lead to potential shareholder litigation. The granting of patents conveys valuable information about successful scientific and technological developments and may mitigate R&D-related information asymmetry and reduce expected litigation risks. The empirical evidence of this study implies that the providers and users of financial statements recognize the verifiability of accounting information, and further confirms that conservatism is an equilibrium mechanism for mitigating the value reductions and agency costs due to information asymmetry. The findings indicate that earnings conservatism in response to R&D-related asymmetric information and litigation risk exists mainly in less innovation-efficient firms. This evidence is more pronounced among highly R&D-intensive firms. Despite the fact that R&D outlays are generally expensed, which preempts the level of conditional conservatism through lower recorded assets, my findings imply that less innovation-efficient firms recognize losses in a timely manner (e.g., through larger asset write-offs on recorded assets, or restructuring charges) as a defense against litigation. Additional analyses controlling for conference calls and corporate governance mechanisms confirm the main findings. In parallel, I provide evidence showing that asymmetric income timeliness exists in the period since the shareholder class action mechanism was established and that such evidence is more pronounced for less innovation-efficient firms. These results may be generalizable to other emerging markets where the information environment tends to be less transparent. Overall, the findings of this study further substantiate the importance of earnings conservatism in facilitating efficient contracting and risk reduction, particularly in an emerging market characterized by high-technology but with weaker investor protection.