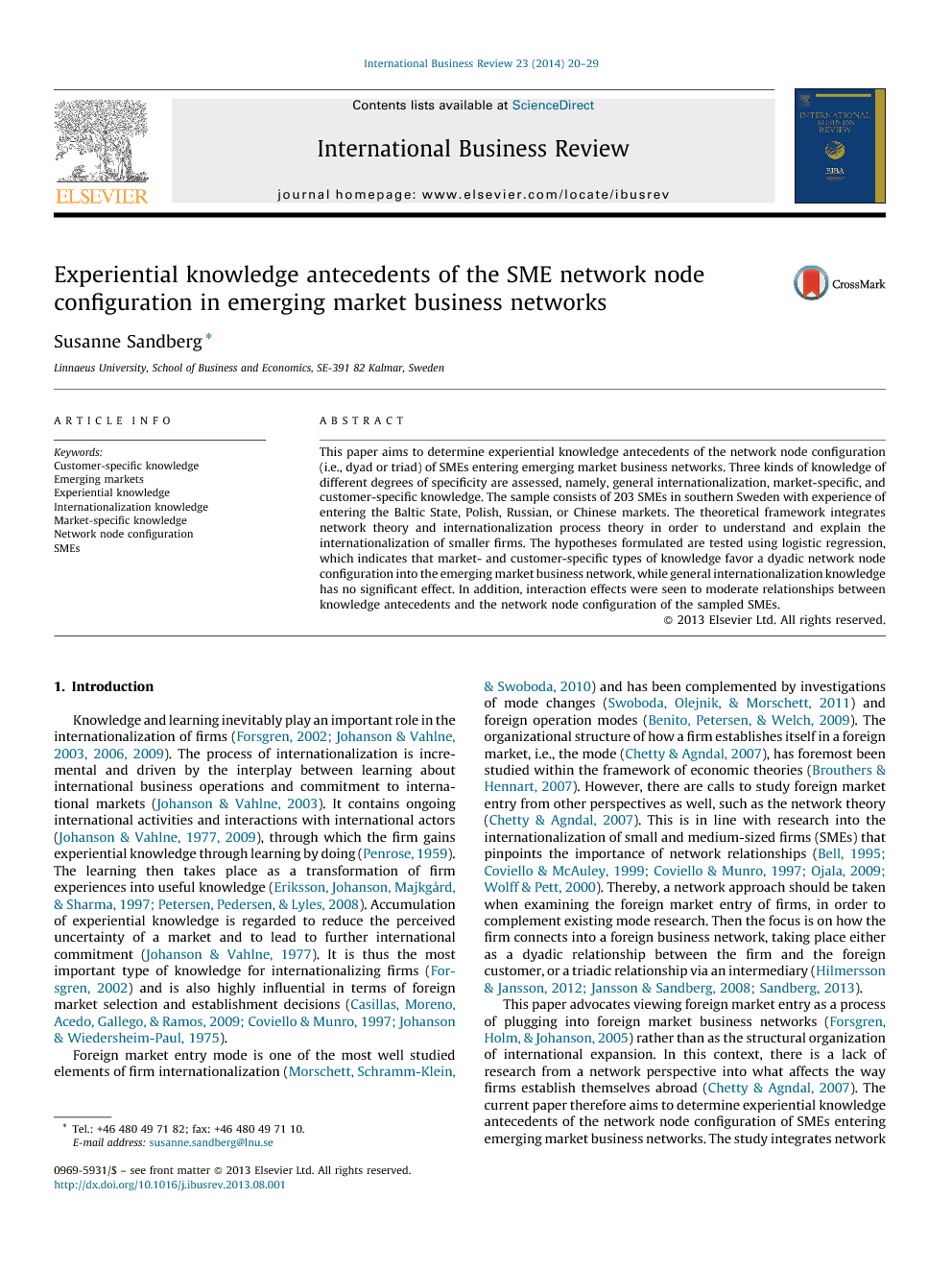 This paper aims to determine experiential knowledge antecedents of the network node configuration (i.e., dyad or triad) of SMEs entering emerging market business networks. Three kinds of knowledge of different degrees of specificity are assessed, namely, general internationalization, market-specific, and customer-specific knowledge. The sample consists of 203 SMEs in southern Sweden with experience of entering the Baltic State, Polish, Russian, or Chinese markets. The theoretical framework integrates network theory and internationalization process theory in order to understand and explain the internationalization of smaller firms. The hypotheses formulated are tested using logistic regression, which indicates that market- and customer-specific types of knowledge favor a dyadic network node configuration into the emerging market business network, while general internationalization knowledge has no significant effect. In addition, interaction effects were seen to moderate relationships between knowledge antecedents and the network node configuration of the sampled SMEs.

Knowledge and learning inevitably play an important role in the internationalization of firms (Forsgren, 2002, Johanson and Vahlne, 2003, Johanson and Vahlne, 2006 and Johanson and Vahlne, 2009). The process of internationalization is incremental and driven by the interplay between learning about international business operations and commitment to international markets (Johanson & Vahlne, 2003). It contains ongoing international activities and interactions with international actors (Johanson and Vahlne, 1977 and Johanson and Vahlne, 2009), through which the firm gains experiential knowledge through learning by doing (Penrose, 1959). The learning then takes place as a transformation of firm experiences into useful knowledge (Eriksson et al., 1997 and Petersen et al., 2008). Accumulation of experiential knowledge is regarded to reduce the perceived uncertainty of a market and to lead to further international commitment (Johanson & Vahlne, 1977). It is thus the most important type of knowledge for internationalizing firms (Forsgren, 2002) and is also highly influential in terms of foreign market selection and establishment decisions (Casillas et al., 2009, Coviello and Munro, 1997 and Johanson and Wiedersheim-Paul, 1975). Foreign market entry mode is one of the most well studied elements of firm internationalization (Morschett, Schramm-Klein, & Swoboda, 2010) and has been complemented by investigations of mode changes (Swoboda, Olejnik, & Morschett, 2011) and foreign operation modes (Benito, Petersen, & Welch, 2009). The organizational structure of how a firm establishes itself in a foreign market, i.e., the mode (Chetty & Agndal, 2007), has foremost been studied within the framework of economic theories (Brouthers & Hennart, 2007). However, there are calls to study foreign market entry from other perspectives as well, such as the network theory (Chetty & Agndal, 2007). This is in line with research into the internationalization of small and medium-sized firms (SMEs) that pinpoints the importance of network relationships (Bell, 1995, Coviello and McAuley, 1999, Coviello and Munro, 1997, Ojala, 2009 and Wolff and Pett, 2000). Thereby, a network approach should be taken when examining the foreign market entry of firms, in order to complement existing mode research. Then the focus is on how the firm connects into a foreign business network, taking place either as a dyadic relationship between the firm and the foreign customer, or a triadic relationship via an intermediary (Hilmersson and Jansson, 2012, Jansson and Sandberg, 2008 and Sandberg, 2013). This paper advocates viewing foreign market entry as a process of plugging into foreign market business networks (Forsgren, Holm, & Johanson, 2005) rather than as the structural organization of international expansion. In this context, there is a lack of research from a network perspective into what affects the way firms establish themselves abroad (Chetty & Agndal, 2007). The current paper therefore aims to determine experiential knowledge antecedents of the network node configuration of SMEs entering emerging market business networks. The study integrates network theory and internationalization process theory in order to understand and explain the internationalization of smaller firms (Bell et al., 2003, Coviello and McAuley, 1999, Johanson and Vahlne, 1990, Johanson and Vahlne, 2003 and Meyer and Skak, 2002). It thereby answers to calls for new models of internationalization (Fillis, 2001 and Meyer and Gelbuda, 2006). The research questions are: (1) what knowledge antecedents affect the network node configuration of SMEs in emerging markets, and (2) what interaction effects moderate the relationships between different kinds of knowledge and the network node configuration? These questions will be answered by testing three kinds of knowledge of different degrees of specificity, i.e., general internationalization, market-specific, and customer-specific knowledge, as antecedents of the network node configuration in which the firm has established either a dyad or a triad as the way to connect to the customer in the foreign market. The research will be based on a study of SMEs entering emerging markets. Studies and theorizing regarding firm internationalization processes have generally focused on multinational corporations rather than smaller firms (e.g., Coviello and McAuley, 1999, Coviello and Munro, 1997 and Fillis, 2001). Small firm size is considered a disadvantage in internationalization, since SMEs (here defined as companies with fewer than 250 employees, following the EU definition) often lack the resources necessary to enter foreign markets (Jansson, 2007a and Meyer and Skak, 2002), such as relevant experience and network relationships (Eriksson et al., 1997 and Fletcher and Harris, 2012). The geographical context is emerging markets, which are the main growth areas of the world due to their rapid economic and structural development (Cavusgil, Ghauri, & Agarwal, 2002). As such, they are important grounds for international business activities (Meyer & Gelbuda, 2006), though their business environments differ from those of mature markets (Ghauri and Holstius, 1996 and Meyer, 2001). As a result, it has been challenged whether the existing knowledge base of firms is applicable when entering emerging markets or not (Hilmersson, 2011 and Salmi, 2000). The paper first presents the theoretical framework, hypotheses, and research model. Section 3 then describes the sample, data collection, measurement of variables, and analytical technique. The paper ends with a discussion of the results and the conclusions, managerial implications, as well as limitations of the research and suggestions for further research.