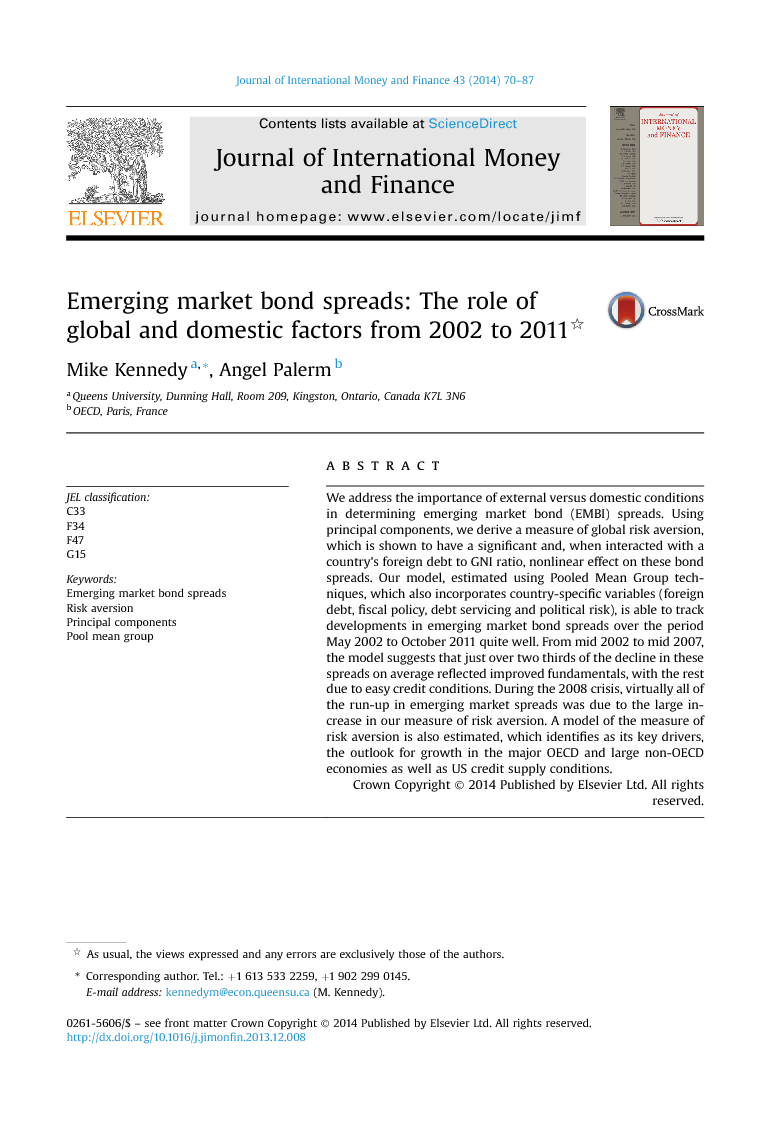 We address the importance of external versus domestic conditions in determining emerging market bond (EMBI) spreads. Using principal components, we derive a measure of global risk aversion, which is shown to have a significant and, when interacted with a country's foreign debt to GNI ratio, nonlinear effect on these bond spreads. Our model, estimated using Pooled Mean Group techniques, which also incorporates country-specific variables (foreign debt, fiscal policy, debt servicing and political risk), is able to track developments in emerging market bond spreads over the period May 2002 to October 2011 quite well. From mid 2002 to mid 2007, the model suggests that just over two thirds of the decline in these spreads on average reflected improved fundamentals, with the rest due to easy credit conditions. During the 2008 crisis, virtually all of the run-up in emerging market spreads was due to the large increase in our measure of risk aversion. A model of the measure of risk aversion is also estimated, which identifies as its key drivers, the outlook for growth in the major OECD and large non-OECD economies as well as US credit supply conditions.

The interest rate spreads that emerging market economies pay to borrow in international financial markets over those of US Treasuries – EMBI spreads1 – measure not only their costs of funds but as well provide a gauge of their financial fragility and vulnerability. These features of the data have generated a great deal of empirical research in policy, business and academic circles,2 aimed at understanding their determinants. An important focus of this research is on the role of external versus country-specific factors. To examine the issue of external versus domestic factors, we look at the period from May 2002 until October 2011, which seems ideally suited for this purpose. To begin with, during this time period shocks emanated largely from advanced economies, notably the 2008 credit crisis that started in the United States. But in contrast to earlier periods, it was also a time when a number of emerging market economies were making genuine progress toward improving macroeconomic fundamentals (lowering inflation and improving fiscal balances), although progress on structural reforms was less pronounced. Examining this period should allow us to gauge any benefits these economies may have realised from their policy efforts when faced with large external shocks. While this sample period excludes a time when many emerging market economies suffered home-grown crises, these events have been well covered by others. That said, we recognize that there is a cost to excluding the earlier period in that some information is lost. To determine the role of external conditions on EMBI spreads, we construct a measure of global risk aversion (hereafter, risk) based on the first two principal components calculated from a number of US and EU corporate bond spreads of varying degrees of risk as well as a US equity-price risk premium. In a model, estimated using Pooled Mean Group (PMG) techniques, we find this measure to have a significant and non-linear effect on EMBI spreads. The model also assigns important roles to country-specific factors – external debt, fiscal policy, interest payments and political risk. In dynamic simulations, the model is able to track actual spreads quite closely. In addition, based on a credit-channel framework, we find that the constructed risk measure is well explained by measures of global aggregate demand and US credit supply conditions. We use the first model to examine developments in EMBI spreads over the first half of the sample period as well as during the 2008 financial crisis and the second to investigate more closely the forces that drove the sharp run-up in external risk conditions in December 2008. The plan of the rest of the paper is as follows. The next Section (2) presents a brief description of the basic theoretical model of EMBI spreads (something that has become an “industry standard”) coupled with a selective (hopefully representative) review of the empirical literature. The subsequent 3 sections (3–5) deal with the construction of the model for EMBI spreads and describe, respectively: the data used (where attention is paid to our proposed risk measure); the estimation strategy and empirical results; and the performance of the model over the first half of the period and during the 2008 global crisis. Section 6 presents our model of the risk measure and discusses the contribution of its main drivers. The final section concludes with some policy implications.

The two models presented here are capable of explaining a lot of the observed variation seen in both EMBI spreads as well as in the risk measure, which played a key role in propagating the crisis to emerging markets. The model for EMBI spreads also has a number of important policy implications, related to the role of external versus domestic influences on spreads, which were only touched upon above. Our work suggests that, during the subprime crisis, it was movements in the risk measure that explained much of the observed changes in EMBI spreads. But as well the data suggest that markets in the recent crisis differentiated between countries and that this was in part related to domestic fundamentals. Our empirical results indicate that countries with viable fiscal positions, low external debt levels, low political risk and importantly healthy foreign exchange reserves faired better. To get a better handle on why we reach these conclusions we need to bear in mind the functional form of the model, in particular, the fact that the coefficients associated with the risk variable are semi-elastic.23 Because of this, the response to a risk shock in terms of basis points will depend on the existing level of the spread. The higher is that level, the larger will be the increase in terms of basis points. The significance of the political risk variable as well as the size of its coefficient suggests that actions to reduce this type of risk will result in significant reductions in the level of borrowing costs as well as helping to lessen adverse effects from large external shocks. Looking at the period prior to the crisis, our results suggest that, after accounting for the effect of Argentina, about two thirds of the decline in spreads observed over the first half of the sample was attributable to better domestic fundamentals. Improved fiscal balances accounted for just over 9 per cent of the declines. Fiscal policy is something that governments can control. As noted above, there is also evidence that the composition of fiscal spending matters, with markets giving credit to improvements in infrastructure. In addition, lower external debt contributed to a further 13 per cent drop in the level of spreads. That said, by far the major contributor to the decline in spreads during the first half of the period was due to declines in interest payments as a per cent of foreign exchange reserves, with a large part of the effect coming from rising levels of foreign exchange reserves. While increases in reserves have paid dividends to emerging market economies in the form of lower spreads, this has to be balanced off by other negative factors. First of all, these policies have led to tensions in the international community since a part of these increases in some cases has been due the maintenance of undervalued exchange rates. Although such policies have encouraged exports, they have also raised inflation risks. As well, as often as not, foreign exchange reserves are held in low-yielding US government bonds with attendant risks that, in the likely event that US bond rates will rise in the future, these economies would suffer large capital loses. At some point, these economies will be under pressure (likely from markets) to permit more flexibility in their exchange rate. To ensure that there is a smooth transition, countries should concentrate on improving other domestic fundamentals, notably fiscal balances as well as lowering political risk factors. Such policies would help as well to lessen the adverse fallout from external risk developments.