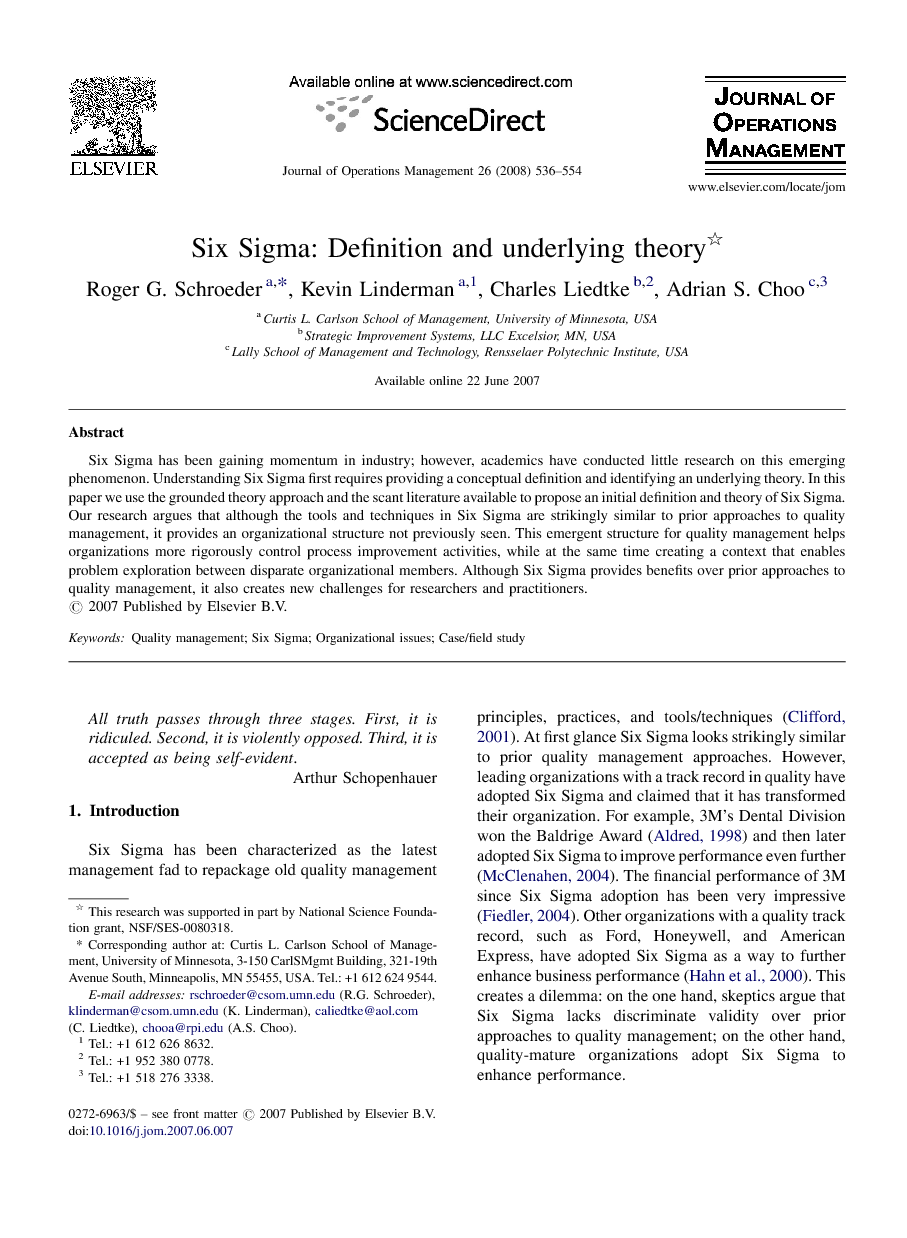 Six Sigma has been gaining momentum in industry; however, academics have conducted little research on this emerging phenomenon. Understanding Six Sigma first requires providing a conceptual definition and identifying an underlying theory. In this paper we use the grounded theory approach and the scant literature available to propose an initial definition and theory of Six Sigma. Our research argues that although the tools and techniques in Six Sigma are strikingly similar to prior approaches to quality management, it provides an organizational structure not previously seen. This emergent structure for quality management helps organizations more rigorously control process improvement activities, while at the same time creating a context that enables problem exploration between disparate organizational members. Although Six Sigma provides benefits over prior approaches to quality management, it also creates new challenges for researchers and practitioners.

Six Sigma has been characterized as the latest management fad to repackage old quality management principles, practices, and tools/techniques (Clifford, 2001). At first glance Six Sigma looks strikingly similar to prior quality management approaches. However, leading organizations with a track record in quality have adopted Six Sigma and claimed that it has transformed their organization. For example, 3M's Dental Division won the Baldrige Award (Aldred, 1998) and then later adopted Six Sigma to improve performance even further (McClenahen, 2004). The financial performance of 3M since Six Sigma adoption has been very impressive (Fiedler, 2004). Other organizations with a quality track record, such as Ford, Honeywell, and American Express, have adopted Six Sigma as a way to further enhance business performance (Hahn et al., 2000). This creates a dilemma: on the one hand, skeptics argue that Six Sigma lacks discriminate validity over prior approaches to quality management; on the other hand, quality-mature organizations adopt Six Sigma to enhance performance. Scholarly inquiry into this management approach has been limited. While many books and papers on Six Sigma have emerged in the practitioner literature (Breyfogle, 1999, Harry and Schroeder, 2000 and Pande et al., 2000), academic research on Six Sigma is just beginning to come forward. Scholarly research is needed to develop an in-depth, scientific understanding of Six Sigma and separate fact from fiction. This paper finds that indeed the philosophy and tools/techniques of Six Sigma are strikingly similar to prior quality management approaches. However, the way Six Sigma is practiced represents a new organization structural approach to improvement. Six Sigma helps an organization become more ambidextrous by providing a switching structure ( Daft, 2001) that allows the organization to act more organically in coming up with new improvement ideas and operate more mechanistically when implementing them. Furthermore, the structure of Six Sigma employs numerous mechanisms that simultaneously promote the conflicting demands of exploration and control in the improvement effort. As a result, what is new in Six Sigma when compared to prior quality management approaches is more its organizational implementation rather than the underlying philosophy or the quality tools/techniques employed. At this early stage in the development of scientific knowledge about Six Sigma, academic research needs to address three questions: 1. What is the base definition of Six Sigma and possible variants? 2. What is the theoretical basis underlying Six Sigma? 3. What is new about Six Sigma relative to the existing literature? Our research addresses these questions using a grounded theory approach. This approach helps develop an in-depth, relevant understanding of poorly understood phenomena (Eisenhardt, 1989, Meredith, 1998 and Yin, 1994). Since no clear definition or theory has emerged to explain Six Sigma, conceptual development can take place by using field observation, the literature, and/or pure thought. This paper employs all three approaches to provide a solid basis for the emergent theory development and subsequent testing. After discussing the literature in the next section, we define Six Sigma from our grounded theory research and propose an underlying theory for Six Sigma. We then address what is new and propose some future research directions. The result in a grounded theory that has potential value for advancing the scientific understanding of Six Sigma.

We have proposed an emergent base definition of Six Sigma and an initial theory based on a grounded theory approach. Although Six Sigma builds off prior quality management practices and principles, it offers a new structure for improvement. The structural differences simultaneously promote both more control and exploration in improvement efforts. Some organizations may find benefit from the Six Sigma approach because it fits their organizational needs better. Academics need to better understand Six Sigma so that they do not overhype it or too quickly dismiss it as nothing new. By better defining and adequately understanding Six Sigma, scholars can develop a deeper and richer knowledge of this phenomenon. Our research makes four contributions: 1. It proposes a rigorous base definition of Six Sigma from the literature and field study that can be used for further research. A phenomenon cannot be scientifically studied until it is defined; therefore, we provide a starting point for future research on Six Sigma. 2. We provide an underlying theory for Six Sigma research derived from observation and the literature. The theory includes the concepts of ambidextrous organizations, parallel-meso organization, structural control and structural exploration. 3. We suggest well-grounded propositions and a framework for future empirical testing. 4. We differentiate Six Sigma from TQM and other quality management approaches in order to indicate what is new about this approach. There are some limitations to our research, including the fact that grounded theory has inherent weaknesses. The theory we have developed might require further refinement, but this is a normal part of the theory development and testing process. Nevertheless our grounded theory has a reasonable chance for empirical verification and a better chance than theory developed without the triangulation methods and grounded theory approach used here. The choice of the two companies studied in depth has perhaps limited the results in some ways. For example, neither company stressed cultural change to a large extent. Eckes (2001), for example, stresses the importance of cultural change along with technical change in an organization, and he proposes a comprehensive approach to cultural change. Finally, only MFG stressed the use of Six Sigma as a leadership development program in the company. MFG selected from among its best people, trained them as Black Belts, and assigned them to challenging processes in need of improvement. They also trained everyone in the company who was assigned to projects at the Green Belt level and clearly viewed Six Sigma as a way to train, reward, and promote future leaders. As we go forward in Six Sigma research, it is an opportune time to begin testing the theory that has been developed. This will require random sampling to empirically test and validate the propositions and theory provided. Such theory testing should add to our scientific knowledge regarding Six Sigma and can either verify or refute certain key elements of the definition and theory proposed here. We have also specified a number of additional research projects using contingency theory, organization learning, and organization change theories. It is only through academic research that a better understanding of Six Sigma can be developed. We hope that this initial effort will provide a beginning for future scientific research and a better understanding of this important phenomenon.