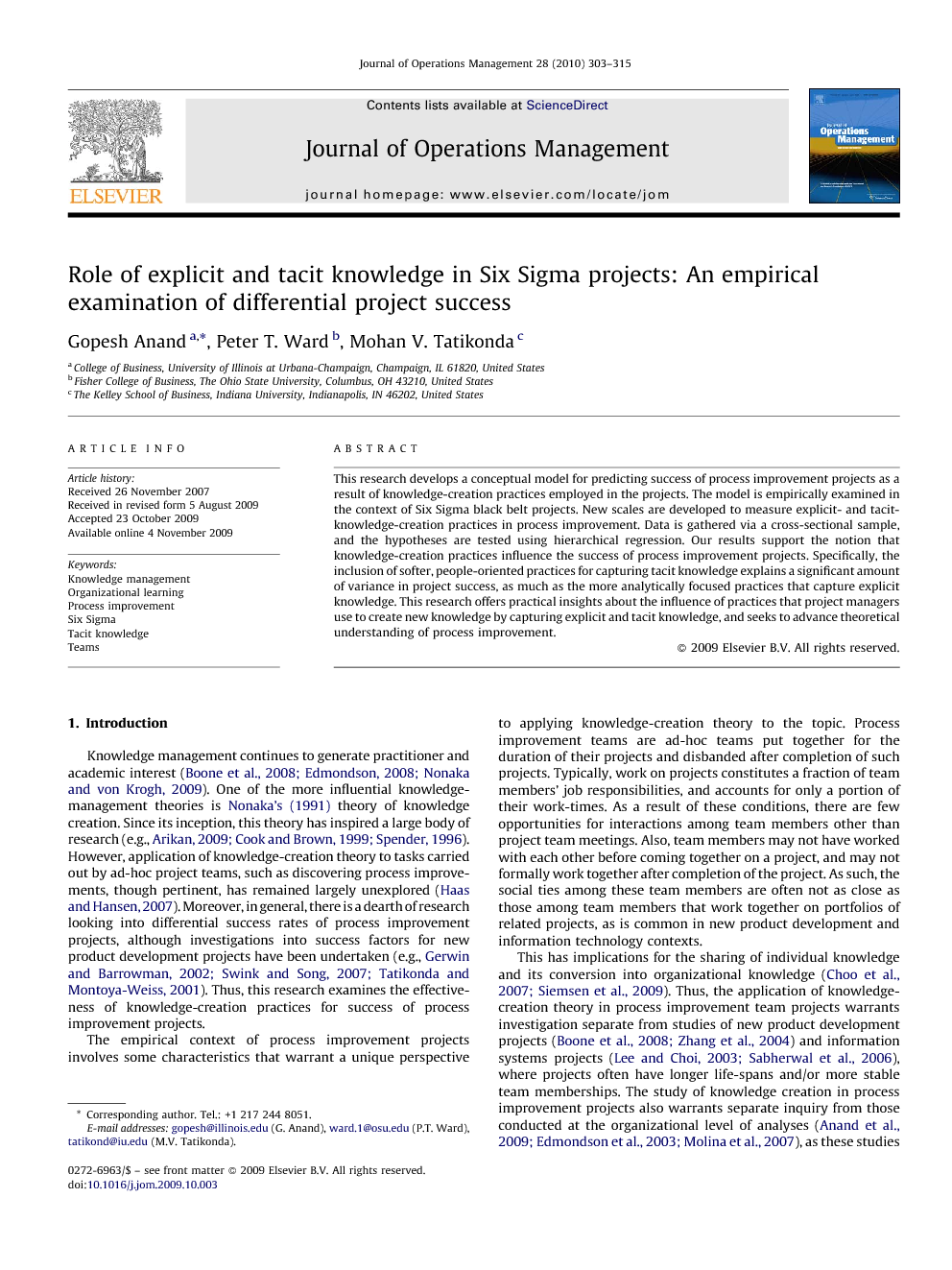 Knowledge management continues to generate practitioner and academic interest (Boone et al., 2008, Edmondson, 2008 and Nonaka and von Krogh, 2009). One of the more influential knowledge-management theories is Nonaka's (1991) theory of knowledge creation. Since its inception, this theory has inspired a large body of research (e.g., Arikan, 2009, Cook and Brown, 1999 and Spender, 1996). However, application of knowledge-creation theory to tasks carried out by ad-hoc project teams, such as discovering process improvements, though pertinent, has remained largely unexplored (Haas and Hansen, 2007). Moreover, in general, there is a dearth of research looking into differential success rates of process improvement projects, although investigations into success factors for new product development projects have been undertaken (e.g., Gerwin and Barrowman, 2002, Swink and Song, 2007 and Tatikonda and Montoya-Weiss, 2001). Thus, this research examines the effectiveness of knowledge-creation practices for success of process improvement projects. The empirical context of process improvement projects involves some characteristics that warrant a unique perspective to applying knowledge-creation theory to the topic. Process improvement teams are ad-hoc teams put together for the duration of their projects and disbanded after completion of such projects. Typically, work on projects constitutes a fraction of team members’ job responsibilities, and accounts for only a portion of their work-times. As a result of these conditions, there are few opportunities for interactions among team members other than project team meetings. Also, team members may not have worked with each other before coming together on a project, and may not formally work together after completion of the project. As such, the social ties among these team members are often not as close as those among team members that work together on portfolios of related projects, as is common in new product development and information technology contexts. This has implications for the sharing of individual knowledge and its conversion into organizational knowledge (Choo et al., 2007 and Siemsen et al., 2009). Thus, the application of knowledge-creation theory in process improvement team projects warrants investigation separate from studies of new product development projects (Boone et al., 2008 and Zhang et al., 2004) and information systems projects (Lee and Choi, 2003 and Sabherwal et al., 2006), where projects often have longer life-spans and/or more stable team memberships. The study of knowledge creation in process improvement projects also warrants separate inquiry from those conducted at the organizational level of analyses (Anand et al., 2009, Edmondson et al., 2003 and Molina et al., 2007), as these studies do not deal with practices for creating knowledge but focus instead on the topic of a broader environment conducive to knowledge management. There is a growing prevalence of process improvement initiatives that have the common characteristics of projects lasting for three to nine months, with each project led by a project methodology expert, and involving a diverse team constructed solely for the purpose of the project. Thus, we focus on the practices used by team leaders to extract and integrate knowledge of team members toward achieving project objectives. The topic of this paper is inherently multidisciplinary because process improvement is central to Operations Management, while knowledge creation in teams, which also involves team dynamics and leadership, is central to Organizational Behavior. This study responds to calls for incorporating human behavioral issues in Operations Management contexts (Bendoly and Hur, 2007, Boudreau et al., 2003 and Mantel et al., 2006). 1.1. Relevance of tacit knowledge The theory of knowledge creation (Nonaka, 1991) is based primarily on Polanyi's (1966) categorization of knowledge as explicit and tacit. It prescribes the capture of both explicit and tacit types of knowledge, making it available to the organization in order to generate competitive capabilities. Explicit knowledge is codified knowledge articulated in words, figures, and numbers. It is objective, and relatively easy to share in the form of specifications, standard operating procedures, and data. Tacit knowledge is knowledge that has not been codified and is relatively difficult-to-codify. It is subjective and based in individual experiences. Nonaka and Takeuchi (1995) point out that Western managers were more likely to overlook tacit knowledge than their Japanese counterparts, who were experts at capturing it. Particularly in the context of process improvement, the tendency to focus exclusively on explicit knowledge is exacerbated by the fact that most projects have objectives related to exploiting and controlling existing process capabilities (March, 1991 and Schroeder et al., 2008). The tendency for leaders of such projects to concentrate on explicit knowledge that is easier to capture, while getting blindsided by tacit knowledge that may be relevant, makes it important for practice and academia to examine the missed opportunities that may result from ignoring tacit knowledge.

Our results should be considered in light of certain limitations. The sample size of 98 projects from five companies prevents us from making stronger claims about the generalizability of the results. Future studies replicating our approach, but employing larger samples, are appropriate. Our scales for knowledge-creation practices did not discriminate between two ways of capturing tacit knowledge and two ways of capturing explicit knowledge as proposed by Nonaka (1994), and our two-factor solution extracted only 40% of the variance in the scale items. Further research is needed to (1) examine if there is, or is not, a finer grained classification of knowledge-creation practices applicable to process improvement projects, and (2) create measures for evaluating the extent to which practices in each category are used in projects. The single informant approach is not ideal. We controlled for external events, team size, and project duration, all aspects of project complexity. Still, future research can study other aspects of project complexity and other moderators which could influence relationships between knowledge-creation practices and project success. Although we verified that the VIF scores in our final regression model were within the maximum acceptable threshold, the high correlation between the two knowledge-creation variables may have affected some of our statistical results. The standard errors for each of the two predictors were not materially inflated, but the coefficient for technically oriented knowledge-creation practices did decline, from 0.33 (p ≤ 0.01) to 0.24 (p ≤ 0.10), when socially oriented knowledge-creation practices were entered into the regression. We studied knowledge-creation practices at the project/team level, but practices at the organizational level, such as job rotation practices, the existence of common meeting facilities, and cultural differences of team members and functions, may also affect the success of projects. Still, it is noteworthy that the independent variables in our study did explain 25% of variance in project success. This study did account for project leader experience, but did not delve into detailed demographic characteristics of team members. Future research should consider team experience and other team characteristics. Finally, more specific multi-item measures of each facet of project performance can also be developed. Our main finding is that practices used in team projects to extract team-member knowledge can be quite valuable for process improvement project success. This contributes to theoretical understanding in Operations Management and Organizational Behavior disciplines. Exploration of additional nuances of relationships between knowledge-creation approaches and process improvements requires further research. Examination of the cost–benefit implications of using different knowledge-creation approaches represents an opportunity for future researchers. Future investigation should better understand the state of evolution, or maturity, of a firm's Six Sigma initiative and the resultant impact on knowledge-creation practice selection and effectiveness. In addition, the scales we created for capturing explicit and tacit knowledge represent a contribution, and can be used to address questions on the types of projects for which it would be more beneficial to focus on one type of knowledge capture over another. Our approach shows that process improvement in general, and Six Sigma in particular, benefit from perspective and analysis at the project level of observation. The insights from this study on the role of knowledge creation in process improvement provide practical guidance for Six Sigma project leaders and other managers of process improvement projects and initiatives, especially in regards to the importance of capturing tacit knowledge.