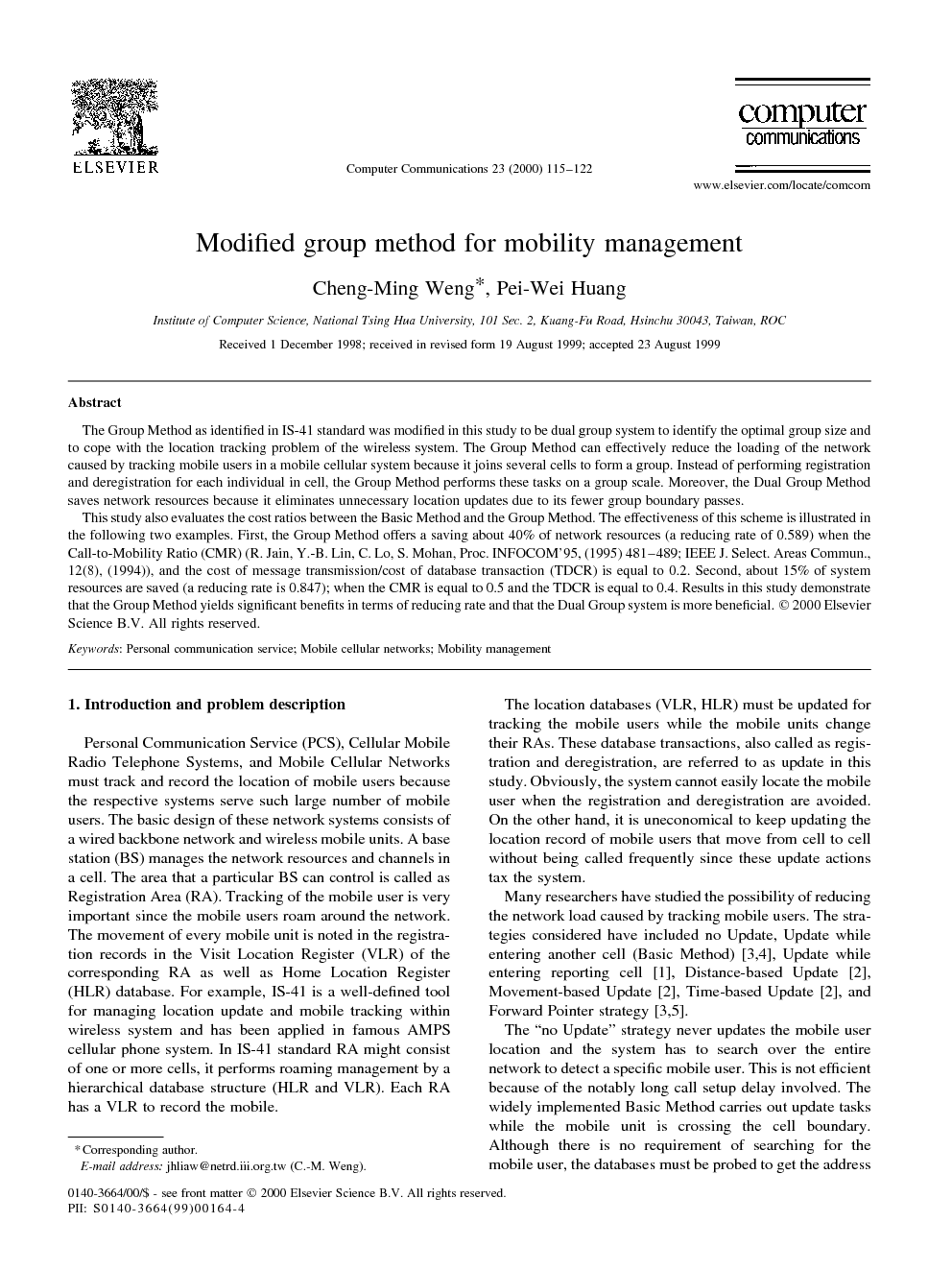 The Group Method as identified in IS-41 standard was modified in this study to be dual group system to identify the optimal group size and to cope with the location tracking problem of the wireless system. The Group Method can effectively reduce the loading of the network caused by tracking mobile users in a mobile cellular system because it joins several cells to form a group. Instead of performing registration and deregistration for each individual in cell, the Group Method performs these tasks on a group scale. Moreover, the Dual Group Method saves network resources because it eliminates unnecessary location updates due to its fewer group boundary passes. This study also evaluates the cost ratios between the Basic Method and the Group Method. The effectiveness of this scheme is illustrated in the following two examples. First, the Group Method offers a saving about 40% of network resources (a reducing rate of 0.589) when the Call-to-Mobility Ratio (CMR) (R. Jain, Y.-B. Lin, C. Lo, S. Mohan, Proc. INFOCOM’95, (1995) 481–489; IEEE J. Select. Areas Commun., 12(8), (1994)), and the cost of message transmission/cost of database transaction (TDCR) is equal to 0.2. Second, about 15% of system resources are saved (a reducing rate is 0.847); when the CMR is equal to 0.5 and the TDCR is equal to 0.4. Results in this study demonstrate that the Group Method yields significant benefits in terms of reducing rate and that the Dual Group system is more beneficial.

Personal Communication Service (PCS), Cellular Mobile Radio Telephone Systems, and Mobile Cellular Networks must track and record the location of mobile users because the respective systems serve such large number of mobile users. The basic design of these network systems consists of a wired backbone network and wireless mobile units. A base station (BS) manages the network resources and channels in a cell. The area that a particular BS can control is called as Registration Area (RA). Tracking of the mobile user is very important since the mobile users roam around the network. The movement of every mobile unit is noted in the registration records in the Visit Location Register (VLR) of the corresponding RA as well as Home Location Register (HLR) database. For example, IS-41 is a well-defined tool for managing location update and mobile tracking within wireless system and has been applied in famous AMPS cellular phone system. In IS-41 standard RA might consist of one or more cells, it performs roaming management by a hierarchical database structure (HLR and VLR). Each RA has a VLR to record the mobile. The location databases (VLR, HLR) must be updated for tracking the mobile users while the mobile units change their RAs. These database transactions, also called as registration and deregistration, are referred to as update in this study. Obviously, the system cannot easily locate the mobile user when the registration and deregistration are avoided. On the other hand, it is uneconomical to keep updating the location record of mobile users that move from cell to cell without being called frequently since these update actions tax the system. Many researchers have studied the possibility of reducing the network load caused by tracking mobile users. The strategies considered have included no Update, Update while entering another cell (Basic Method) [3] and [4], Update while entering reporting cell [1], Distance-based Update [2], Movement-based Update [2], Time-based Update [2], and Forward Pointer strategy [3] and [5]. The “no Update” strategy never updates the mobile user location and the system has to search over the entire network to detect a specific mobile user. This is not efficient because of the notably long call setup delay involved. The widely implemented Basic Method carries out update tasks while the mobile unit is crossing the cell boundary. Although there is no requirement of searching for the mobile user, the databases must be probed to get the address of the called party. The update of every motion of the mobile stations is expensive and needless for a mobile unit that is often moving but infrequently called. The Reporting cell strategy selects a cell to act as a reporting cell and the update tasks are completed while the mobile user is entering the reporting cell. The major disadvantages of the reporting cell strategy are: difficulty in choosing a reporting cell [1], which is a NP-hard problem, and the search for a mobile user has a network wide range. The essential ideas behind Distance-based Update, Movement-based Update, and Time-based Update are very similar; i.e. these strategies perform update tasks while the magnitudes of movement, distance, or time is over a threshold. The superiority of these magnitude-based strategies is that they are easily implemented. However, the weakness of these strategies is that the searching range is also network-wide. The Forward Pointer Strategy sets a forwarding pointer from old RA to new RA instead of updating the location databases. Although this system is low-cost and does not involve searching a mobile user network wide, redundant forward pointer setting still occurs. In addition, the longer the pointer chain, the longer is the call setup delay. The Group Method performs the update tasks while the mobile unit is crossing the boundary of group. Hence, the cost of update is saved within a group since this scheme allows the mobile unit to cross the cell boundary without updating. Additionally, the restricted group wide paging scope offers an advantage over the magnitude-based update strategies. The rest of this paper is organized as follows. Section 2 provides a description of the Group Method, and the Dual Group System. Section 3 presents a system performance evaluation. Section 4 consists of discussion of the other related issues. The concluding remarks are finally given in Section 5.

The Group Method yields a significant improvement over the conventional methods in terms of reduced cost. Moreover, the Group Method offers considerable enhancements in the utilization of network resources for particular kind of mobile users who move frequently and are seldom called. In addition, the further extension of the Group Method with Dual Group System offers even more improvement. There could be some way to shorten the call setup delay such as flood paging, or update within a group. These features render the Group Method more effective and especially excellent for reducing the undesired loading of the network caused by tracking mobile users.