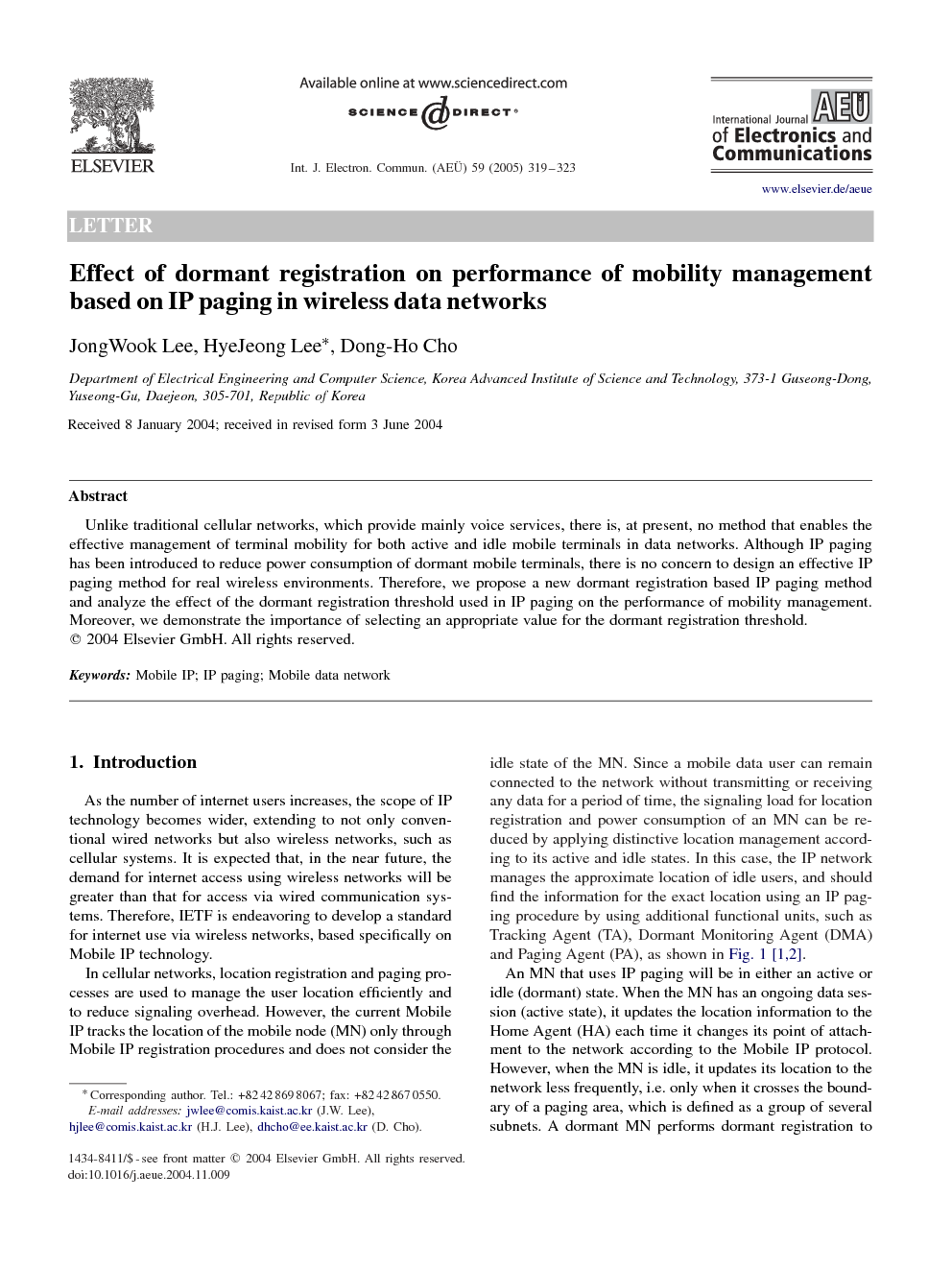 Unlike traditional cellular networks, which provide mainly voice services, there is, at present, no method that enables the effective management of terminal mobility for both active and idle mobile terminals in data networks. Although IP paging has been introduced to reduce power consumption of dormant mobile terminals, there is no concern to design an effective IP paging method for real wireless environments. Therefore, we propose a new dormant registration based IP paging method and analyze the effect of the dormant registration threshold used in IP paging on the performance of mobility management. Moreover, we demonstrate the importance of selecting an appropriate value for the dormant registration threshold.

As the number of internet users increases, the scope of IP technology becomes wider, extending to not only conventional wired networks but also wireless networks, such as cellular systems. It is expected that, in the near future, the demand for internet access using wireless networks will be greater than that for access via wired communication systems. Therefore, IETF is endeavoring to develop a standard for internet use via wireless networks, based specifically on Mobile IP technology. In cellular networks, location registration and paging processes are used to manage the user location efficiently and to reduce signaling overhead. However, the current Mobile IP tracks the location of the mobile node (MN) only through Mobile IP registration procedures and does not consider the idle state of the MN. Since a mobile data user can remain connected to the network without transmitting or receiving any data for a period of time, the signaling load for location registration and power consumption of an MN can be reduced by applying distinctive location management according to its active and idle states. In this case, the IP network manages the approximate location of idle users, and should find the information for the exact location using an IP paging procedure by using additional functional units, such as Tracking Agent (TA), Dormant Monitoring Agent (DMA) and Paging Agent (PA), as shown in Fig. 1[1] and [2]. An MN that uses IP paging will be in either an active or idle (dormant) state. When the MN has an ongoing data session (active state), it updates the location information to the Home Agent (HA) each time it changes its point of attachment to the network according to the Mobile IP protocol. However, when the MN is idle, it updates its location to the network less frequently, i.e. only when it crosses the boundary of a paging area, which is defined as a group of several subnets. A dormant MN performs dormant registration to the TA, which is responsible for location tracking of the MN that is adopting IP paging. When a packet destined for a dormant MN arrives at the HA, the HA transfers the packet to the DMA by tunnelling. The DMA buffers the packet, initiates the IP paging procedure through the PA, and makes the MN perform Mobile IP registration. Thus, the MN receives the buffered and subsequently transferred packets after Mobile IP registration occurs. If an MN is idle for a long time, its battery power can be saved and signaling overhead for location registration can be reduced. However, when there is a packet to be delivered to the MN, an additional paging procedure is required to locate the MN using IP paging. There has been a certain amount of research conducted on IP paging protocols. Ramjee presented the concept of paging in IP service and proposed three IP paging scenarios: home agent paging, foreign agent paging and domain paging [3]. In [4], Zhang showed that by extending the Mobile IP to support paging, Paging in Mobile IP (P-MIP) can reduce the signaling load in the core IP network, power consumption in the mobile nodes, and required radio resources. In addition, the steady-state probability of active and idle states in the P-MIP scheme has been derived and the P-MIP scheme's performance is compared with that of the conventional Mobile IP in [5]. An adaptive Per-Host IP paging method that considers traffic and mobility parameters of the mobile host has been proposed in [6]. With this method, the optimal paging area size for each mobile host is computed so as to minimize the signaling load for location management in the network. The mobile host recognizes that the paging area has been changed by comparing the paging area identifier. Each of the above papers has weaknesses. Previous research in papers [3], [4] and [5] did not focus on the performance enhancement of the IP paging protocols, but on the basic paging architecture, paging procedure and design of paging area. Moreover, the IP paging schemes are mainly static with respect to the size and the shape of the paging area. With only a static IP paging scheme, the signaling load and paging delay will not be optimized and terminal power and radio resources are wasted unnecessarily. On the other hand, the Per-Host IP paging scheme, which uses dynamic paging areas, is difficult to implement and has the overhead that each mobile host computes the optimal paging area size whenever it moves by considering various kinds of time-varying and host-specific parameters. In this paper, we propose a new concept of dormant registration threshold and consider the effect of dormant registration threshold on the performance of location management of mobile terminals. The rest of this paper is organized as follows. In Section 2, we provide details of our consideration for the dormant registration threshold of IP paging protocol. Section 3 describes simulation results that show the effect of the dormant registration threshold. We conclude the paper in Section 4.