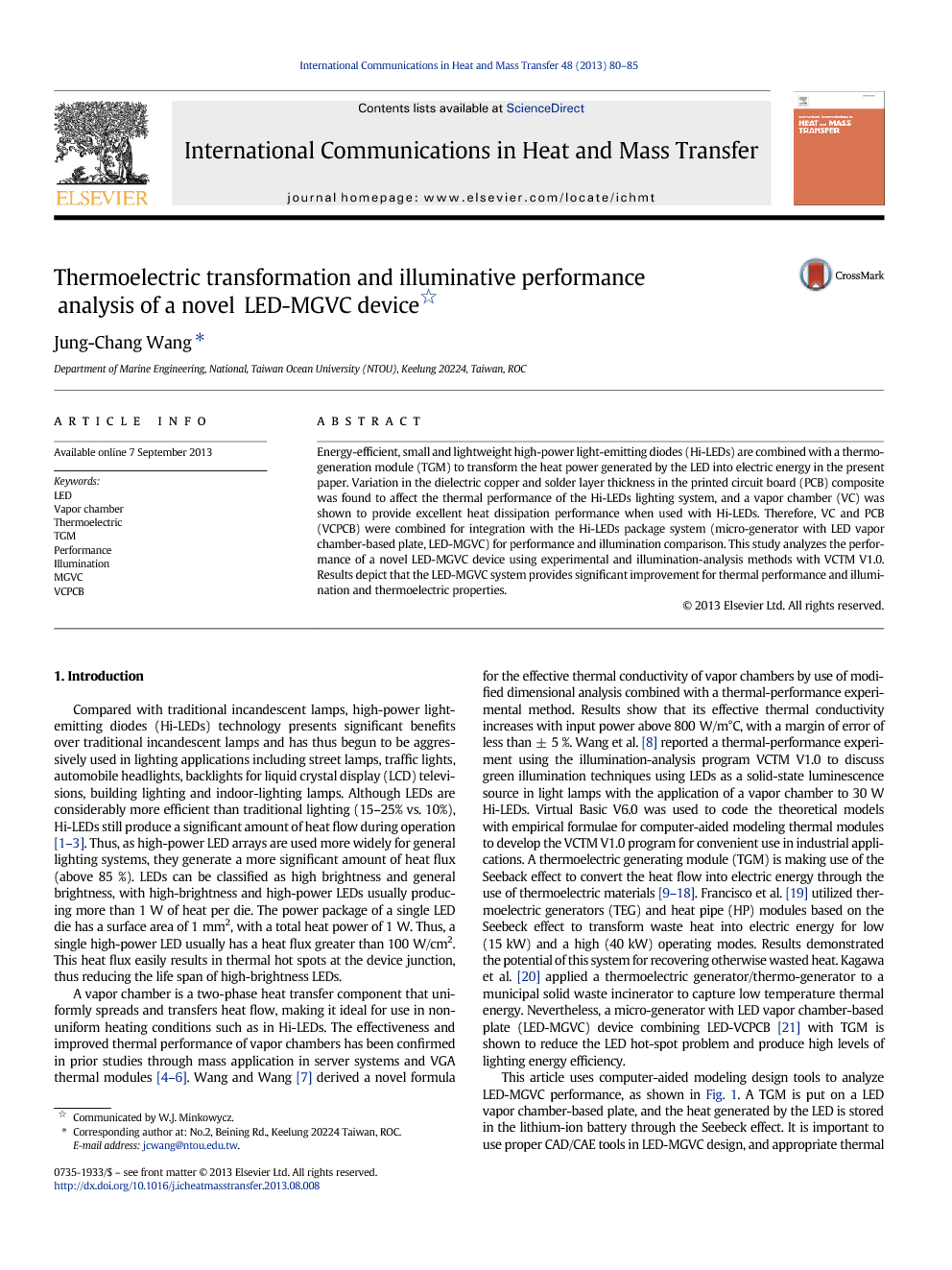 Energy-efficient, small and lightweight high-power light-emitting diodes (Hi-LEDs) are combined with a thermo-generation module (TGM) to transform the heat power generated by the LED into electric energy in the present paper. Variation in the dielectric copper and solder layer thickness in the printed circuit board (PCB) composite was found to affect the thermal performance of the Hi-LEDs lighting system, and a vapor chamber (VC) was shown to provide excellent heat dissipation performance when used with Hi-LEDs. Therefore, VC and PCB (VCPCB) were combined for integration with the Hi-LEDs package system (micro-generator with LED vapor chamber-based plate, LED-MGVC) for performance and illumination comparison. This study analyzes the performance of a novel LED-MGVC device using experimental and illumination-analysis methods with VCTM V1.0. Results depict that the LED-MGVC system provides significant improvement for thermal performance and illumination and thermoelectric properties.

Compared with traditional incandescent lamps, high-power light-emitting diodes (Hi-LEDs) technology presents significant benefits over traditional incandescent lamps and has thus begun to be aggressively used in lighting applications including street lamps, traffic lights, automobile headlights, backlights for liquid crystal display (LCD) televisions, building lighting and indoor-lighting lamps. Although LEDs are considerably more efficient than traditional lighting (15–25% vs. 10%), Hi-LEDs still produce a significant amount of heat flow during operation [1], [2] and [3]. Thus, as high-power LED arrays are used more widely for general lighting systems, they generate a more significant amount of heat flux (above 85 %). LEDs can be classified as high brightness and general brightness, with high-brightness and high-power LEDs usually producing more than 1 W of heat per die. The power package of a single LED die has a surface area of 1 mm2, with a total heat power of 1 W. Thus, a single high-power LED usually has a heat flux greater than 100 W/cm2. This heat flux easily results in thermal hot spots at the device junction, thus reducing the life span of high-brightness LEDs. A vapor chamber is a two-phase heat transfer component that uniformly spreads and transfers heat flow, making it ideal for use in non-uniform heating conditions such as in Hi-LEDs. The effectiveness and improved thermal performance of vapor chambers has been confirmed in prior studies through mass application in server systems and VGA thermal modules [4], [5] and [6]. Wang and Wang [7] derived a novel formula for the effective thermal conductivity of vapor chambers by use of modified dimensional analysis combined with a thermal-performance experimental method. Results show that its effective thermal conductivity increases with input power above 800 W/m°C, with a margin of error of less than ± 5 %. Wang et al. [8] reported a thermal-performance experiment using the illumination-analysis program VCTM V1.0 to discuss green illumination techniques using LEDs as a solid-state luminescence source in light lamps with the application of a vapor chamber to 30 W Hi-LEDs. Virtual Basic V6.0 was used to code the theoretical models with empirical formulae for computer-aided modeling thermal modules to develop the VCTM V1.0 program for convenient use in industrial applications. A thermoelectric generating module (TGM) is making use of the Seeback effect to convert the heat flow into electric energy through the use of thermoelectric materials [9], [10], [11], [12], [13], [14], [15], [16], [17] and [18]. Francisco et al. [19] utilized thermoelectric generators (TEG) and heat pipe (HP) modules based on the Seebeck effect to transform waste heat into electric energy for low (15 kW) and a high (40 kW) operating modes. Results demonstrated the potential of this system for recovering otherwise wasted heat. Kagawa et al. [20] applied a thermoelectric generator/thermo-generator to a municipal solid waste incinerator to capture low temperature thermal energy. Nevertheless, a micro-generator with LED vapor chamber-based plate (LED-MGVC) device combining LED-VCPCB [21] with TGM is shown to reduce the LED hot-spot problem and produce high levels of lighting energy efficiency. This article uses computer-aided modeling design tools to analyze LED-MGVC performance, as shown in Fig. 1. A TGM is put on a LED vapor chamber-based plate, and the heat generated by the LED is stored in the lithium-ion battery through the Seebeck effect. It is important to use proper CAD/CAE tools in LED-MGVC design, and appropriate thermal conditions were ensured through using a composite approach to LED-MGVC computer-aided modeling design. Several theoretical models for thermal modules have been developed, using software and algorithms to predict thermal, optical and electric performances in the computer-aided modeling design system, and the relevant programs and methods for computer-aided LED-MGVC design are introduced in the present paper. Full-size image (65 K) Fig. 1. Sketches of LED-MGVC: (a) 3-D drawing and (b) 2-D drawing.

This paper explores the power generation performance of two different LED module systems for power generation chips. Chip output power was found to increase with increase LED input power; with no significant difference between the two modules with LED input power of less than 6 W. As LED input power exceeded 6 W, the LED heat dissipation module with the vapor chamber was found to outperform the other LED cooling modules, with a maximum output power of 116.2 and 168 mW, respectively, for the type 1 and type 2 modules. The vapor chamber of the type 2 module generation chip was found to be superior to that of the type 1 module system with the non-uniform temperature plate. Mainly due to the vapor chamber under conditions of high heat flux, a higher heat transfer rate was obtained to rapidly conduct and dissipate heat from the LEDs to the surface of the power generation chip's hot end, and then to the cold end through the heat sink and cooling fan, thus transferring the heat to the air, resulting in the gradual increase of the temperature difference between the hot and cold sides of the generation chip. In addition, due to the LED heat conducting directly to the power generation chip, the LED heat dissipation MCPCB board cannot effectively conduct heat. In addition, the LED heat source area is smaller than that of the power generation chip, so most of the heat is dissipated directly into the air, resulting in thermal resistance. Heat cannot be effectively transferred to the hot end of the power generation chip, thus decreasing the temperature difference between the hot and cold sides, resulting in the output of the power generation chip being inferior to that of the LED module with a vapor chamber. However, in LED thermal management, about 80% of the electrical input power for high-power LED lighting will be wasted in the form of heat generated by the thermoelectric generating module (TGM). In evaluating the characteristics of micro-generator with LED vapor chamber-based plate (LED-MGVC) devices, this study finds that, given 6 W of input power, the heat source temperature of the LED-MGVC can be kept below 65 °C with a maximum illumination greater than 3200 lux and a maximum output power of 160 mW or more. The above conclusions indicate the selection of the LED heat dissipation substrate plays a vital role in the chip's power generation performance. The type 2 cooling modules has better energy storage characteristics than The type 1 module, thus making it possible to reduce the temperatures of more LED dies, thus allowing for increased illumination and life span.