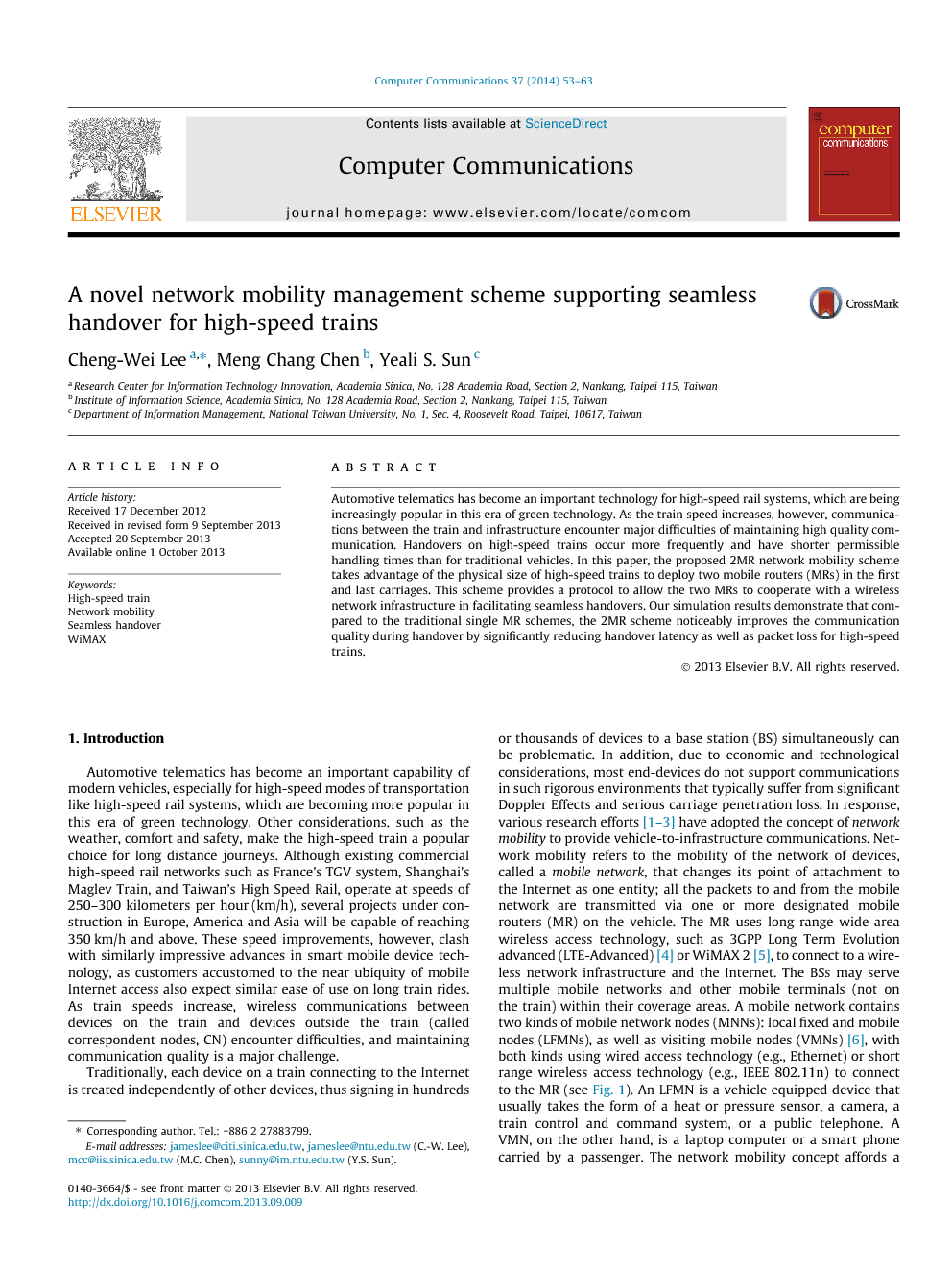 Automotive telematics has become an important technology for high-speed rail systems, which are being increasingly popular in this era of green technology. As the train speed increases, however, communications between the train and infrastructure encounter major difficulties of maintaining high quality communication. Handovers on high-speed trains occur more frequently and have shorter permissible handling times than for traditional vehicles. In this paper, the proposed 2MR network mobility scheme takes advantage of the physical size of high-speed trains to deploy two mobile routers (MRs) in the first and last carriages. This scheme provides a protocol to allow the two MRs to cooperate with a wireless network infrastructure in facilitating seamless handovers. Our simulation results demonstrate that compared to the traditional single MR schemes, the 2MR scheme noticeably improves the communication quality during handover by significantly reducing handover latency as well as packet loss for high-speed trains.

Automotive telematics has become an important capability of modern vehicles, especially for high-speed modes of transportation like high-speed rail systems, which are becoming more popular in this era of green technology. Other considerations, such as the weather, comfort and safety, make the high-speed train a popular choice for long distance journeys. Although existing commercial high-speed rail networks such as France’s TGV system, Shanghai’s Maglev Train, and Taiwan’s High Speed Rail, operate at speeds of 250–300 kilometers per hour (km/h), several projects under construction in Europe, America and Asia will be capable of reaching 350 km/h and above. These speed improvements, however, clash with similarly impressive advances in smart mobile device technology, as customers accustomed to the near ubiquity of mobile Internet access also expect similar ease of use on long train rides. As train speeds increase, wireless communications between devices on the train and devices outside the train (called correspondent nodes, CN) encounter difficulties, and maintaining communication quality is a major challenge. Traditionally, each device on a train connecting to the Internet is treated independently of other devices, thus signing in hundreds or thousands of devices to a base station (BS) simultaneously can be problematic. In addition, due to economic and technological considerations, most end-devices do not support communications in such rigorous environments that typically suffer from significant Doppler Effects and serious carriage penetration loss. In response, various research efforts [1], [2] and [3] have adopted the concept of network mobility to provide vehicle-to-infrastructure communications. Network mobility refers to the mobility of the network of devices, called a mobile network, that changes its point of attachment to the Internet as one entity; all the packets to and from the mobile network are transmitted via one or more designated mobile routers (MR) on the vehicle. The MR uses long-range wide-area wireless access technology, such as 3GPP Long Term Evolution advanced (LTE-Advanced) [4] or WiMAX 2 [5], to connect to a wireless network infrastructure and the Internet. The BSs may serve multiple mobile networks and other mobile terminals (not on the train) within their coverage areas. A mobile network contains two kinds of mobile network nodes (MNNs): local fixed and mobile nodes (LFMNs), as well as visiting mobile nodes (VMNs) [6], with both kinds using wired access technology (e.g., Ethernet) or short range wireless access technology (e.g., IEEE 802.11n) to connect to the MR (see Fig. 1). An LFMN is a vehicle equipped device that usually takes the form of a heat or pressure sensor, a camera, a train control and command system, or a public telephone. A VMN, on the other hand, is a laptop computer or a smart phone carried by a passenger. The network mobility concept affords a number of advantages in that it reduces the hardware and software system complexity and power consumption of MNNs, as well as the monetary cost involved in Internet access. Meanwhile, from the perspective of the network operator, it can reduce the processing and signaling overheads of Authentication, Authorization and Accounting (AAA) and network resource management. Low quality train-to-infrastructure wireless links are not the only challenge to overcome in providing Internet access to MNNs on a high-speed train; the high speed of the train also results in frequent handover events, within and across subnets. Further, since the handover procedure is executed in the overlap area of adjacent BSs, the permissible handover time decreases as the train’s speed increases. Efficient mobility management and handover protocols across BSs are thus required to ensure the continuity of real-time communication sessions (e.g., VoIP and video conference). In this paper, we take advantage of the long physical size of high-speed trains and propose the 2MR scheme. Unlike previous multiple-MR systems in which each router utilizes different access technologies [7], the proposed 2MR scheme deploys two equivalent MRs to share the communication loads and handle handovers cooperatively. The proposed network mobility management is designed on the IPv6 network so that the handover protocols provide seamless handover for the MNNs on the train. Although the WiMAX terminology and technology are used for exemplifying the design ideas and advantages, the design could be applied to other wide-area wireless access technologies, such as LTE-Advanced, with the appropriate modifications. The remainder of this paper is organized as follows. Section 2 reviews the related work and background. Section 3 describes the architecture of the proposed 2MR scheme, and section 4 introduces the 2MR handover protocols. We detail the simulation results in Section 5. Then, in Section 6, we summarize our conclusions. Table 1 lists the abbreviations used in this paper to help the readers to follow the details of the paper.

Improvements in train speeds are clashing against similarly impressive achievements in smart mobile device technologies. Customers are increasingly desiring and expecting uninterrupted mobile Internet access, even on long train rides. However, providing broadband wireless communication to high-speed trains relies on the precision of BS planning, which demands high monetary and manpower costs. The proposed 2MR network mobility scheme takes advantage of the physical size of high-speed trains to deploy two mobile routers (MRs) and offers a protocol to allow the two MRs to cooperate with wireless network infrastructure in providing a seamless handover. The 2MR scheme effectively alleviates the problem of improper BS-planning, and is easy to deploy. By deploying two MRs at the first and last carriage, and designing new messages and functionalities in the PMIPv6-based infrastructure, the handover latency as well as packet loss is reduced while adding negligible extra data transmission delay.