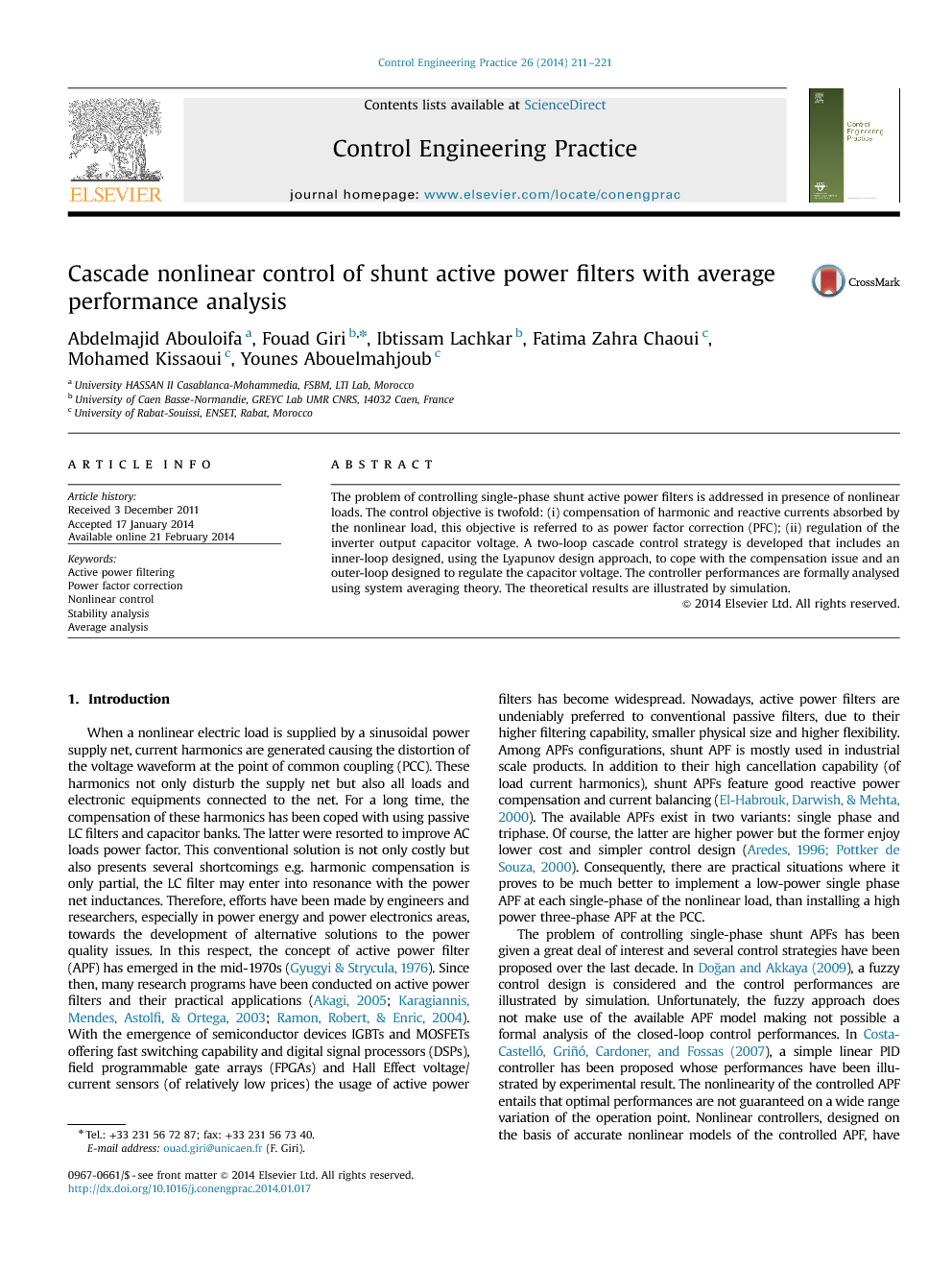 The problem of controlling single-phase shunt active power filters is addressed in presence of nonlinear loads. The control objective is twofold: (i) compensation of harmonic and reactive currents absorbed by the nonlinear load, this objective is referred to as power factor correction (PFC); (ii) regulation of the inverter output capacitor voltage. A two-loop cascade control strategy is developed that includes an inner-loop designed, using the Lyapunov design approach, to cope with the compensation issue and an outer-loop designed to regulate the capacitor voltage. The controller performances are formally analysed using system averaging theory. The theoretical results are illustrated by simulation.

When a nonlinear electric load is supplied by a sinusoidal power supply net, current harmonics are generated causing the distortion of the voltage waveform at the point of common coupling (PCC). These harmonics not only disturb the supply net but also all loads and electronic equipments connected to the net. For a long time, the compensation of these harmonics has been coped with using passive LC filters and capacitor banks. The latter were resorted to improve AC loads power factor. This conventional solution is not only costly but also presents several shortcomings e.g. harmonic compensation is only partial, the LC filter may enter into resonance with the power net inductances. Therefore, efforts have been made by engineers and researchers, especially in power energy and power electronics areas, towards the development of alternative solutions to the power quality issues. In this respect, the concept of active power filter (APF) has emerged in the mid-1970s (Gyugyi & Strycula, 1976). Since then, many research programs have been conducted on active power filters and their practical applications (Akagi, 2005; Karagiannis, Mendes, Astolfi, & Ortega, 2003; Ramon, Robert, & Enric, 2004). With the emergence of semiconductor devices IGBTs and MOSFETs offering fast switching capability and digital signal processors (DSPs), field programmable gate arrays (FPGAs) and Hall Effect voltage/current sensors (of relatively low prices) the usage of active power filters has become widespread. Nowadays, active power filters are undeniably preferred to conventional passive filters, due to their higher filtering capability, smaller physical size and higher flexibility. Among APFs configurations, shunt APF is mostly used in industrial scale products. In addition to their high cancellation capability (of load current harmonics), shunt APFs feature good reactive power compensation and current balancing (El-Habrouk, Darwish, & Mehta, 2000). The available APFs exist in two variants: single phase and triphase. Of course, the latter are higher power but the former enjoy lower cost and simpler control design (Aredes, 1996 and Pottker de Souza, 2000). Consequently, there are practical situations where it proves to be much better to implement a low-power single phase APF at each single-phase of the nonlinear load, than installing a high power three-phase APF at the PCC. The problem of controlling single-phase shunt APFs has been given a great deal of interest and several control strategies have been proposed over the last decade. In Doğan and Akkaya (2009), a fuzzy control design is considered and the control performances are illustrated by simulation. Unfortunately, the fuzzy approach does not make use of the available APF model making not possible a formal analysis of the closed-loop control performances. In Costa-Castelló, Griñó, Cardoner, and Fossas (2007), a simple linear PID controller has been proposed whose performances have been illustrated by experimental result. The nonlinearity of the controlled APF entails that optimal performances are not guaranteed on a wide range variation of the operation point. Nonlinear controllers, designed on the basis of accurate nonlinear models of the controlled APF, have been proposed in Matas, de Vicuna, Miret, Guerrero, and Castilla (2008), Komurcugil (2006) and Hernandez (1998). The control design techniques used there include feedback linearization (Matas et al., 2008), sliding mode (Hernandez, 1998), and Lyapunov design (Komurcugil, 2006). These control solutions present at least two major drawbacks. First, all proposed controllers are mono-loop and designed to meet harmonic rejection. The output voltage regulation purpose is indirectly achieved by just letting the closed-loop system static gain equal unity. Accordingly, perfect asymptotic tracking is only guaranteed in presence of constant voltage reference and fixed loads. Second, no theoretical analysis is made to formally prove that the closed-loop control performances are actually achieved. In this paper, the focus is made on single-phase shunt APFs in presence of nonlinear loads. A new control strategy is developed that overcome the above described shortcomings. Specifically, a nonlinear cascade controller is designed in order to simultaneously meet both control objectives: (i) satisfactory compensation of harmonic and reactive currents absorbed by the nonlinear load and (ii) tight regulation of the inverter output capacitor voltage. The controller inner-loop is designed using the Lyapunov design technique to cope with the compensation issue. The outer-loop involves a nonlinear PI regulator that regulates the output capacitor voltage despite load changes. It is formally shown using tools from the Lyapunov stability and averaging theory that, all control objectives are actually achieved in the mean. This theoretical result is confirmed by several numerical simulations. The paper is organized as follows: the control problem formulation, including the APF modeling, is described in Section 2; the cascade nonlinear controller design is dealt with in Section 3 and its performances are formally analyzed in Section 4; the theoretical analysis results are confirmed by simulation in Section 4.

A nonlinear control strategy is proposed for single-phase shunt active power filters. The aim is to achieve current harmonics and reactive power compensation, in presence of nonlinear and uncertain loads, as well as tight voltage regulation at the inverter output capacitor. To this end, a cascade nonlinear controller is developed and analyzed making use of advanced tools from the control theory e.g. backstepping control design, system averaging theory. It is formally established that the control objectives are actually achieved in average with a quite satisfactory accuracy. The formal results are confirmed by several simulations that also show the controller robustness against load change and uncertainty.