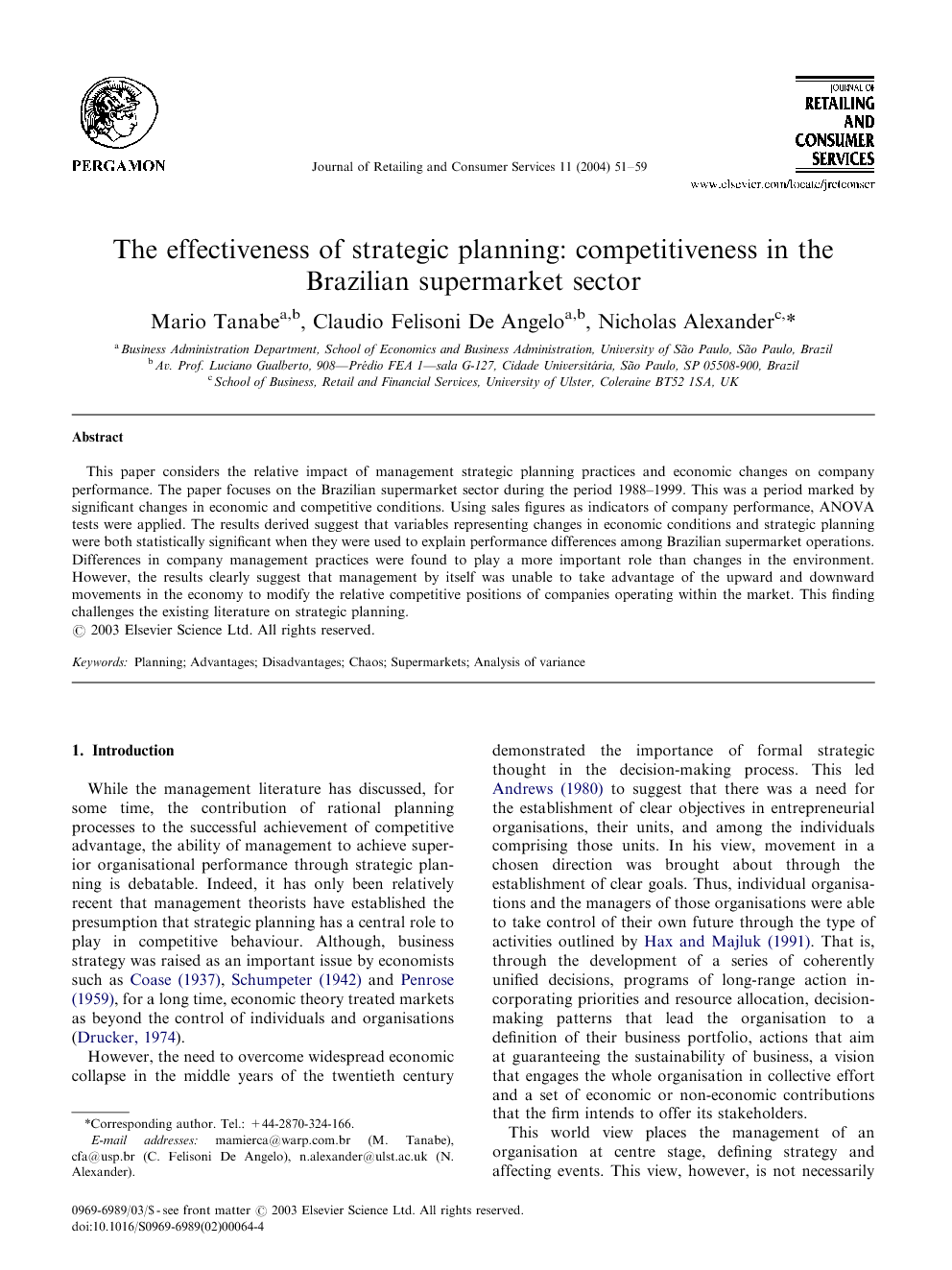 This paper considers the relative impact of management strategic planning practices and economic changes on company performance. The paper focuses on the Brazilian supermarket sector during the period 1988–1999. This was a period marked by significant changes in economic and competitive conditions. Using sales figures as indicators of company performance, ANOVA tests were applied. The results derived suggest that variables representing changes in economic conditions and strategic planning were both statistically significant when they were used to explain performance differences among Brazilian supermarket operations. Differences in company management practices were found to play a more important role than changes in the environment. However, the results clearly suggest that management by itself was unable to take advantage of the upward and downward movements in the economy to modify the relative competitive positions of companies operating within the market. This finding challenges the existing literature on strategic planning.

The results obtained make it possible to suggest that economic changes affect the performance of the firms, especially in terms of sales per area and sales per employee. The correlation between variations in GDP and the performance of the firms in the sample is low, but, as expected, positive. On the other hand, the values found confirm the presumption that there are significant differences of performance among the firms. From the results obtained, the portion of total variance attributable to the characteristics and actions of the firms is greater than that attributable to economic changes. However, the importance of the management role within the firm as an indicator of performance must be qualified. It would appear that the strategic actions of the firms succeed at most in maintaining the status quo. The stability of company positions relative to each other, suggest that there is no proof that management can alter the competitive scenario within the market. It should be noted that the maintenance of the relative positions was observed on a very broad horizon (12 years) that witnessed substantial changes in the macroeconomic conditions. Therefore, it may be reasonable to suggest that the process of strategy formulation and the actions stemming from that process are not entirely, or even primarily, rational. Perhaps it might be better to see the strategy of a firm as merely reflecting the assumptions and attitudes of the senior members of the management team. If this interpretation is correct, it is very difficult to imagine that mature and experienced managers will change their way of thinking because some economic calculation indicates that they should alter their firm's strategy. In other words, it may not matter how rational a strategic change may seem, firms have difficulty in adopting a new strategy, because this would involve a fundamental change of behaviour and attitudes within the senior management group. This would suggest that it is only in a period of management change that firms manage to make significant changes in strategic direction. It would appear, in normal periods, firms tend to repeat behavioural patterns learned in the past without reference to accepted business models. By inference, strategic actions are not very effective or have no practical impact. Beating the competition seems to be more a figure of speech than a realised activity. If this is the case, considerable caution is required when evaluating managers’ use of business tools. These results would therefore suggest that, in general, management within the structures considered here did not proactively affect the competitive outcomes by taking advantage of the threats and opportunities required to achieve superior qualitative and quantitative performances. These results do not support the views of authors such as Ansoff et al. (1976), Andrews (1980) and Porter (1980). Instead, the results suggest there is not a meaningful relationship between management planning and competitive outcomes. In this, the results support the Chaos Theory perspective of Baumol and Benhabib (1999) and Thiétart and Forgues (1993). In the field of Physics, the Brazilian physicist Lattes (2000) is sceptical of analytical models. “I have no theory, I am empirical. Theory is always temporary. I have intuition” (Lattes, 2000, p. 4). His attitude appears to be shared by the firms studied here and may go some way to explaining the apparent inability of firms to redefine the competitive scenario and their inability to attain the outcomes proposed in the strategic planning literature.