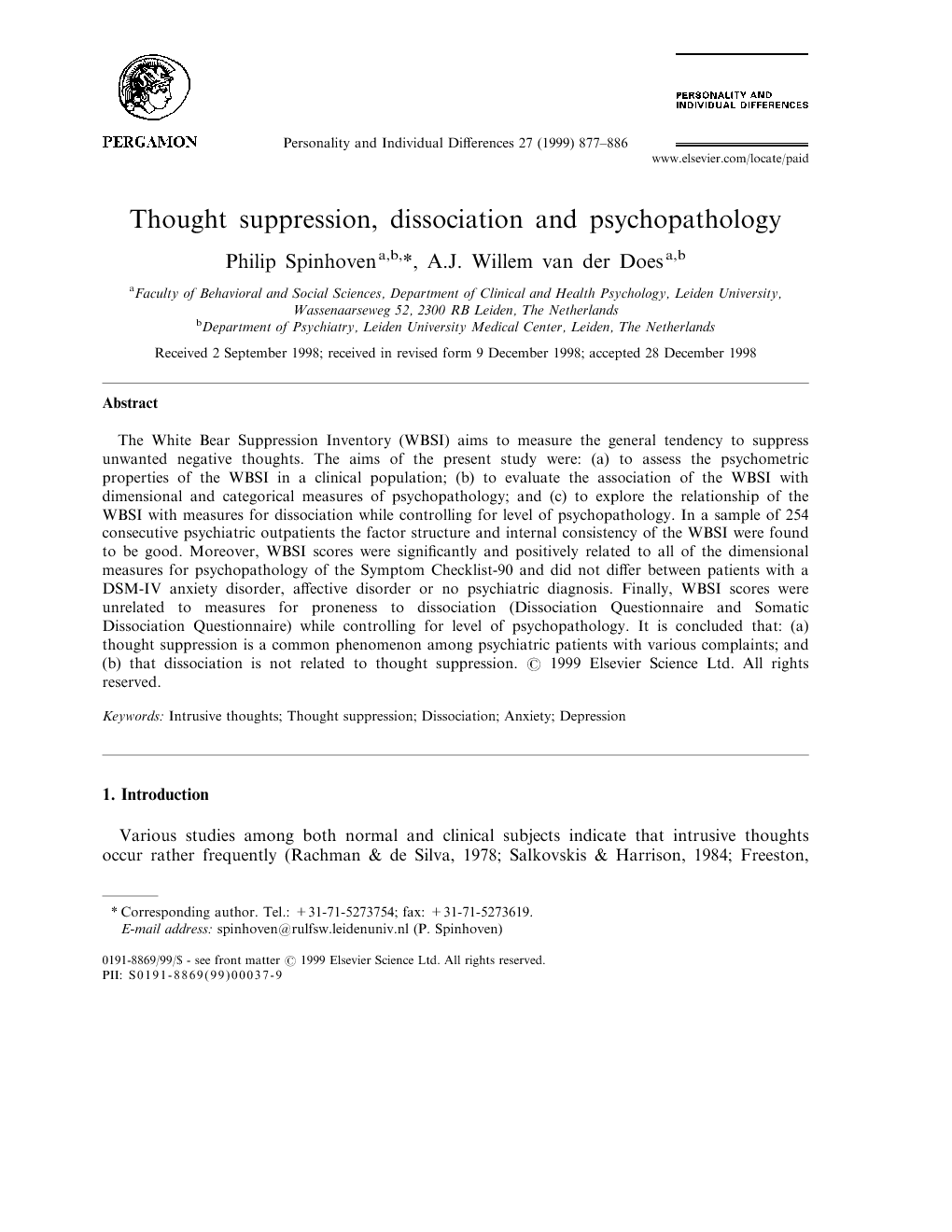 The White Bear Suppression Inventory (WBSI) aims to measure the general tendency to suppress unwanted negative thoughts. The aims of the present study were: (a) to assess the psychometric properties of the WBSI in a clinical population; (b) to evaluate the association of the WBSI with dimensional and categorical measures of psychopathology; and (c) to explore the relationship of the WBSI with measures for dissociation while controlling for level of psychopathology. In a sample of 254 consecutive psychiatric outpatients the factor structure and internal consistency of the WBSI were found to be good. Moreover, WBSI scores were significantly and positively related to all of the dimensional measures for psychopathology of the Symptom Checklist-90 and did not differ between patients with a DSM-IV anxiety disorder, affective disorder or no psychiatric diagnosis. Finally, WBSI scores were unrelated to measures for proneness to dissociation (Dissociation Questionnaire and Somatic Dissociation Questionnaire) while controlling for level of psychopathology. It is concluded that: (a) thought suppression is a common phenomenon among psychiatric patients with various complaints; and (b) that dissociation is not related to thought suppression.

Various studies among both normal and clinical subjects indicate that intrusive thoughts occur rather frequently Rachman & de Silva, 1978, Salkovskis & Harrison, 1984, Freeston, Ladouceur, Thibodeau, & Gagnon, 1991 and Purdon & Clard, 1993. A common response to these unwanted intrusive thoughts is trying to suppress them. Thought suppression refers to the process of consciously trying to prevent certain thoughts from entering the stream of consciousness (Wegner, 1989). However, thought suppression may have the paradoxical effect of making these thoughts more intrusive Wegner, Schneider, Carter, & White, 1987 and Wegner & Erber, 1992. These paradoxical effects of thought suppression have been observed in various analogue (e.g. Clark, Ball, & Pape, 1991, Muris & Merckelbach, 1991 and Clark, Winton, & Thynn, 1993) as well as clinical studies (e.g. Muris, Merckelbach, Horselenberg, Sijsenaar, & Leeuw, 1997, Becker, Rinck, Roth, & Margraf, 1998 and Harvey & Bryant, 1998). However, some studies have failed to validate these effects (e.g. Merckelbach, Muris, van den Hout, & de Jong, 1991, Muris, Merckelbach, van den Hout, & de Jong, 1992, Kelly & Kahn, 1994 and Mathews & Milroy, 1994). Thought suppression may be relevant in the etiology of emotional disorders. Especially with regard to obsessions, it has been argued that consciously trying to suppress unwanted thoughts will have the counterproductive effect of more frequent and negative thoughts resulting in a positive feedback loop of more intense obsessions and consequent thought suppression Wegner, 1989 and Salkovskis, 1989. Moreover, it has been observed that traumatized persons try to suppress thoughts about their aversive experiences (Kuyken & Brewin, 1994) and that thought suppression in traumatized persons is a risk factor for the development of post-traumatic stress disorder (McFarlane, 1988). Recently Wegner and Zanakos (1994) proposed that there may be stable individual differences in the tendency to suppress thoughts across a variety of situations and thought topics. In order to measure this general tendency these authors developed the White Bear Suppression Inventory (WBSI) (Wegner & Zanakos, 1994). The WBSI asks subjects to indicate on a 5-point Likert-type scale the extent to which they agree with statements such as `There are things I prefer not to think about'. Psychometric studies in college students have shown that the WBSI measures one factor and that it is a reliable instrument in terms of internal consistency and test–retest stability (Wegner & Zanakos, 1994; Muris, Merckelbach & Horselenberg, 1996). Moreover, WBSI scores correlated positively with measures of emotional vulnerability and measures of obsessional thinking and depressive and anxious affect Wegner & Zanakos, 1994 and Muris et al., 1996. In addition, the WBSI predicted signs of clinical obsession among subjects prone toward obsessional thinking and depression among individuals motivated to dislike negative thoughts (Wegner & Zanakos, 1994). Finally, WBSI scores were positively related to frequencies of intrusive thinking in thought suppression experiments (Muris et al., 1996). Besides the paradoxical effect of more frequent and negative thoughts, thought suppression may also have a less paradoxical, memory-undermining effect. Participants who suppressed thoughts about a filmed story were less able to retrieve the order of events, although their retrieval of the events themselves was not generally impaired (Wegner, Quillian, & Houston, 1996). However, this undermining effect of suppression on memory for chronology could not be replicated in a recent study on episodic memory by Rassin, Merckelbach, & Muris (1997). In concordance with the hypothesis of a memory-undermining effect of suppression, in a study among college students a moderately strong and positive correlation has been found between thought suppression (as measured by the WBSI) and dissociation (as measured by the Dissociation Experience Scale (DES) (Bernstein & Putnam, 1986)) irrespective of reported trauma (Van den Hout, Merckelbach & Pool, 1996). Recently, this association between WBSI and DES scores was replicated in another sample of college students (Muris & Merckelbach, 1997). On the basis of their results Van den Hout et al. (1996) suggest that dissociative amnesia may result from willful efforts to forget rather than from aberrations in automatic processing. However, this conclusion may be premature. Both suppression and dissociation may be the result of a third underlying variable such as a high level of neurotic symptoms or negative life experiences (Muris & Merckelbach, 1997). It is known that level of psychopathology is positively associated with both thought suppression Wegner & Zanakos, 1994 and Muris et al., 1996 and dissociation (Van Ijzendoorn & Schuengel, 1996). Consequently, the positive relationship of thought suppression with dissociation may be spurious and dependent on the level of psychopathology. In other words: subjects with higher levels of psychopathology may be prone to dissociation (including amnesia) and may also experience high levels of intrusive thoughts which they attempt to suppress. In summary, the aims of the present study were two-fold: (a) to examine the psychometric properties of the WBSI (factor structure, internal consistency and relationship with age and gender) in a clinical population; (b) to evaluate the association of the WBSI with dimensional and categorical measures of psychopathology (in particular anxiety and depression); and (c) to explore the relationship of the WBSI with proneness to dissociation while controlling for level of psychopathology.