عنوان انگلیسی
Intrusive thoughts and their relationship to actigraphic measurement of sleep: towards a cognitive model of insomnia
دانلود فوری مقاله + سفارش ترجمه 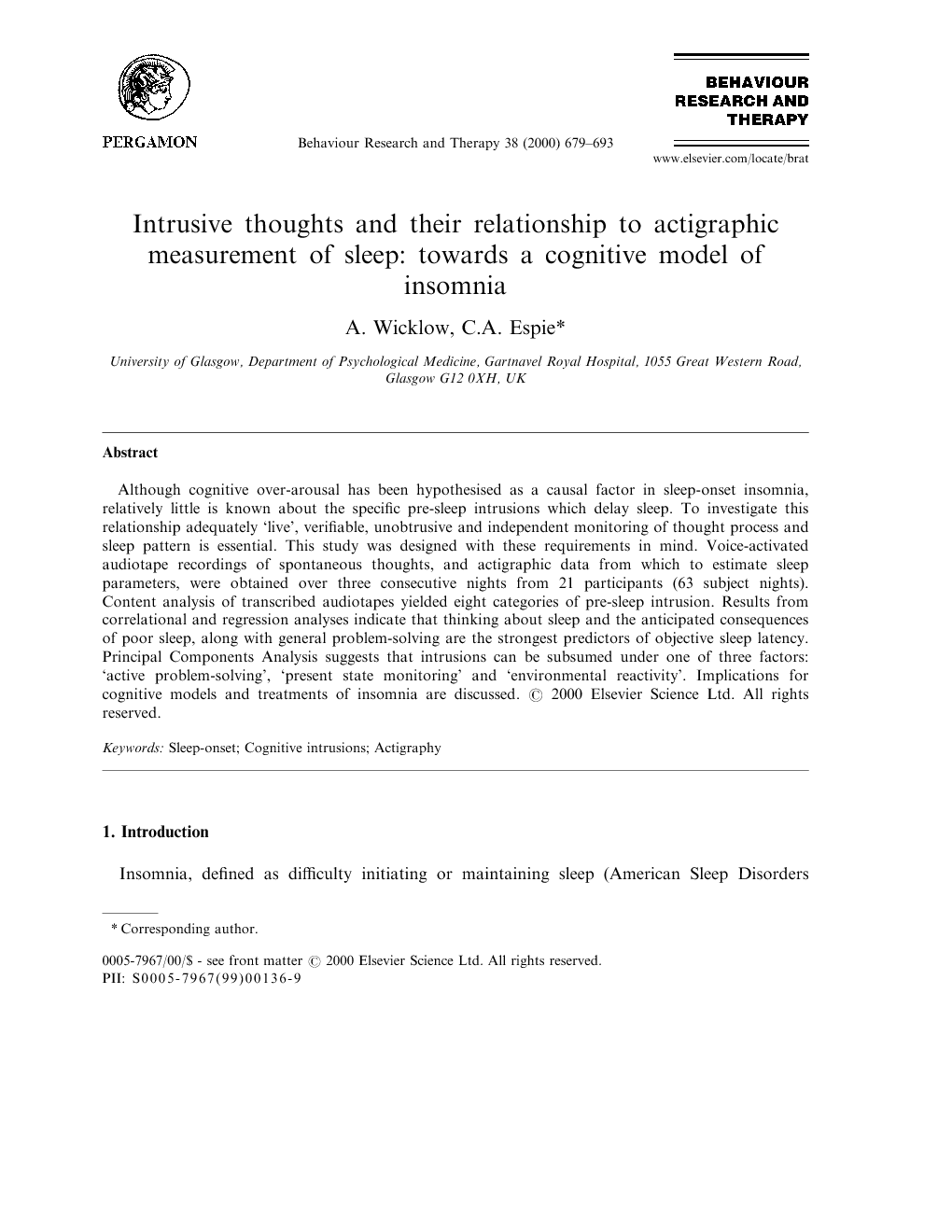 Although cognitive over-arousal has been hypothesised as a causal factor in sleep-onset insomnia, relatively little is known about the specific pre-sleep intrusions which delay sleep. To investigate this relationship adequately ‘live’, verifiable, unobtrusive and independent monitoring of thought process and sleep pattern is essential. This study was designed with these requirements in mind. Voice-activated audiotape recordings of spontaneous thoughts, and actigraphic data from which to estimate sleep parameters, were obtained over three consecutive nights from 21 participants (63 subject nights). Content analysis of transcribed audiotapes yielded eight categories of pre-sleep intrusion. Results from correlational and regression analyses indicate that thinking about sleep and the anticipated consequences of poor sleep, along with general problem-solving are the strongest predictors of objective sleep latency. Principal Components Analysis suggests that intrusions can be subsumed under one of three factors: ‘active problem-solving’, ‘present state monitoring’ and ‘environmental reactivity’. Implications for cognitive models and treatments of insomnia are discussed.

Insomnia, defined as difficulty initiating or maintaining sleep (American Sleep Disorders Association, 1997), presents in 30% of the adult and older population occasionally, and in 10–15% on a chronic basis (Foley et al., 1995, Gallup, 1991 and Oyahon et al., 1997). Clearly, insomnia is a severe and widespread complaint. However, its origins are only partially understood. 1.1. Cognitive arousal and insomnia Investigation of the relative influence of cognitive and physiological arousal, consistently associates the former more strongly with sleep disruption, and ‘having an overactive mind’ has been the attribution of poor sleep rated most highly, both by insomniacs and non-insomniacs (Broman and Hetta, 1994, Espie et al., 1989, Evans, 1977 and Lichstein and Rosenthal, 1980; Nicassio, Mendlowitz, Fussel & Petras, 1985). However, there have been conflicting conclusions from studies investigating the relationship between pre-sleep cognitive activity and different measures of sleep latency. Van Egeren, Haynes, Franzen & Hamilton (1983) found that cognitions were significantly correlated with subjective sleep latency, but not with electroencephalographic (EEG) sleep; whereas Borkovec et al., 1979 and Kuisk et al., 1989 reported more frequent cognitive activity in objective insomniacs (i.e. sleep disturbance confirmed by EEG data) than in subjective insomniacs. Sanavio (1988) reported a very low product–moment correlation (r=0.09) between pre-sleep intrusion and self-reported sleep latency, and furthermore, found no specific advantage of a tailored cognitively focused program in the treatment of sleep-onset insomnia. The possibility, therefore, remains that cognitive arousal is simply an epiphenomenon of night-time wakefulness ( Freedman and Sattler, 1982 and Morin, 1993). Support for a cognitive model has also come from studies where significant sleep difficulties have been induced through the experimental manipulation of cognitive intrusions in the pre-sleep period (e.g. Gross and Borkovec, 1982; Hall et al., 1996). However, Haynes, Adams and Franzen (1981) exposed insomniacs and non-insomniacs to brief cognitive stressors and found a decrease in subjective and objective sleep-onset latency among insomniacs on stress nights. They concluded that a mental processing task which disrupts sleep-related cognitive events may, as a result, decrease sleep-onset latency, implying that the nature of the intrusive cognitions may be a critical factor in the final effect upon sleep. It seems possible, therefore, that failure to differentiate thought content could result in limited comparability betwen studies.