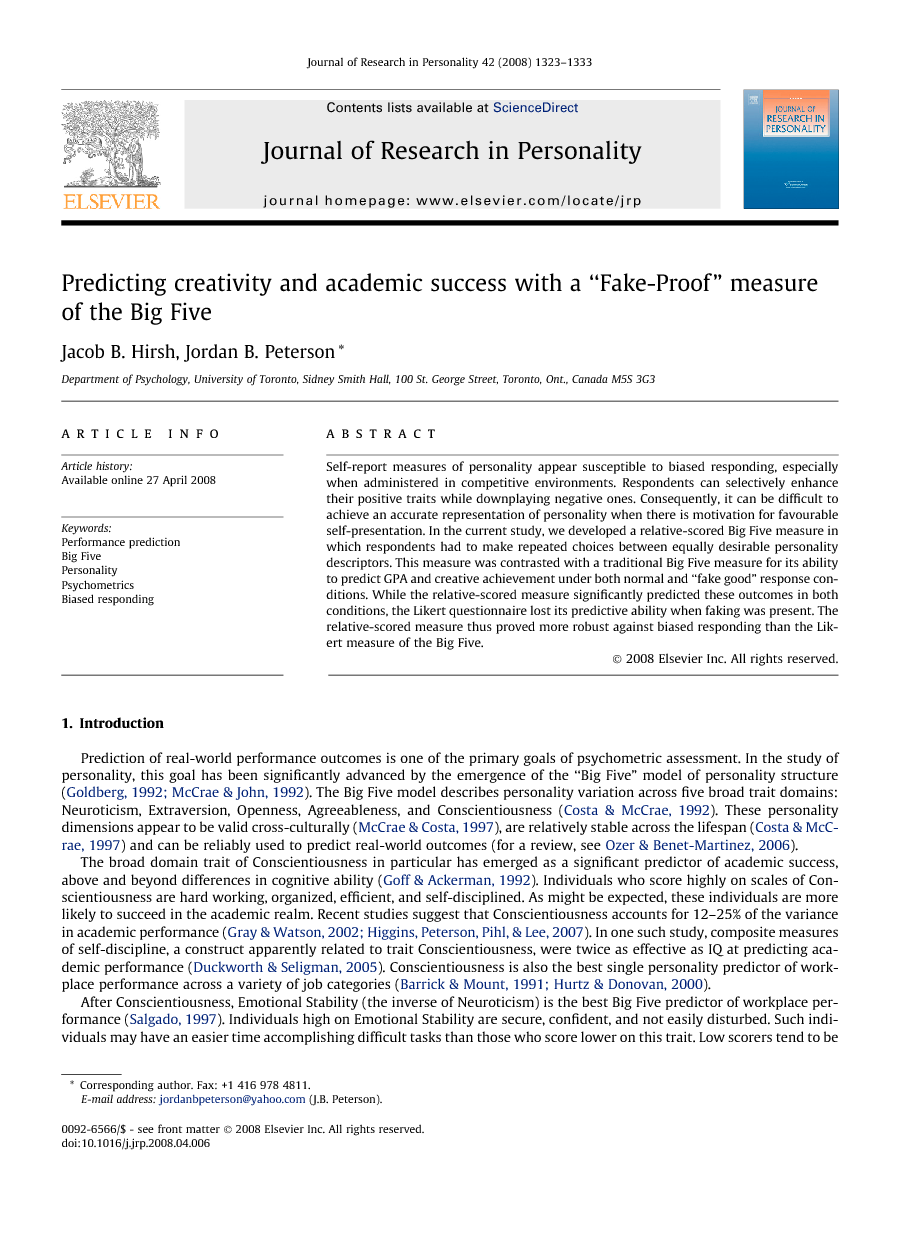 Self-report measures of personality appear susceptible to biased responding, especially when administered in competitive environments. Respondents can selectively enhance their positive traits while downplaying negative ones. Consequently, it can be difficult to achieve an accurate representation of personality when there is motivation for favourable self-presentation. In the current study, we developed a relative-scored Big Five measure in which respondents had to make repeated choices between equally desirable personality descriptors. This measure was contrasted with a traditional Big Five measure for its ability to predict GPA and creative achievement under both normal and “fake good” response conditions. While the relative-scored measure significantly predicted these outcomes in both conditions, the Likert questionnaire lost its predictive ability when faking was present. The relative-scored measure thus proved more robust against biased responding than the Likert measure of the Big Five.

Prediction of real-world performance outcomes is one of the primary goals of psychometric assessment. In the study of personality, this goal has been significantly advanced by the emergence of the “Big Five” model of personality structure (Goldberg, 1992 and McCrae and John, 1992). The Big Five model describes personality variation across five broad trait domains: Neuroticism, Extraversion, Openness, Agreeableness, and Conscientiousness (Costa & McCrae, 1992). These personality dimensions appear to be valid cross-culturally (McCrae & Costa, 1997), are relatively stable across the lifespan (Costa & McCrae, 1997) and can be reliably used to predict real-world outcomes (for a review, see Ozer & Benet-Martinez, 2006). The broad domain trait of Conscientiousness in particular has emerged as a significant predictor of academic success, above and beyond differences in cognitive ability (Goff & Ackerman, 1992). Individuals who score highly on scales of Conscientiousness are hard working, organized, efficient, and self-disciplined. As might be expected, these individuals are more likely to succeed in the academic realm. Recent studies suggest that Conscientiousness accounts for 12–25% of the variance in academic performance (Gray and Watson, 2002 and Higgins et al., 2007). In one such study, composite measures of self-discipline, a construct apparently related to trait Conscientiousness, were twice as effective as IQ at predicting academic performance (Duckworth & Seligman, 2005). Conscientiousness is also the best single personality predictor of workplace performance across a variety of job categories (Barrick and Mount, 1991 and Hurtz and Donovan, 2000). After Conscientiousness, Emotional Stability (the inverse of Neuroticism) is the best Big Five predictor of workplace performance (Salgado, 1997). Individuals high on Emotional Stability are secure, confident, and not easily disturbed. Such individuals may have an easier time accomplishing difficult tasks than those who score lower on this trait. Low scorers tend to be anxious, depressed, and worrisome, which makes them more susceptible to emotional exhaustion. Emotional Stability is also a good predictor of job satisfaction and organizational commitment (Thoresen, Kaplan, Barsky, Warren, & de Chermont, 2003). Extraverts, who are assertive, enthusiastic, and sociable, are good candidates for team-based activities (Barrick, Mount, & Judge, 2001). Their high levels of positive affect and enthusiasm also help make Extraverts effective performers in leadership positions (Judge, Bono, Ilies, & Gerhardt, 2002) and accounts for their comparatively high levels of job satisfaction and sense of personal accomplishment (Thoresen et al., 2003). Trait Agreeableness, like Extraversion, is also a good predictor of team-based work performance (Barrick et al., 2001). Highly agreeable individuals are warm, considerate, trusting, and empathic, in contrast to their tough-minded, selfish, and hostile counterparts, at the low end of the spectrum. When combined with Extraversion, high Agreeableness also predicts a transformational leadership style, which is associated with increased commitment, satisfaction, and motivation among group members (Judge & Bono, 2000). Openness to Experience, finally, has been linked to higher levels of creative achievement (Carson, Peterson, & Higgins, 2005). Open people are curious, imaginative, and willing to entertain new ideas. People who score highly on this dimension have a greater tendency towards cognitive exploration and also manifest higher levels of cognitive flexibility and divergent thinking (DeYoung et al., 2005 and McCrae, 1987). Neuropsychological investigations suggest that individual differences in Openness are related to dopaminergic function in the prefrontal cortex (DeYoung et al., 2005). The increased cognitive flexibility afforded by dopaminergic activity is thought to underlie the generation of novel associations central to the creative process (Eysenck, 1995). Scores on personality questionnaires measuring Openness thus appear to be significant predictors of an individual’s creative capacity. Despite the frequently reported predictive utility of questionnaires assessing these Big Five traits, their implementation in real-world selection processes can be hindered, at least in some circumstances, by the presence of biased responding. When individuals are asked to rate themselves on a series of personality dimensions, they sometimes exaggerate their positive and downplay their negative qualities (Paulhus, 2002). This tendency presents a potentially serious problem in the domain of performance prediction, because respondents may be highly motivated to make a good impression. A large literature now shows that motivated individuals are able to fake their scores on a five factor personality scale when attempting to do so (e.g., Furnham, 1997 and Viswesvaran and Ones, 1999).