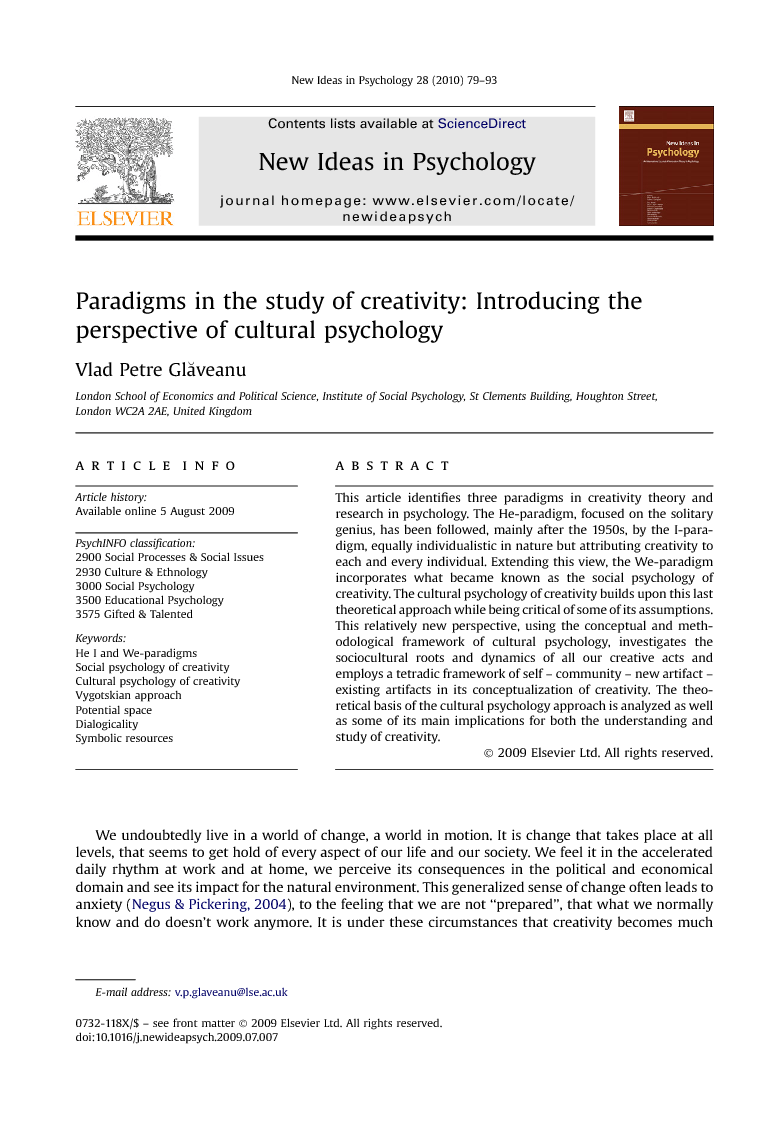 This article identifies three paradigms in creativity theory and research in psychology. The He-paradigm, focused on the solitary genius, has been followed, mainly after the 1950s, by the I-paradigm, equally individualistic in nature but attributing creativity to each and every individual. Extending this view, the We-paradigm incorporates what became known as the social psychology of creativity. The cultural psychology of creativity builds upon this last theoretical approach while being critical of some of its assumptions. This relatively new perspective, using the conceptual and methodological framework of cultural psychology, investigates the sociocultural roots and dynamics of all our creative acts and employs a tetradic framework of self – community – new artifact – existing artifacts in its conceptualization of creativity. The theoretical basis of the cultural psychology approach is analyzed as well as some of its main implications for both the understanding and study of creativity.

We undoubtedly live in a world of change, a world in motion. It is change that takes place at all levels, that seems to get hold of every aspect of our life and our society. We feel it in the accelerated daily rhythm at work and at home, we perceive its consequences in the political and economical domain and see its impact for the natural environment. This generalized sense of change often leads to anxiety (Negus & Pickering, 2004), to the feeling that we are not “prepared”, that what we normally know and do doesn't work anymore. It is under these circumstances that creativity becomes much more present and more important that before (Runco, 2004) and it is claimed to help us achieve our goals as individuals, as organizations, as societies (Westwood & Low, 2003). At the same time, the aura of panacea creativity has gained pushes it more than ever under the scrutiny of psychologists and social scientists at large. The number of ways in which creativity has been theorized and the variety of domains it has been applied to is impressive (for reviews see Runco, 2004 and Sternberg, 2003): from behavioral approaches linking it to reinforcement and modeling ( Epstein & Laptosky, 1999) to the dominant cognitive approaches discussing it in terms of cognitive style ( Martinsen & Kaufmann, 1999) or problem solving ( Weisberg, 1988). Primary areas of application for creativity theories are in educational settings ( Cropley, 1999 and Hennessey, 2003a) and organizations, especially studies of leadership ( Mumford & Connelly, 1999) and performance in heterogeneous teams ( Puccio, 1999). In most of these areas it is the individual set apart from his/her social context that constitutes the unit of analysis for creativity, an authentic bias in the literature recognized only from the ‘70s on (Hennessey, 2003b). Be it the “lone genius” or the more “ordinary” person, s/he creates outside of social and group factors ( Paulus & Nijstad, 2003) and even despite them ( Weiner, 2000). Society and culture repeatedly act as the “villains” the creator fights against and this generates a series of paradoxes that will be exposed further on in this article. One of them relates directly to the definition of creativity. “New” and “useful” as features of a creative product ( Martindale, 1994, Richards, 1999 and Stein, 1953) are properties that easily describe the work of great creators and can be applied to certain products, particularly in the field of science, art and technology, but deny the creativity of children and the varied instances of “mundane creativity” ( Cohen & Ambrose, 1999). This article aims to unpack the social and cultural nature of creative acts. In doing so I will start by distinguishing between three paradigms that led creativity theory and research, the He, I and We-paradigm (see also Glăveanu, in press). The first part will therefore focus on paradigmatic shifts from “positivistic research paradigms to more complex, constructivistic, systems-oriented research models” ( Friedman & Rogers, 1998, p. xviii). Nonetheless, it will be argued that even the models proposed within what is currently considered the social psychology of creativity, maybe “the least developed area in creativity research” ( Amabile, 1996, p. 264), can still be criticized for the individualism hidden behind their assumptions. Counteracting such tendencies, an emerging multidisciplinary field is introduced, the cultural psychology of creativity, conceiving creativity as a fundamentally relational, intersubjective phenomenon. 1. Three paradigms of creativity theory and research The study of creativity has known three paradigmatic stages: the genius stage, the creative person stage and the “social” stage. By making reference to historical times long before the words “creativeness” or “creativity” entered our vocabulary (for the English language this is the 18th and 19th century respectively; see Mason, 2003 and Weiner, 2000) or before psychology became a science, the article will also consider centuries of pre-psychological thought concerning humans' capacity to create. Although a historical progression is implied, it is likely that “instances” of these paradigms coexist at different times and they are certainly intertwined in today's scientific landscape.