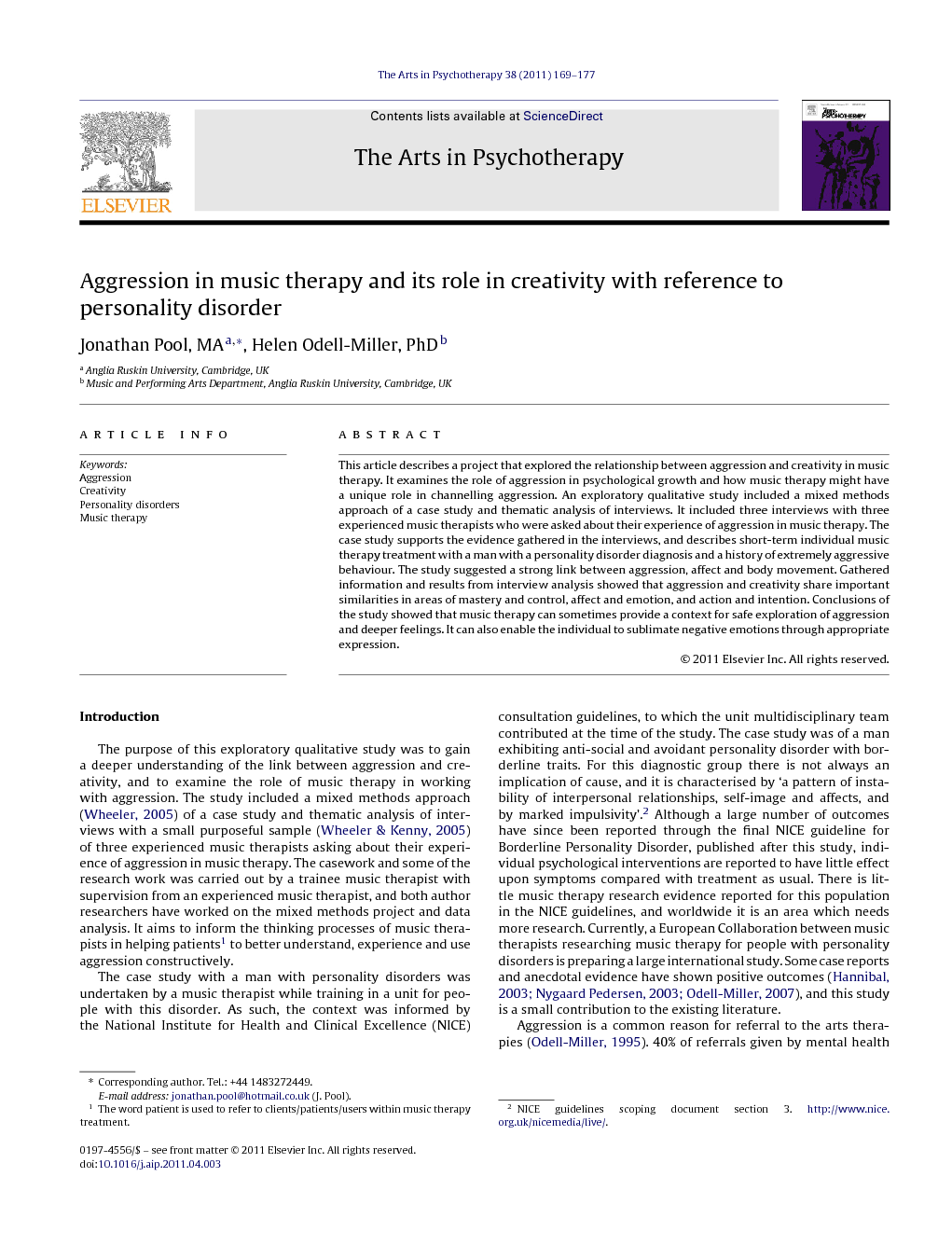 This article describes a project that explored the relationship between aggression and creativity in music therapy. It examines the role of aggression in psychological growth and how music therapy might have a unique role in channelling aggression. An exploratory qualitative study included a mixed methods approach of a case study and thematic analysis of interviews. It included three interviews with three experienced music therapists who were asked about their experience of aggression in music therapy. The case study supports the evidence gathered in the interviews, and describes short-term individual music therapy treatment with a man with a personality disorder diagnosis and a history of extremely aggressive behaviour. The study suggested a strong link between aggression, affect and body movement. Gathered information and results from interview analysis showed that aggression and creativity share important similarities in areas of mastery and control, affect and emotion, and action and intention. Conclusions of the study showed that music therapy can sometimes provide a context for safe exploration of aggression and deeper feelings. It can also enable the individual to sublimate negative emotions through appropriate expression.

The purpose of this exploratory qualitative study was to gain a deeper understanding of the link between aggression and creativity, and to examine the role of music therapy in working with aggression. The study included a mixed methods approach (Wheeler, 2005) of a case study and thematic analysis of interviews with a small purposeful sample (Wheeler & Kenny, 2005) of three experienced music therapists asking about their experience of aggression in music therapy. The casework and some of the research work was carried out by a trainee music therapist with supervision from an experienced music therapist, and both author researchers have worked on the mixed methods project and data analysis. It aims to inform the thinking processes of music therapists in helping patients1 to better understand, experience and use aggression constructively. The case study with a man with personality disorders was undertaken by a music therapist while training in a unit for people with this disorder. As such, the context was informed by the National Institute for Health and Clinical Excellence (NICE) consultation guidelines, to which the unit multidisciplinary team contributed at the time of the study. The case study was of a man exhibiting anti-social and avoidant personality disorder with borderline traits. For this diagnostic group there is not always an implication of cause, and it is characterised by ‘a pattern of instability of interpersonal relationships, self-image and affects, and by marked impulsivity’.2 Although a large number of outcomes have since been reported through the final NICE guideline for Borderline Personality Disorder, published after this study, individual psychological interventions are reported to have little effect upon symptoms compared with treatment as usual. There is little music therapy research evidence reported for this population in the NICE guidelines, and worldwide it is an area which needs more research. Currently, a European Collaboration between music therapists researching music therapy for people with personality disorders is preparing a large international study. Some case reports and anecdotal evidence have shown positive outcomes (Hannibal, 2003, Nygaard Pedersen, 2003 and Odell-Miller, 2007), and this study is a small contribution to the existing literature. Aggression is a common reason for referral to the arts therapies (Odell-Miller, 1995). 40% of referrals given by mental health care professionals in Odell-Miller's survey were aggression-related or cited aggression as the reason for referral. In her paper on art therapy and children who behave aggressively, Nissimov-Nahum (2008) stated that childhood aggression is a widespread problem. Other articles have focused on treatment of aggression and anger in music therapy (Bensimon et al., 2008 and Jackson, 2010), in the arts therapies (Smeijsters & Cleven, 2006) and in psychodynamic psychotherapy combined with movement (Twemlow, Sacco and Fonagy, 2008). A typical aim of music therapy in treating aggression is to reduce challenging behaviour (Derrington, 2005). Performing and song-writing can be stabilising factors in exploring and developing a sense of self (Baker et al., 2005 and Derrington, 2005). Others have discussed the relationship between a developing sense of identity and creativity (Storr, 1972 and Winnicott, 1971). Music therapy enables people to experience themselves in a safe environment, by providing a psychological and musical space and another mind (the therapist's) to increase the capacity for insight into themselves and their behaviour. Arts therapies focus strongly on emotions and behaviour (Smeijsters & Cleven, 2006). Many psychological treatments enable aggressive expression by the patient, especially when aggression is suppressed or presented inappropriately. This suggests that aggression may be something with which we must learn to live, rather than hide, and that we must learn how to use it constructively in order to fulfil the needs of the individual within the boundaries of society. For these reasons, we decided to examine further the nature of aggression in music therapy.