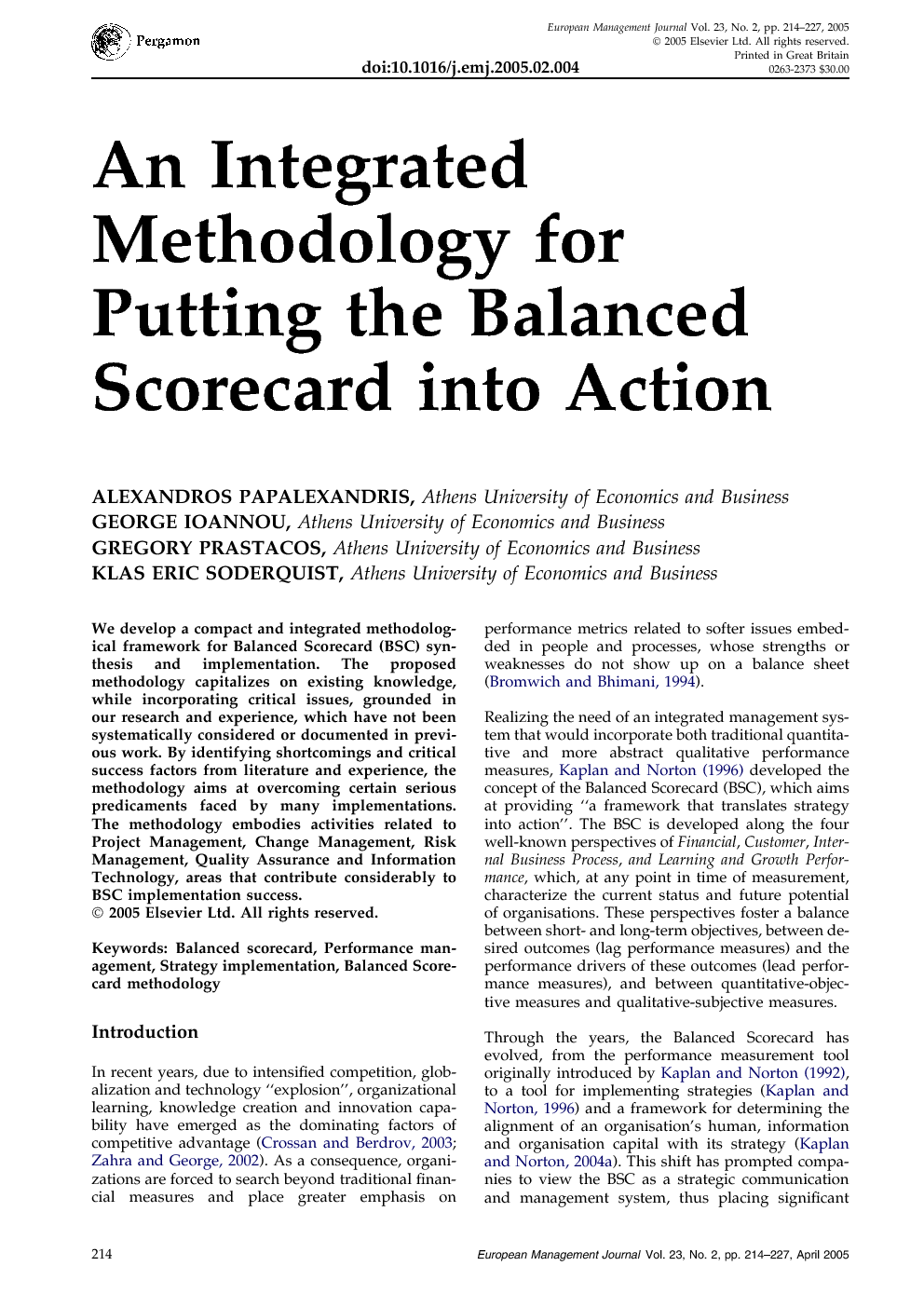 We develop a compact and integrated methodological framework for Balanced Scorecard (BSC) synthesis and implementation. The proposed methodology capitalizes on existing knowledge, while incorporating critical issues, grounded in our research and experience, which have not been systematically considered or documented in previous work. By identifying shortcomings and critical success factors from literature and experience, the methodology aims at overcoming certain serious predicaments faced by many implementations. The methodology embodies activities related to Project Management, Change Management, Risk Management, Quality Assurance and Information Technology, areas that contribute considerably to BSC implementation success.

In recent years, due to intensified competition, globalization and technology “explosion”, organizational learning, knowledge creation and innovation capability have emerged as the dominating factors of competitive advantage (Crossan and Berdrov, 2003; Zahra and George, 2002). As a consequence, organizations are forced to search beyond traditional financial measures and place greater emphasis on performance metrics related to softer issues embedded in people and processes, whose strengths or weaknesses do not show up on a balance sheet (Bromwich and Bhimani, 1994). Realizing the need of an integrated management system that would incorporate both traditional quantitative and more abstract qualitative performance measures, Kaplan and Norton (1996) developed the concept of the Balanced Scorecard (BSC), which aims at providing “a framework that translates strategy into action”. The BSC is developed along the four well-known perspectives of Financial, Customer, Internal Business Process, and Learning and Growth Performance, which, at any point in time of measurement, characterize the current status and future potential of organisations. These perspectives foster a balance between short- and long-term objectives, between desired outcomes (lag performance measures) and the performance drivers of these outcomes (lead performance measures), and between quantitative-objective measures and qualitative-subjective measures. Through the years, the Balanced Scorecard has evolved, from the performance measurement tool originally introduced by Kaplan and Norton (1992), to a tool for implementing strategies (Kaplan and Norton, 1996) and a framework for determining the alignment of an organisation’s human, information and organisation capital with its strategy (Kaplan and Norton, 2004a). This shift has prompted companies to view the BSC as a strategic communication and management system, thus placing significant weight on several implementation issues that have not previously been documented in the literature. Kaplan and Norton provide significant insight into the application potential of the Balanced Scorecard for private and public sector companies and give numerous design and implementation examples from a range of industries. However, little attention is paid to different critical supporting factors such as change management, project management, IT infrastructure development, quality assurance and risk management that, from our experience, are critical for the successful implementation of a Balanced Scorecard. Furthermore, the methodological approaches in the numerous case studies of BSC implementation projects vary significantly in the sequence, content and number of implementation steps and phases, and are applicable to particular companies and market segments rather than attempting to provide generalised knowledge. For example Ahn (2001) uses a six phase approach to implement a BSC; Brewer (2002) proposes a four step Value Dynamics Framework for translating strategy into measures; Letza (1996), uses a six step approach methodology for implementing the BSC; and Lohman et al. (2004) proposes a nine step approach for BSC implementation. In this paper we develop a holistic but lean methodological approach for BSC synthesis and implementation, which capitalises on the work of Kaplan and Norton and on the knowledge already documented in similar implementations from different countries, macro and micro conditions, industries and company sizes (e.g. Ahn, 2001; Brewer, 2002; Ioannou et al., 2002; Letza, 1996; Lohman et al., 2004; Papalexandris et al., 2004; Speckbacher et al., 2003), while incorporating critical issues that have not previously been considered systematically. In this way we attempt to generalise new and previous findings so that the principles presented in this paper can be applied universally. Finally, shortcomings and critical success factors from similar implementations and methodologies are identified in order to propose a methodology that can maximize the benefits and capitalise on the identified critical success factors of BSC implementation, while overcoming certain serious predicaments like budget and time overruns, resistance to change, inefficient or misleading decision making information etc., faced by many implementations. The remainder of the paper is organized as follows: Section two presents the proposed methodological approach. Section three analytically outlines the proposed phases and the activities performed in each phase. Section four discusses particular issues concerning the use of the methodology and details on the managerial implications that this BSC approach offers. Finally, in section five we present the concluding remarks

Turner (1992) describes a project as: “an endeavour in which human, material and financial resources are organised in a novel way, to undertake a unique scope of work of given specification, within constraints of cost and time, so as to achieve unitary, beneficial change, through the delivery of quantified and qualitative objectives”. Under these principles, we have developed an integrated methodological approach for BSC synthesis and implementation. Our proposed methodological approach is based on the framework of Kaplan and Norton, while providing a detailed documented course of action and a set of procedures, which encompass industry best practice combined with experience of BSC and other performance measurement system implementations. The methodology also embodies critical aspects such as Project Management, Change Management, Risk Management, Quality Assurance and Information Technology, areas that contribute considerably to the success of the BSC project but which are mostly overlooked in other BSC research. Thus, our methodology aims to provide a comprehensive framework, which will cover the important aspects of a Balanced Scorecard synthesis and hence can serve as a guideline for implementations. Even though every attempt is made in generalising the concepts presented in this paper, company specific factors, such as size, strategy, resources etc., requiring deviations from the proposed methodology, will always need to be considered while implementing a BSC. Furthermore, even though most organizations seem to agree that a BSC implementation will be beneficial, one must not overlook the fact that its effectiveness and benefit is highly dependent on the content of the implementation process that is used.