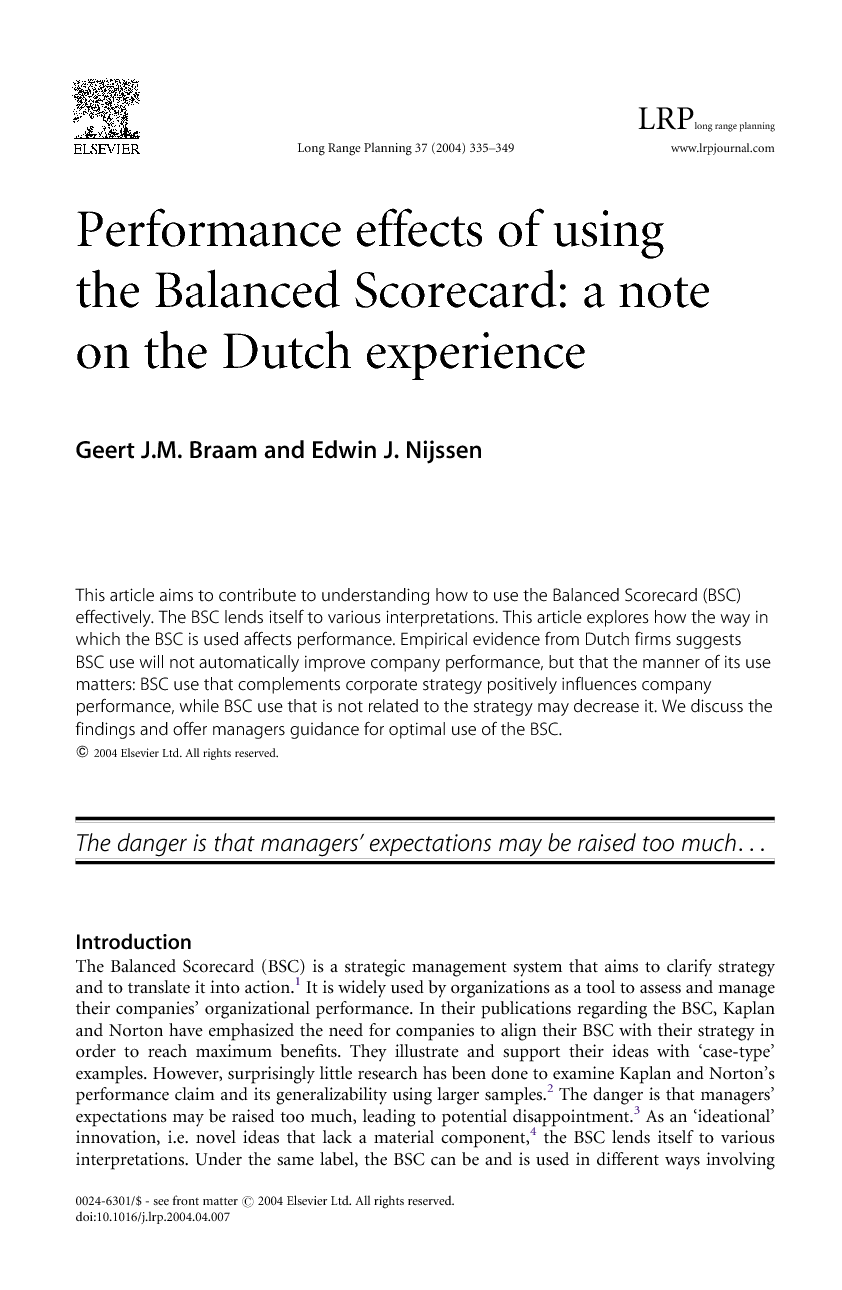 This article aims to contribute to understanding how to use the Balanced Scorecard (BSC) effectively. The BSC lends itself to various interpretations. This article explores how the way in which the BSC is used affects performance. Empirical evidence from Dutch firms suggests BSC use will not automatically improve company performance, but that the manner of its use matters: BSC use that complements corporate strategy positively influences company performance, while BSC use that is not related to the strategy may decrease it. We discuss the findings and offer managers guidance for optimal use of the BSC.

Table 3 shows the results of the regression analysis for the hypothesized model shown in Figure 1. From the baseline model only strategy was significant (p<0.05) in all regressions. The full model explained 38% of variation of Overall Company Performance (adj. R2=0.38; F=4.3, df=7, p<0.01). A comparison with the outcome of the baseline model showed a substantial and significant positive increase in R2 of 19% (ΔR2=0.19, ΔF=2.8, p<0.05), suggesting that BSC use contributes significantly to a company’s overall performance. The models using the other performance indicators were also significant and explained a fair amount of variance. The results explaining financial company performance were similar to those of overall company performance, although those regarding perceived company performance lagged behind. Moreover, the increase in R2 from the BSC usage variables in this regression was not significant. An explanation may be response bias, i.e. less variation in the subjective performance evaluation than in the overall and objective performance measuresOn closer inspection of Table 3, zooming in on the model and using overall company performance as the dependent variable, we find that the effect of measurement-focused-BSC use was significant but negative. As this is opposite to our expectation, H1 is rejected. The effect of strategy-focused-BSC use on overall company performance was significant and positive, providing support for H2. A similar pattern of effects was found regarding the other performance variables providing further support for our conclusions, although not all effects reached significance (p<0.05). On the one hand, the results suggest that BSC use that is aligned to company strategy positively influences overall company performance, as was hypothesized. A comprehensive set of carefully chosen financial and non-financial measures may provide managers with insights to optimize their companies’ strategy and to improve its competitive position and performance.12 On the other hand, the performance effect of measurement-focused-BSC use is negative. Several explanations exist as to why this manner of BSC use decreases overall company performance. First, measurement applications may be too instrumental: specifically, when management sees implementation and usage of the BSC as an ‘end’ rather than a ‘means’ to a goal, performance may be harmed rather than helped. One respondent from the exhibit case commented: ‘Initially, the focus was too much on making a dashboard. But, by looking only at the dashboard you cannot decide where you want to go’. When designed and used mechanistically, BSC use may result in overbureaucratization and focus on details rather than on the overall picture and strategic direction. A financial director who responded to the survey made the following comment: ‘Because we experienced problems measuring ‘soft information’ elements, we shifted our attention towards searching for valid measures and reliable data but we lost sight of their strategic links.’ A problem may be that in the beginning this ineffectiveness may not show because increases in efficiency measurements suggest improvement. However, efficiency and effectiveness results should be assessed and monitored together carefully. A methodological explanation as to why there is no support for H1 may be the way BSC usage was operationalized. The negative effect of our two-way interaction could be an artifact of the assumption that an equal division of attention across the four BSC perspectives is optimal. Depending on the company’s market and strategy archetype an ‘unbalanced’ but tuned-to-strategy BSC profile may be better than a standard ‘balanced’ BSC.13 We checked different variation for comprehensiveness and balance using different formula but could not detect major changes in the two-way interaction’s influence on performance. Finally, other managerial accounting tools may moderate or reinforce the relationships examined: for instance, the BSC may be incorporated into wider systems, e.g. Enterprise Resource Planning (ERP) systems.14 The question is whether and when these tools become more effective and complement each other or work against each other. Future research may control for or study these effects.