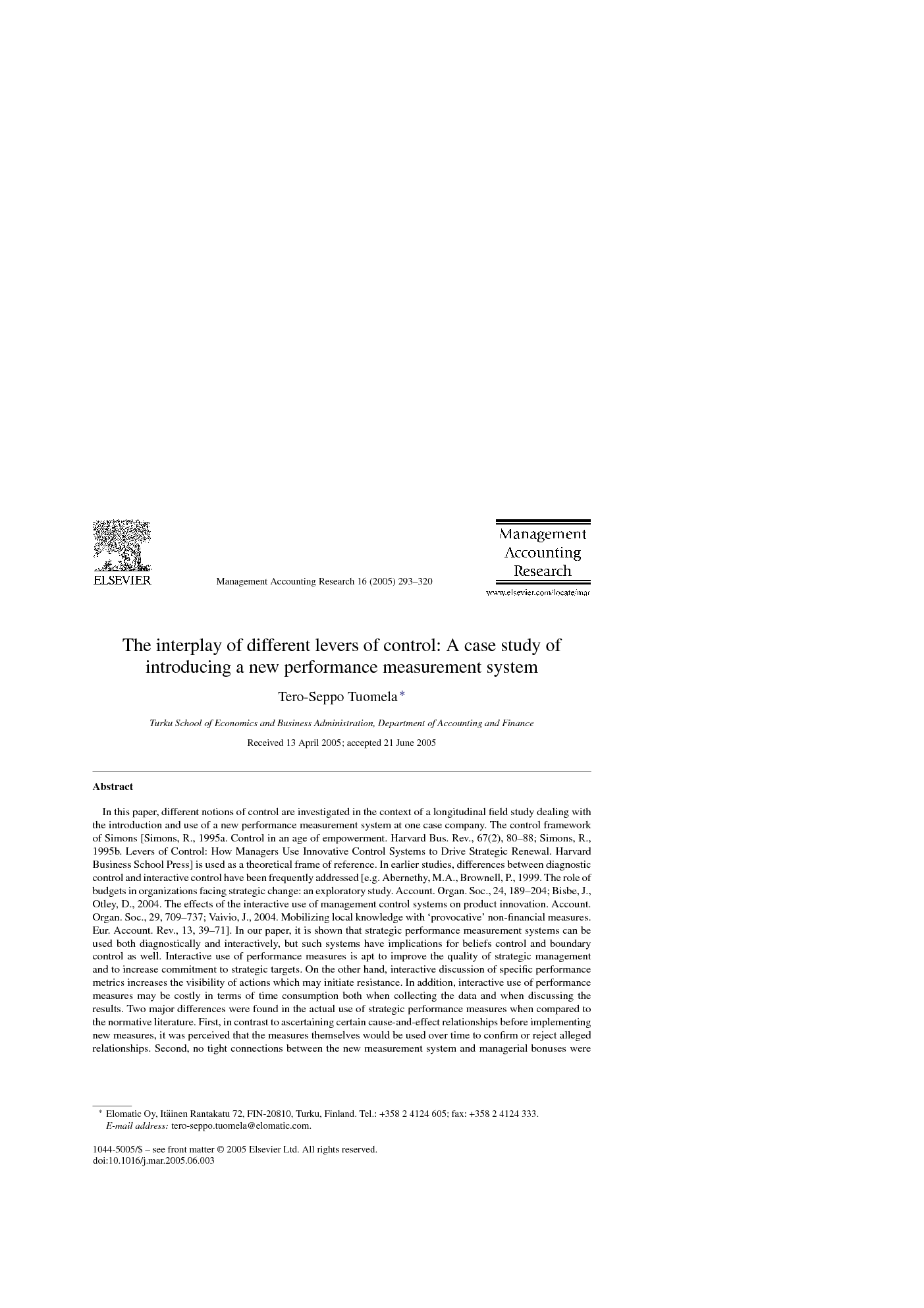 In this paper, different notions of control are investigated in the context of a longitudinal field study dealing with the introduction and use of a new performance measurement system at one case company. The control framework of Simons [Simons, R., 1995a. Control in an age of empowerment. Harvard Bus. Rev., 67(2), 80–88; Simons, R., 1995b. Levers of Control: How Managers Use Innovative Control Systems to Drive Strategic Renewal. Harvard Business School Press] is used as a theoretical frame of reference. In earlier studies, differences between diagnostic control and interactive control have been frequently addressed [e.g. Abernethy, M.A., Brownell, P., 1999. The role of budgets in organizations facing strategic change: an exploratory study. Account. Organ. Soc., 24, 189–204; Bisbe, J., Otley, D., 2004. The effects of the interactive use of management control systems on product innovation. Account. Organ. Soc., 29, 709–737; Vaivio, J., 2004. Mobilizing local knowledge with ‘provocative’ non-financial measures. Eur. Account. Rev., 13, 39–71]. In our paper, it is shown that strategic performance measurement systems can be used both diagnostically and interactively, but such systems have implications for beliefs control and boundary control as well. Interactive use of performance measures is apt to improve the quality of strategic management and to increase commitment to strategic targets. On the other hand, interactive discussion of specific performance metrics increases the visibility of actions which may initiate resistance. In addition, interactive use of performance measures may be costly in terms of time consumption both when collecting the data and when discussing the results. Two major differences were found in the actual use of strategic performance measures when compared to the normative literature. First, in contrast to ascertaining certain cause-and-effect relationships before implementing new measures, it was perceived that the measures themselves would be used over time to confirm or reject alleged relationships. Second, no tight connections between the new measurement system and managerial bonuses were made. This was mostly due to the development process, during which the top managers themselves developed the measures to reflect their belief about the best way of achieving the ultimate financial targets.