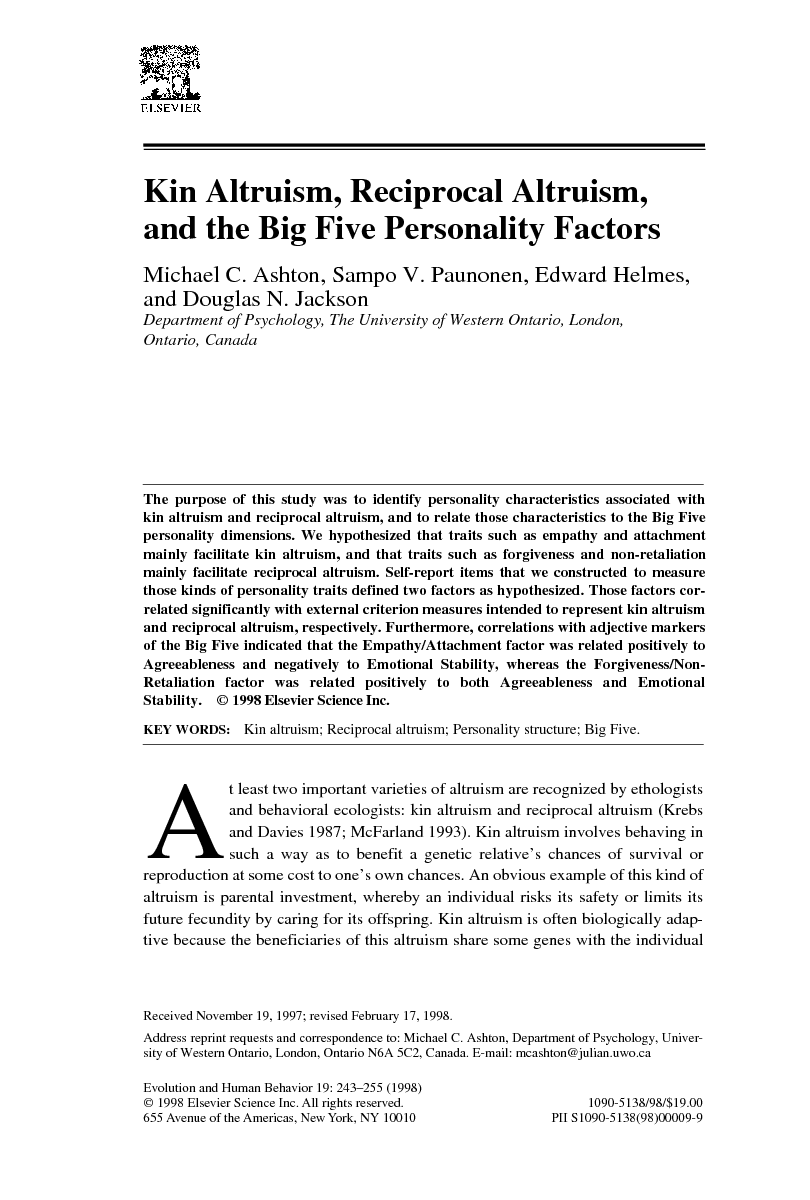 The purpose of this study was to identify personality characteristics associated with kin altruism and reciprocal altruism, and to relate those characteristics to the Big Five personality dimensions. We hypothesized that traits such as empathy and attachment mainly facilitate kin altruism, and that traits such as forgiveness and non-retaliation mainly facilitate reciprocal altruism. Self-report items that we constructed to measure those kinds of personality traits defined two factors as hypothesized. Those factors correlated significantly with external criterion measures intended to represent kin altruism and reciprocal altruism, respectively. Furthermore, correlations with adjective markers of the Big Five indicated that the Empathy/Attachment factor was related positively to Agreeableness and negatively to Emotional Stability, whereas the Forgiveness/Non-Retaliation factor was related positively to both Agreeableness and Emotional Stability.

At least two important varieties of altruism are recognized by ethologists and behavioral ecologists: kin altruism and reciprocal altruism Krebs and Davies 1987 and McFarland 1993. Kin altruism involves behaving in such a way as to benefit a genetic relative’s chances of survival or reproduction at some cost to one’s own chances. An obvious example of this kind of altruism is parental investment, whereby an individual risks its safety or limits its future fecundity by caring for its offspring. Kin altruism is often biologically adaptive because the beneficiaries of this altruism share some genes with the individual who helps them; therefore, the survival and reproduction of the beneficiaries contribute to the propagation of the altruist’s genes (Hamilton 1964). In contrast to kin altruism, reciprocal altruism is the basis for long-term cooperative interactions. It involves acting in such a way that another individual is benefited at some expense to oneself, with the expectation that the recipient—who may be completely unrelated to the altruist—will return such assistance in the future. If the benefits to the recipient of this assistance outweigh the costs to the benefactor, then interactions of this kind, when reciprocated, result in a long-run net gain in chances for survival and reproduction for both individuals (Trivers 1971). The existence of individual differences in the tendency to behave altruistically raises at least two important questions. First, given that kin-altruistic and reciprocal-altruistic tendencies are supposed to be species typical, why are there any individual differences at all in these tendencies? Second, how do individual differences in kin-altruistic and reciprocal-altruistic tendencies relate to the basic dimensions of human personality? Evolutionary or functional explanations of personality variation, which presumably subsumes variation in altruistic tendencies, have been summarized by Buss (1991) and Daly (1996). Personalities may differ as a result of: (1) selectively neutral mutations; (2) selectively important mutations that primarily affect non-personality-relevant characteristics; or (3) differences in behavioral strategies. With regard to the latter possibility, several evolutionary paths to the emergence of personality differences have been described by Buss (1991)(: 473–476). These paths include both: (1) discrete alternative strategies, whereby genetic differences or environmental conditions determine the individual’s adoption of one of a small number of discrete behavioral strategies (see also Wilson 1994); and (2) calibration of psychological mechanisms, whereby heritable variation or developmental experience set a threshold on a species-typical behavior at any point within a continuous distribution. We will not attempt in this article to assess the relative validity of the competing evolutionary explanations for interindividual variation in characteristics such as kin-altruistic and reciprocal-altruistic tendencies. Instead, we focus on the issue of how those tendencies relate to the basic dimensions of human personality. Currently, the most popular model of personality structure is the Five-Factor Model, which posits exactly five major, independent personality factors Digman 1990, Goldberg 1993 and McCrae and John 1992. These “Big Five” factors are typically known as: (I) Surgency (or Extraversion), (II) Agreeableness, (III) Conscientiousness, (IV) Emotional Stability (vs. Neuroticism), and (V) Intellect (or Imagination, or Openness to Experience). Of the Big Five personality dimensions, only the Agreeableness factor, a bipolar dimension defined in lexical studies by such adjectives as cooperative and kind versus cold and unsympathetic (Saucier and Goldberg 1996), is generally thought to be strongly related to behavior that is altruistic versus antagonistic or prosocial versus antisocial. But if kin altruism and reciprocal altruism are independent, then one would expect the existence of two major personality factors involving traits that facilitate the two kinds of altruism. Our aim in the present study was to identify personality traits associated with each variety of altruism, and then to locate those characteristics within the Big Five factor space.