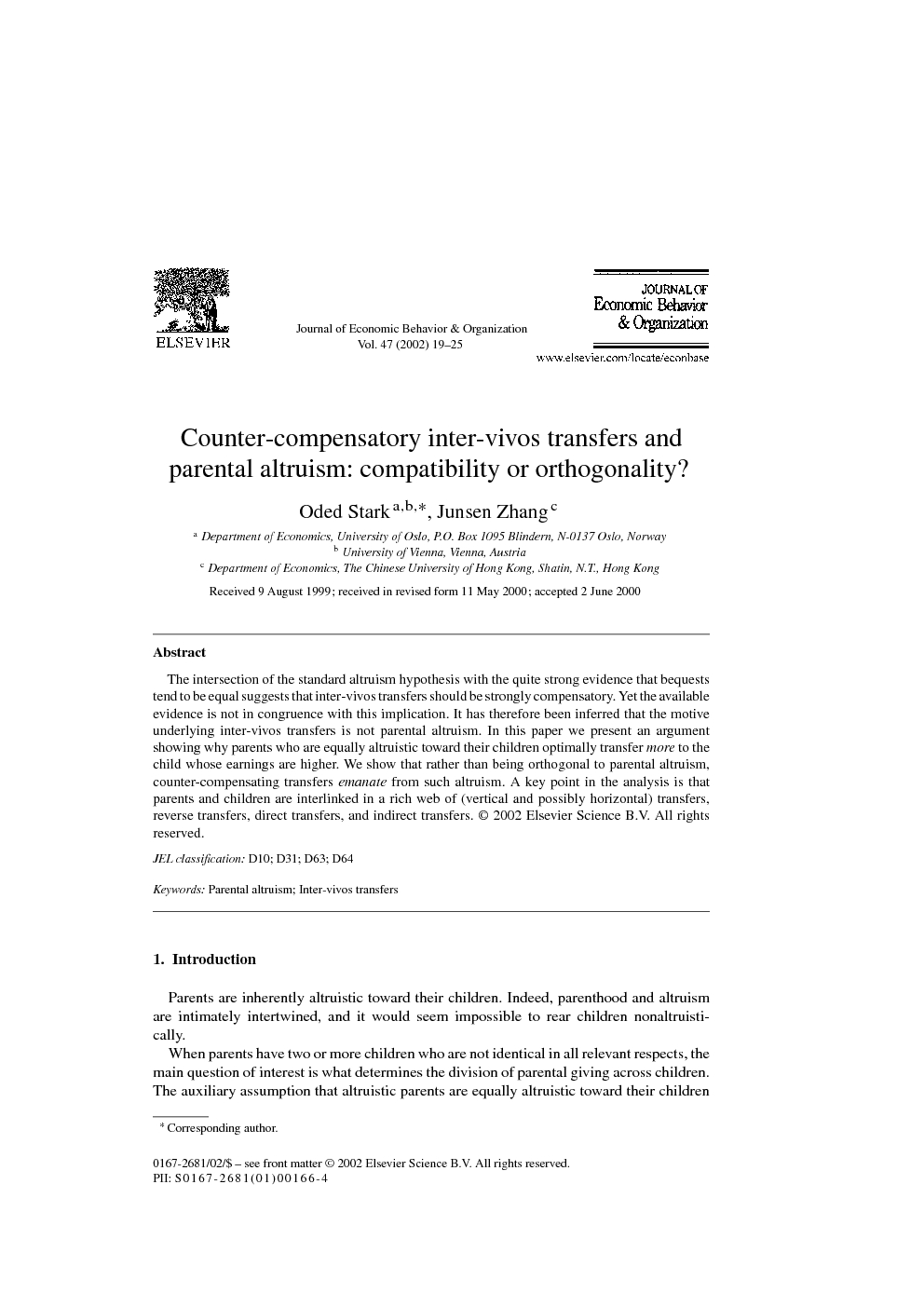 The intersection of the standard altruism hypothesis with the quite strong evidence that bequests tend to be equal suggests that inter-vivos transfers should be strongly compensatory. Yet the available evidence is not in congruence with this implication. It has therefore been inferred that the motive underlying inter-vivos transfers is not parental altruism. In this paper we present an argument showing why parents who are equally altruistic toward their children optimally transfer more to the child whose earnings are higher. We show that rather than being orthogonal to parental altruism, counter-compensating transfers emanate from such altruism. A key point in the analysis is that parents and children are interlinked in a rich web of (vertical and possibly horizontal) transfers, reverse transfers, direct transfers, and indirect transfers.

Parents are inherently altruistic toward their children. Indeed, parenthood and altruism are intimately intertwined, and it would seem impossible to rear children nonaltruistically. When parents have two or more children who are not identical in all relevant respects, the main question of interest is what determines the division of parental giving across children. The auxiliary assumption that altruistic parents are equally altruistic toward their children leads to a theoretical prediction that a child who is less “well off” will receive more than a child who is “better off”. If well-being is measured by earnings, the prediction is that more will be given to the child who earns less (Becker and Tomes, 1979). The available evidence is, however, not easily reconcilable with this prediction. When we examine the distribution of bequests, it appears that parents typically divide their estate equally among their children. Menchik, 1980 and Menchik, 1988 finds that in the division of large estates in Connecticut (1930–1945), equal bequests predominated. Similarly, an examination of wills in Cleveland, Ohio (1964–1965), shows that about 80 percent of siblings shared the estate equally. Wilhelm (1996) finds that in the US (1982), 68.6 percent of parents divided their estates exactly equally among their children, and 88 percent divided their estates approximately equally. Dunn and Phillips (1997) find that in the US (1992), 90 percent of parents named all their children as beneficiaries in their wills, and that about 95 percent of these parents reported that the will “provides about equally” for all the children. In the second section of this paper we explain briefly why equal altruism toward children whose earnings differ is compatible with equal bequests. The elimination of a degree of freedom with respect to the division of bequests places a heavier burden on inter-vivos transfers. With no recourse to compensating or counter-compensating bequests, inter-vivos transfers become the means of choice to parents (who are equally altruistic toward their children) for affecting the differential earnings of their children. There is some evidence on the distribution of inter-vivos transfers across children. Cox (1987) and Cox and Rank (1992) find that, conditional on a positive transfer having occurred, inter-vivos transfers increased as the income of the recipient increased. The finding is interpreted to be consistent with “an exchange motive” for transfers between parents and children but not with altruism. McGarry (1999) finds that the probability that parents made inter-vivos transfers to their children was related positively and significantly to the children’s level of schooling. This finding appears to be at odds with the altruism hypothesis: if schooling is a proxy for permanent income, the probability of a transfer ought to fall with increases in this variable. Altonji et al. (1992) test consumption and income data for the implicit presence of compensatory inter-vivos transfers among extended family members. If transfers are altruistically motivated, within-family consumption differences should be independent of the within-family distribution of income, but the evidence is to the contrary. Similarly, Altonji et al. (1997) find only a modest effect from intergenerational altruism. Specifically, they test a general altruism hypothesis of inter-vivos transfers: a US$ 1 increase in the income of parents who are actively engaged in transferring funds to a child coupled with a US$ 1 reduction in that child’s income would result in a US$ 1 increase in the parents’ transfer to the child. Their findings reject the altruism hypothesis. Redistributing US$ 1 from a recipient child to the donor parents leads to less than a 13-cent increase in the parents’ inter-vivos transfer to the child. Somewhat surprisingly then, the available evidence does not provide strong support for the prediction that inter-vivos transfers are compensatory. In Section 3 we show why this is so: altruistic parents who care equally about their children may well transfer more to the child whose earnings are higher. Rather than being orthogonal to parental altruism, counter-compensatory inter-vivos transfers emanate from parental altruism.