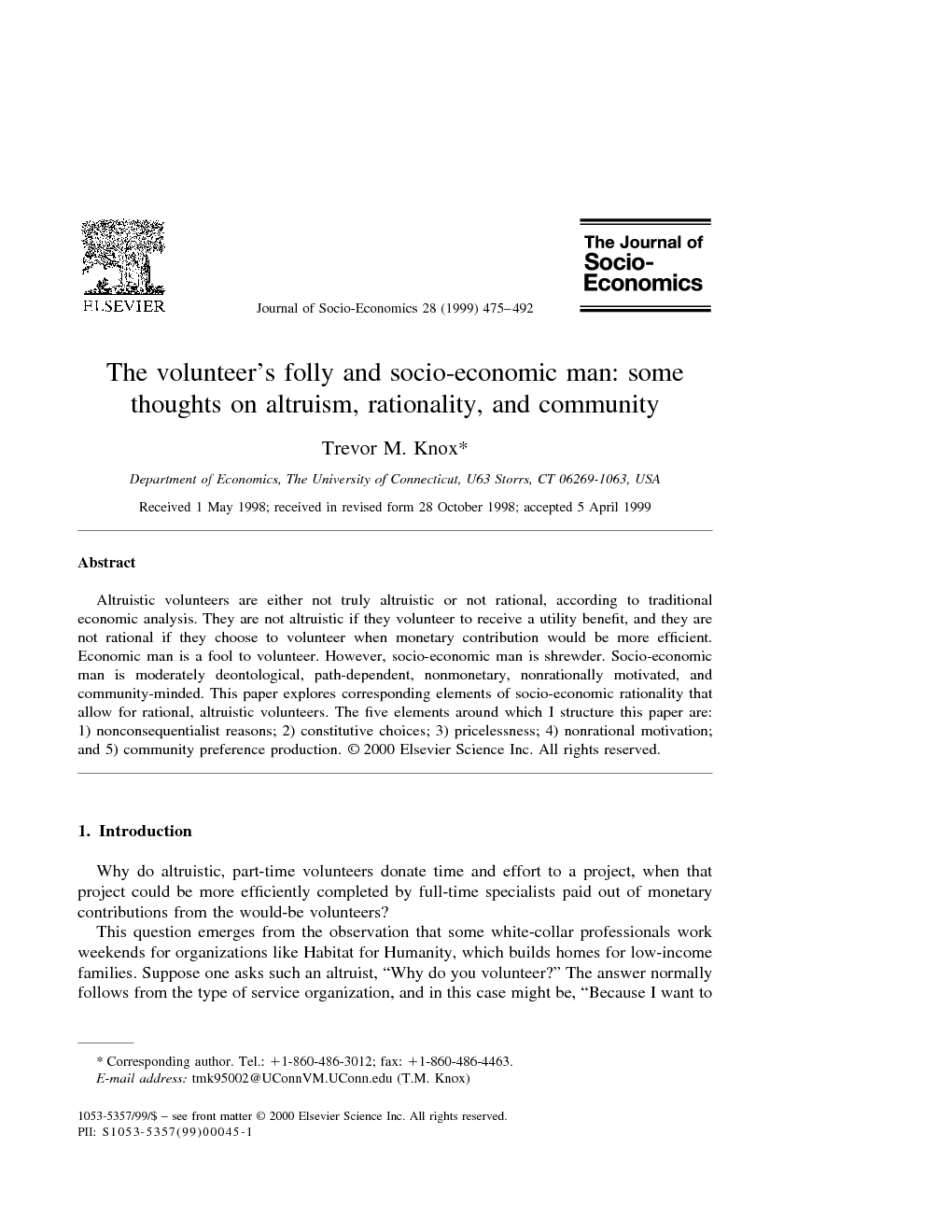 Altruistic volunteers are either not truly altruistic or not rational, according to traditional economic analysis. They are not altruistic if they volunteer to receive a utility benefit, and they are not rational if they choose to volunteer when monetary contribution would be more efficient. Economic man is a fool to volunteer. However, socio-economic man is shrewder. Socio-economic man is moderately deontological, path-dependent, nonmonetary, nonrationally motivated, and community-minded. This paper explores corresponding elements of socio-economic rationality that allow for rational, altruistic volunteers. The five elements around which I structure this paper are: 1) nonconsequentialist reasons; 2) constitutive choices; 3) pricelessness; 4) nonrational motivation; and 5) community preference production.

To quote Simon (1993), “In several areas of economics, current doctrines will have to undergo severe revision as motives other than economic gain (and especially altruistic ones) assume their appropriate place in theory” (p. 159). The rational fools of mainstream economics would not commit the volunteer’s folly, but rational people do. In this paper I have attempted to show that the “volunteer’s folly” is really no such thing, and that economic rationality, too narrowly defined, has failed to explain the altruist’s choice to volunteer time and effort rather than money. As much as economists would like to purge all normative considerations from their conception of rationality, this exercise merely empties the term “rationality” of its essential meaning. If economics is to be compatible with altruism in general, economists must postulate normative, objective values. Yet this change in premise is not by itself sufficient to explain the choice to donate time and effort rather than money. A new “socio-economic rationality” would recognize nonconsequentialist reasons, constitutive choices, pricelessness, nonrational motivation, and community preference production. Although some of the modifications these elements entail could conceivably be built into the existing analytic framework of neoclassical theory, others—the Humean account of motivation as distinct from goals, for example—are less easily assimilated. Two analytic constructs, in particular, are useful to socialize economic man. First, meta-preferences explain counter-preferential choice and facilitate an evolutionary, path-dependent theory of preference formation. In this dynamic context, meta-preferences rationalize altruistic volunteering on the basis of who one is to become. Second, by contrast, concepts of self rationalize altruistic volunteering on the basis of who one already is. Well-defined concepts of self are thus more akin to constraints than they are too higher-order preferences. These two constructs offer alternative ways to conceptualize the elements of a socio-economic rationality I have discussed. With regard to the rationality of altruistic volunteering, it is noteworthy that both the notion of pricelessness and of community preference production involve something like a meta-preference for participating in the development of community. Other more radical conclusions may be drawn from this discussion. One is that rationality is not properly an economic concept at all. Attempts to reconcile economic “rationality” with the value-laden, common-sense (and philosophical) meaning of the term may be akin to reconciling American and European “football” by rewriting the rule books—hardly a fruitful exercise. One might argue, then, that economic rationality may harmlessly coexist with alternative definitions, with the understanding that rationality in economics is limited to little more than technical efficiency in the production of goods, services, and utility. But unlike football, “rationality” hits with evaluative, not just descriptive, impact. For this reason, incentives exist to promote confusion to bestow upon one definition of rationality, the qualities of the other.