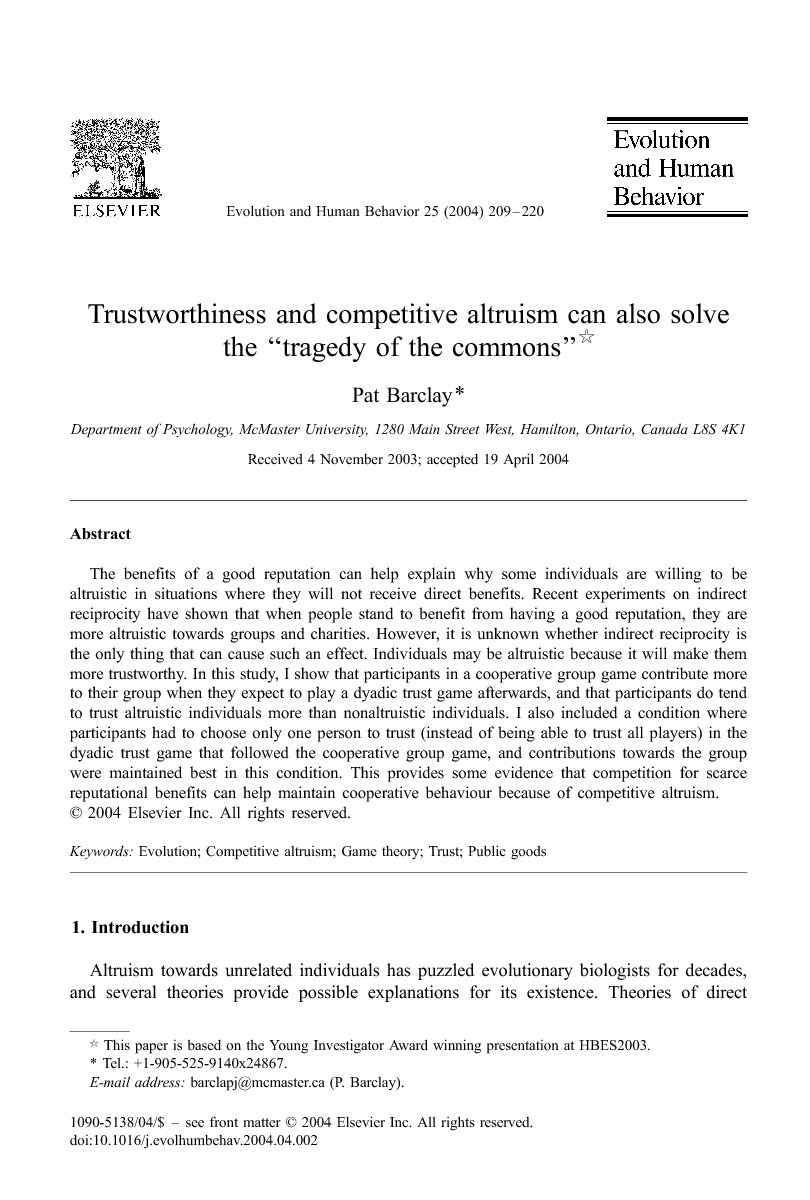 The benefits of a good reputation can help explain why some individuals are willing to be altruistic in situations where they will not receive direct benefits. Recent experiments on indirect reciprocity have shown that when people stand to benefit from having a good reputation, they are more altruistic towards groups and charities. However, it is unknown whether indirect reciprocity is the only thing that can cause such an effect. Individuals may be altruistic because it will make them more trustworthy. In this study, I show that participants in a cooperative group game contribute more to their group when they expect to play a dyadic trust game afterwards, and that participants do tend to trust altruistic individuals more than nonaltruistic individuals. I also included a condition where participants had to choose only one person to trust (instead of being able to trust all players) in the dyadic trust game that followed the cooperative group game, and contributions towards the group were maintained best in this condition. This provides some evidence that competition for scarce reputational benefits can help maintain cooperative behaviour because of competitive altruism.

Altruism towards unrelated individuals has puzzled evolutionary biologists for decades, and several theories provide possible explanations for its existence. Theories of direct reciprocity (Trivers, 1971) and indirect reciprocity (Alexander, 1987) suggest that organisms can succeed by reciprocating altruistic acts towards other altruists. Direct reciprocity occurs when individuals reciprocate generous acts towards others who have been generous to them in the past. Indirect reciprocity occurs when individuals provide benefits for others who have been generous to anyone, and in turn are rewarded for this benevolence by individuals other than the recipients. Many computer simulations and experimental games have shown that some forms of direct and indirect reciprocity can allow for the evolution of altruism, and people actually do engage in direct and indirect reciprocity (see especially Axelrod, 1984, Nowak & Sigmund, 1998 and Wedekind & Milinski, 2000; but see also Leimar & Hammerstein, 2001). However, these theories by themselves cannot account for altruistic acts that cannot be directed towards particular individuals, such as the provision of public goods. A public good is something that people have to incur costs to provide and yet all members of the group benefit from it whether or not they helped provide it (Davis & Holt, 1993), so the public good is open to exploitation by free riders. Examples of public goods include group protection, irrigation, and any collective action project. Individuals have an incentive to not provide public goods because the benefits of providing them are spread among many people, whereas only the altruists bear the cost. Thus, the provision of public goods is very much like the classic “tragedy of the commons” situation introduced by Hardin (1968). One would expect that altruism in such situations would be selected against, and yet many studies demonstrate that humans are willing to contribute to public goods (e.g., Fehr & Gächter, 2000). People may be altruistic in these situations if there is a chance that they will earn a good reputation that will later be repaid in direct or indirect reciprocity (Alexander, 1987). Supporting this, Milinski, Semmann, and Krambeck (2002) had participants play an experimental game where they alternated between the opportunity to donate money to other players (an indirect reciprocity game from Wedekind & Milinski, 2000) or the opportunity to donate to a public good. They found that people were more likely to contribute to public goods when they expected future indirect reciprocity games, and that participants donated more often in the indirect reciprocity game towards people who contributed to the public good. However, the rewarding of altruists (one component of indirect reciprocity) is not the only way in which an individual might benefit from a reputation for altruism. People often engage in dyadic relations in which they have to trust another person, and competition to form these cooperative partnerships could also account for the importance of reputation. The present study examines whether humans are more willing to trust altruistic individuals than nonaltruistic individuals in a situation where they might be cheated. Alternately, people might not do so, because it would then become possible for individuals to send a dishonest signal by being generous in order to deceive others into trusting them. This would reduce the effectiveness of altruism as a signal of trustworthiness, such that people do not trust altruists any more than nonaltruists. Given that coalitions and reciprocal altruism are integral parts of human interaction and carry great potential benefits and costs, we can expect careful choice of cooperative partners (Cosmides & Tooby, 1992). If altruism can signal a willingness to cooperate in partnerships, then altruistic individuals will be desirable partners Alexander, 1987 and Brown & Moore, 2000. However, no one can interact with all people all of the time, and people tend to form friendships or interact more frequently with some individuals than others. This should create a subtle competition to be more altruistic than others in order to be preferred as an exchange partner (Roberts, 1998). Whether this occurs in humans is an open question, but it may be occurring in nonhuman grooming partnerships when good reciprocators prefer to interact with each other (Barrett, Henzi, Weingrill, Lycett, & Hill, 2000). It is similar to Seyfarth's (1977) model of primate grooming where there is competition to associate with the highest-ranking individuals (see Schino, 2001, for a review). More generally, competitive altruism could occur whenever the most altruistic individual in a group can stand to receive more benefits than other altruistic individuals, whether those benefits be better partnerships or not. No studies have explicitly tested for the existence of competitive altruism in humans, so the present study investigated whether humans will compete to be the most altruistic member of a group. I used a public goods game (PGG) where each participant had an incentive to be selfish, but all participants could have done well if everyone was altruistic. Past studies using PGGs have shown that contributions tend to fall by the last round (Davis & Holt, 1993), and especially in the last round if participants know when the last round is. Therefore, the present study tested whether having an incentive to compete for the most altruistic reputation would maintain contributions better than if there were no extra incentive for being the most altruistic individual.