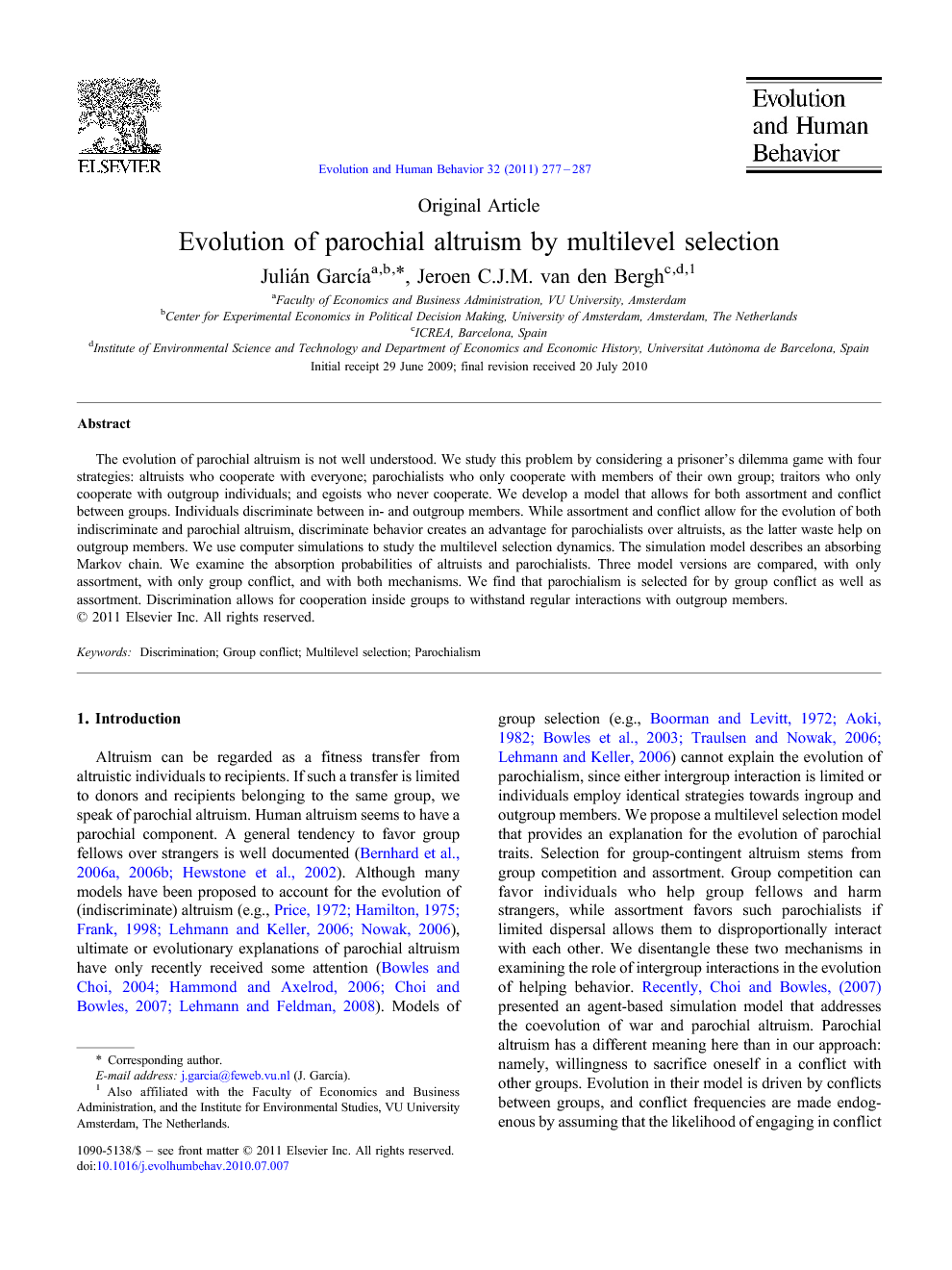 The evolution of parochial altruism is not well understood. We study this problem by considering a prisoner's dilemma game with four strategies: altruists who cooperate with everyone; parochialists who only cooperate with members of their own group; traitors who only cooperate with outgroup individuals; and egoists who never cooperate. We develop a model that allows for both assortment and conflict between groups. Individuals discriminate between in- and outgroup members. While assortment and conflict allow for the evolution of both indiscriminate and parochial altruism, discriminate behavior creates an advantage for parochialists over altruists, as the latter waste help on outgroup members. We use computer simulations to study the multilevel selection dynamics. The simulation model describes an absorbing Markov chain. We examine the absorption probabilities of altruists and parochialists. Three model versions are compared, with only assortment, with only group conflict, and with both mechanisms. We find that parochialism is selected for by group conflict as well as assortment. Discrimination allows for cooperation inside groups to withstand regular interactions with outgroup members.

Altruism can be regarded as a fitness transfer from altruistic individuals to recipients. If such a transfer is limited to donors and recipients belonging to the same group, we speak of parochial altruism. Human altruism seems to have a parochial component. A general tendency to favor group fellows over strangers is well documented (Bernhard et al., 2006a, Bernhard et al., 2006b and Hewstone et al., 2002). Although many models have been proposed to account for the evolution of (indiscriminate) altruism (e.g., Price, 1972, Hamilton, 1975, Frank, 1998, Lehmann and Keller, 2006 and Nowak, 2006), ultimate or evolutionary explanations of parochial altruism have only recently received some attention (Bowles and Choi, 2004, Hammond and Axelrod, 2006, Choi and Bowles, 2007 and Lehmann and Feldman, 2008). Models of group selection (e.g., Boorman and Levitt, 1972, Aoki, 1982, Bowles et al., 2003, Traulsen and Nowak, 2006 and Lehmann and Keller, 2006) cannot explain the evolution of parochialism, since either intergroup interaction is limited or individuals employ identical strategies towards ingroup and outgroup members. We propose a multilevel selection model that provides an explanation for the evolution of parochial traits. Selection for group-contingent altruism stems from group competition and assortment. Group competition can favor individuals who help group fellows and harm strangers, while assortment favors such parochialists if limited dispersal allows them to disproportionally interact with each other. We disentangle these two mechanisms in examining the role of intergroup interactions in the evolution of helping behavior. Recently, Choi and Bowles, (2007) presented an agent-based simulation model that addresses the coevolution of war and parochial altruism. Parochial altruism has a different meaning here than in our approach: namely, willingness to sacrifice oneself in a conflict with other groups. Evolution in their model is driven by conflicts between groups, and conflict frequencies are made endogenous by assuming that the likelihood of engaging in conflict depends on the number of parochialists in a group. Group conflicts entail an explicit cost. A recent paper by Lehmann and Feldman (2008) also examines how individual traits may coevolve with intergroup conflicts and how the latter may have reproduction-enhancing effects for different life-history features such as migration and group size, as well as for sex in diploid individuals. The focus of these models is the evolution of hostility between groups. This fits the aim of providing an evolutionary explanation of warfare. Instead, we aim to explain the evolution of group-contingent altruism. We study the evolution of parochial traits by formalizing strategic interactions between individuals from different groups in a social dilemma game. The model includes two ingredients: assortative group formation and conflict between groups. Interactions resemble the experimental set-up of Bernhard et al., 2006a and Bernhard et al., 2006b), in which matching occurs with members of the own and other groups. Our model of the evolution of group-contingent altruism, in particular with variation in the importance of contacts with members of other groups, allows for empirical application to the evolution of early humans, who may have had few or many intergroup contacts. We first examine whether parochial behavior can arise in unstructured large populations. Next, we consider group conflict and assess the odds for a mutant parochial strategy to reach fixation in an egoist population. The interaction of discrimination, conflict and assortment is examined in detail by simulating a Moran process following the model presented by Traulsen and Nowak (2006). We examine three model versions, which emphasize different ingredients of the evolution of parochial behavior.

This article has studied the evolution of discriminatory strategies in a prisoner's dilemma game. We considered the interaction between four strategies, namely egoists, altruists, parochialists, and traitors. It was first argued that selection in a large unstructured population cannot explain the evolution of parochial altruism. Next, we analyzed the stability of egoists against altruist and parochialist mutants. The main result here is that egoist groups with parochialist mutants are more likely to win conflicts against purely egoist groups than egoists groups with altruist mutants. We developed a computational model with selection occurring at the levels of groups and individuals. We included discriminate strategies, intergroup interactions and conflict. We first studied a model version in which conflict is absent so that selection is exclusively driven by assortment. In a second model version selection is driven by group conflict and assortment. In a third model version, groups are reshuffled every generation so that there is no assortment, and selection is exclusively driven by conflict. Intergroup interactions harm the evolution of cooperation. Since early humans may have had few or many intergroup contacts, the ability to discriminate individuals from other groups is a possible mechanism that would allow cooperators to sustain cooperation inside their groups. This may explain some of the parochial features reported in human altruism. Fixation probabilities in the conflict model are higher than those obtained in the assortment model. This holds for the most conservative comparison, when fixation in the splitting model is at its highest (by setting q=1) and conflict is rare (κ→0). While qualitatively the two models give rise to the same patterns, the main difference is that the process of group conflict apparently always creates more intense competition between groups. In the group conflict scenario, differences in total group payoff are more of a determinant in deciding which groups proliferate and which groups die out. Discrimination allows cooperation inside groups to be maintained when individuals interact regularly with outsiders. Group conflict as well as assortment select for parochial behavior. Selection for such behavior is strongest when the two selection mechanisms are both present, migration is low, and chance has a small influence on winning a conflict.