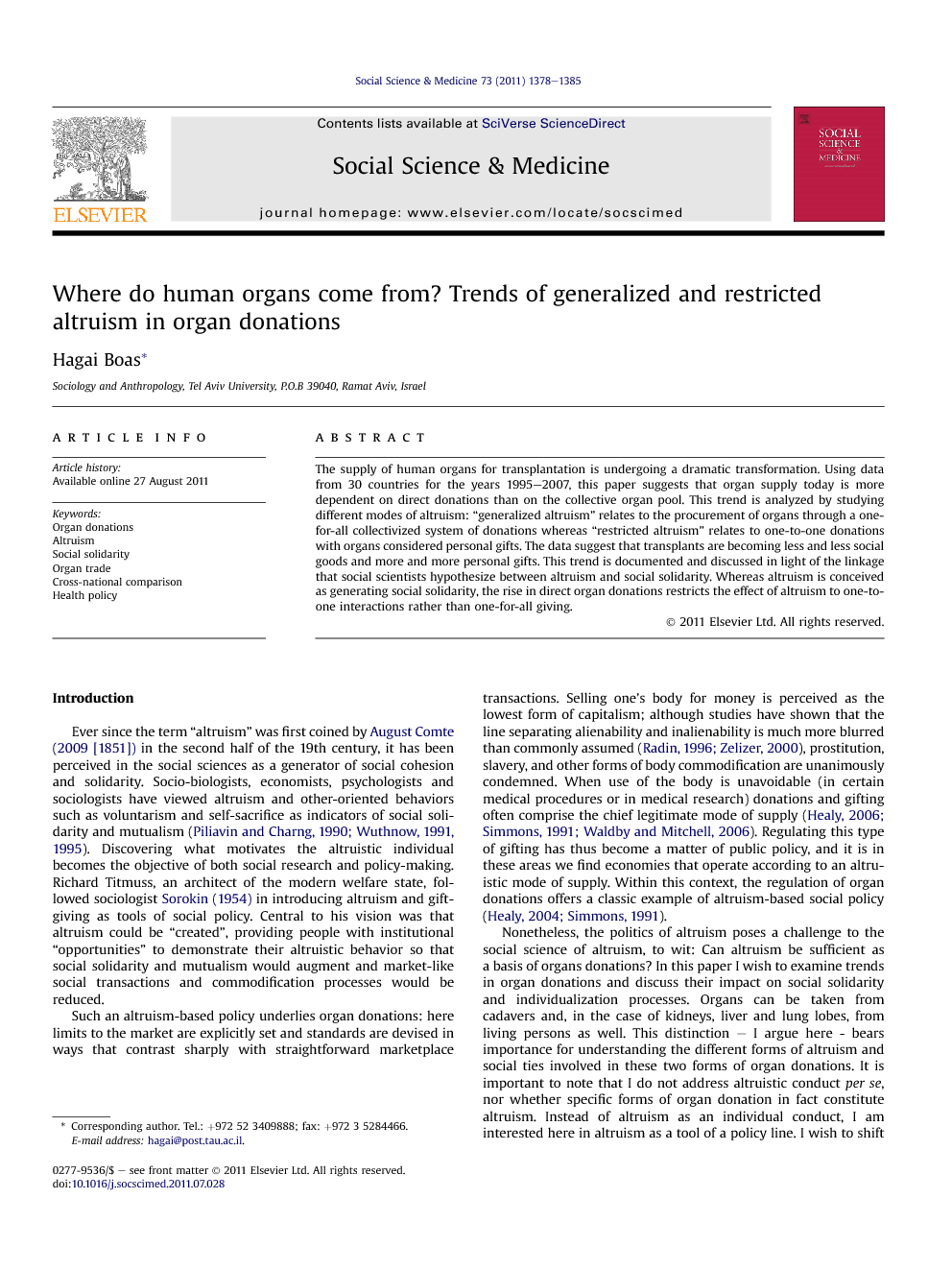 The supply of human organs for transplantation is undergoing a dramatic transformation. Using data from 30 countries for the years 1995–2007, this paper suggests that organ supply today is more dependent on direct donations than on the collective organ pool. This trend is analyzed by studying different modes of altruism: “generalized altruism” relates to the procurement of organs through a one-for-all collectivized system of donations whereas “restricted altruism” relates to one-to-one donations with organs considered personal gifts. The data suggest that transplants are becoming less and less social goods and more and more personal gifts. This trend is documented and discussed in light of the linkage that social scientists hypothesize between altruism and social solidarity. Whereas altruism is conceived as generating social solidarity, the rise in direct organ donations restricts the effect of altruism to one-to-one interactions rather than one-for-all giving.

Ever since the term “altruism” was first coined by August Comte (2009 [1851]) in the second half of the 19th century, it has been perceived in the social sciences as a generator of social cohesion and solidarity. Socio-biologists, economists, psychologists and sociologists have viewed altruism and other-oriented behaviors such as voluntarism and self-sacrifice as indicators of social solidarity and mutualism (Piliavin and Charng, 1990, Wuthnow, 1991 and Wuthnow, 1995). Discovering what motivates the altruistic individual becomes the objective of both social research and policy-making. Richard Titmuss, an architect of the modern welfare state, followed sociologist Sorokin (1954) in introducing altruism and gift-giving as tools of social policy. Central to his vision was that altruism could be “created”, providing people with institutional “opportunities” to demonstrate their altruistic behavior so that social solidarity and mutualism would augment and market-like social transactions and commodification processes would be reduced. Such an altruism-based policy underlies organ donations: here limits to the market are explicitly set and standards are devised in ways that contrast sharply with straightforward marketplace transactions. Selling one’s body for money is perceived as the lowest form of capitalism; although studies have shown that the line separating alienability and inalienability is much more blurred than commonly assumed (Radin, 1996 and Zelizer, 2000), prostitution, slavery, and other forms of body commodification are unanimously condemned. When use of the body is unavoidable (in certain medical procedures or in medical research) donations and gifting often comprise the chief legitimate mode of supply (Healy, 2006, Simmons, 1991 and Waldby and Mitchell, 2006). Regulating this type of gifting has thus become a matter of public policy, and it is in these areas we find economies that operate according to an altruistic mode of supply. Within this context, the regulation of organ donations offers a classic example of altruism-based social policy (Healy, 2004 and Simmons, 1991). Nonetheless, the politics of altruism poses a challenge to the social science of altruism, to wit: Can altruism be sufficient as a basis of organs donations? In this paper I wish to examine trends in organ donations and discuss their impact on social solidarity and individualization processes. Organs can be taken from cadavers and, in the case of kidneys, liver and lung lobes, from living persons as well. This distinction – I argue here - bears importance for understanding the different forms of altruism and social ties involved in these two forms of organ donations. It is important to note that I do not address altruistic conduct per se, nor whether specific forms of organ donation in fact constitute altruism. Instead of altruism as an individual conduct, I am interested here in altruism as a tool of a policy line. I wish to shift the focus on altruism from social psychology to an institutional analysis. Taking Healy, 2000 and Healy, 2004 perspective on altruism and organ donations, I approach altruism as an institutionalized structure, a regulated form of conduct, a ready-made concept of organ procurement organizations. Instead of examining whether living donations are more altruistic or less altruistic than post-mortem donations, I am interested in the societal outcomes of these two types of donations. In other words, I wish to test the thesis promoted by Sorokin, 1954 and Titmuss, 1997 that altruism can be induced to the degree that it would first foster social solidarity and second serve as a buffer against commodification processes.

The data provided here suggest rethinking the linkage between altruism, organ donations and social solidarity. Whereas generalized altruism uses organ donations to foster solidarity and then uses it as a resource for future organ sharing, restricted altruism remains to a large extent a personal story. The implications of the data, nonetheless, are much further reaching. It is possible to contend that the shift from generalized to restricted altruism is the first step toward organ trading. There might be a slippery slope from the individualized, one-to-one altruism of direct organ donations to the individualized utilitarian approach that underlies organ trading. Accounts of organ trafficking convey a picture of coercion and exploitation of both donor and recipients (Cohen, 2001, Cohen, 2003, Scheper-Hughes, 2000 and Scheper-Hughes, 2004). It is estimated by the World Health Organization that 5 to 10 percents of kidney transplants performed annually around the world are the result of organ trafficking (Budiani-Saberi and Delmonico, 2008 and Epstein, 2008). Most of trafficked organs are taken from living persons, falsely presented as LURD or even as kin-members. Thus, direct donations can become the backdoor of organ trading using “fictive relatedness” (Jacob, 2009) in order to launder trafficking. Organ trafficking, nonetheless, is the end-point in the privatization of organ supply depicted here. This study offers then an outlook of privatization processes before they reach the end-point of organ trafficking. It breaks with the often too simplistic dichotomy of altruism-monetization, suggesting that even when legitimized as altruistic, trends of privatization can be traced in the format of direct organ donations. Whether direct donations feature altruism or not is discussed in different studies (Crouch and Elliot, 1999, Siegler and Lantos, 1999 and Steinberg, 2004). The focus here is on the social outcomes of organ donations rather than on their causes. Indirect donations are devised in the spirit of the Titmuss model which aims not only at fostering solidarity but to serve as a buffer against atomization processes. Direct donations are a break with these social premises. Restricted to the donor-recipient dyad, direct donations are more vulnerable and exposed to the monetization of organs and presumably to different sets of intra-familial power-relations that may evade the inspecting eye of transplant coordinators. This is not to say that direct donations are inevitably a form of coercion or a softer version of utilitarian organ transfer. Nonetheless, tracing trends of direct organ donations provides a good quantitative indicator to a move away from generalized altruism (with the exception of China where high incidence of cadaveric transplants indicates State-run market of organs (Matas and Kilgour 2005)). Whereas reports on organ trafficking remain local, and relatively small-scaled, using incidence of direct donations is a step toward a more complex outlook on altruism and utilitarianism in the supply of organs for transplantations. The shift toward direct donations is not universal in all countries. Furthermore, the data suggest that the majority of organs for transplantations is still retrieved from indirect donations. Yet the rising trends of direct organ donations may be of concern since they are traced within the core of developed countries where generalized altruism is fostered and promoted and if the mighty are succumbing to processes of individualization how shall the weak emerge unscathed?