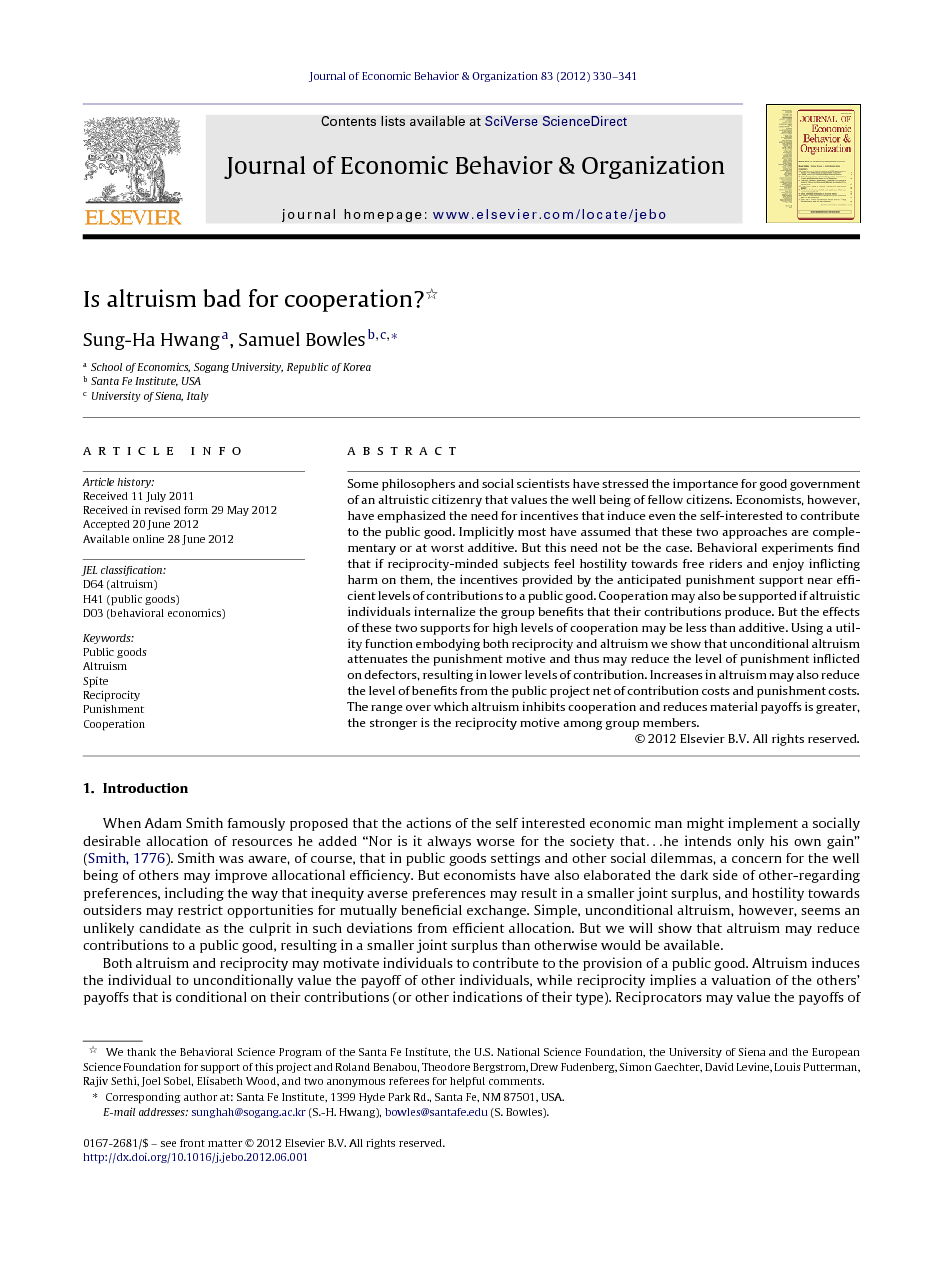 Some philosophers and social scientists have stressed the importance for good government of an altruistic citizenry that values the well being of fellow citizens. Economists, however, have emphasized the need for incentives that induce even the self-interested to contribute to the public good. Implicitly most have assumed that these two approaches are complementary or at worst additive. But this need not be the case. Behavioral experiments find that if reciprocity-minded subjects feel hostility towards free riders and enjoy inflicting harm on them, the incentives provided by the anticipated punishment support near efficient levels of contributions to a public good. Cooperation may also be supported if altruistic individuals internalize the group benefits that their contributions produce. But the effects of these two supports for high levels of cooperation may be less than additive. Using a utility function embodying both reciprocity and altruism we show that unconditional altruism attenuates the punishment motive and thus may reduce the level of punishment inflicted on defectors, resulting in lower levels of contribution. Increases in altruism may also reduce the level of benefits from the public project net of contribution costs and punishment costs. The range over which altruism inhibits cooperation and reduces material payoffs is greater, the stronger is the reciprocity motive among group members.

Some philosophers and social scientists have stressed the importance for good government of an altruistic citizenry that values the well-being of fellow citizens (Mill, 1861, Rawls, 1971, Schumpeter, 1950 and Almond and Verba, 1963). Economists, however, have emphasized the need for incentives that induce even the self-interested to contribute to the public good. Implicitly most have assumed that these two approaches are complementary or at worst additive. It is now recognized that this assumption may fail where the presence of monetary or other explicit incentives reduces the salience of altruistic or other public-spirited motives (Benabou and Tirole, 2003, Benabou and Tirole, 2006, Bowles, 2008, Falk and Kosfeld, 2006, Sliwka, 2007, Bowles and Hwang, 2008 and Bowles and Polania Reyes, 2012). But as we have seen, the assumption that the effects of incentives and social preferences are at worst additive need not hold even in the absence of such motivational crowding out (namely, where preferences are exogenous, as in the model presented here). Our results suggest that for a community wishing to sustain high levels of cooperation, efforts to enhance unconditional altruism may be counter-productive, and that enhancing the level of citizen reciprocity may exacerbate the negative effects of altruism. Other social preferences, however, may be synergistic with reciprocity. For example, inequality aversion as proposed by Fehr and Schmidt (1999) can enhance the motivation to punish those who make relatively high payoffs by free riding on the cooperation of others. This mechanism differs from ours in that the punisher is seeking to rectify an unfair outcome, while in our model the reciprocator wishes to punish the violation of a social norm. But punishment is often (as in our model) resource-using; costs are imposed both on the target and the punisher. Unless or until levels of contribution sufficient to make punishment rare are achieved, the costs associated with punishment of low contributors may more than offset the gains to cooperation that the punishment allows (Herrmann et al., 2008 and Gaechter et al., 2008). This is particularly true in a case we have not considered, namely when vendetta-like cycles of punishment and counter punishment occur (Hopfensitz and Reuben, 2009 and Nikiforakis and Engelmann, 2011). Nonetheless, cooperation sustained by a combination of altruism and reciprocity-based punishment may be welfare enhancing. This is true in part because punishment is not only an incentive; it is also a signal. The incentive-based response to punishment may be enhanced by the feelings of shame that punishment by peers triggers (Bowles and Gintis, 2005). In part for this reason, disapproval by peers may induce members to contribute even when it is expressed in non-resource-using ways such as gossip, ridicule or the simple statement that the individual has violated a norm (Masclet et al., 2003, Barr, 2001 and Wiessner, 2005).