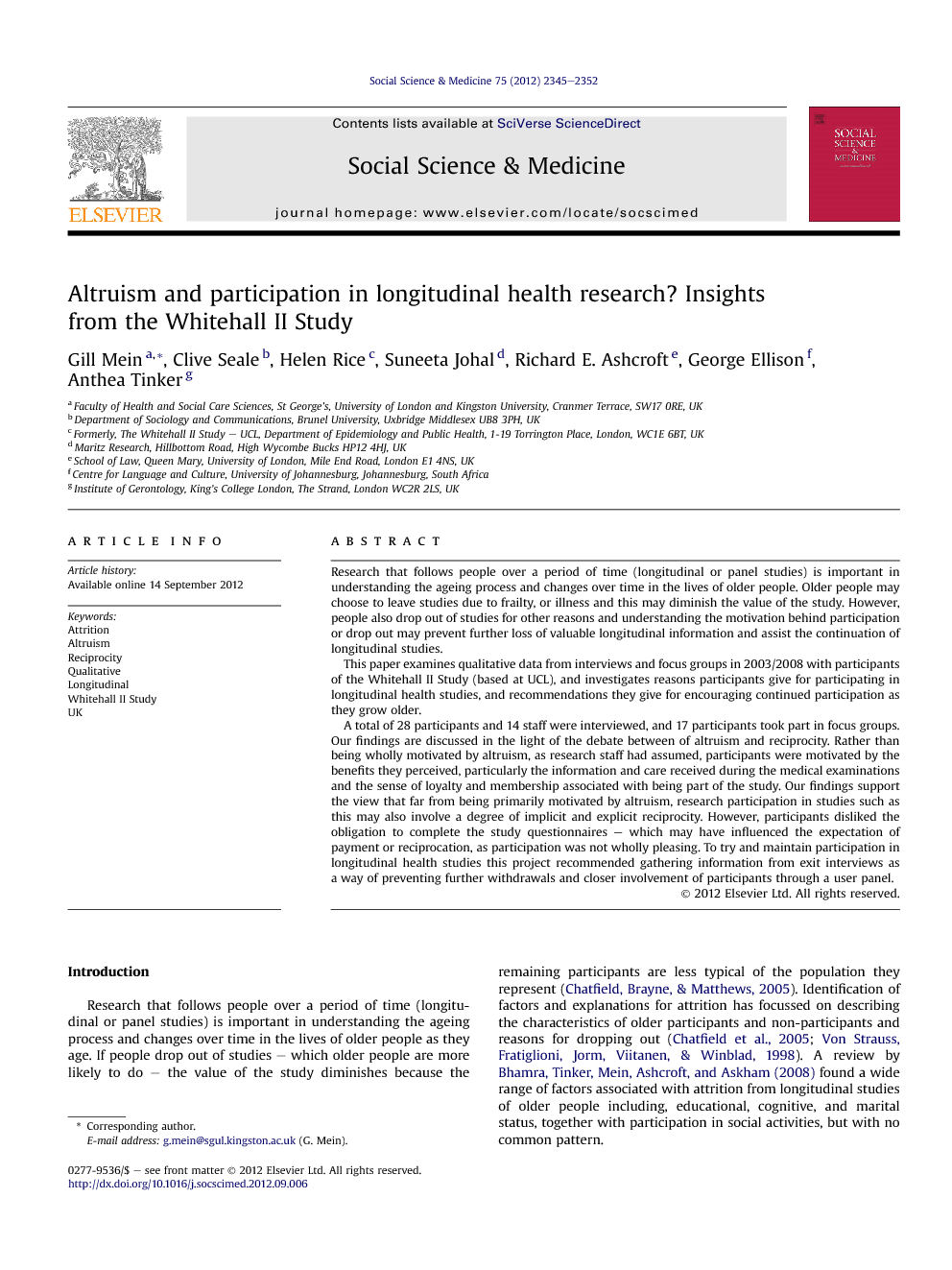 Research that follows people over a period of time (longitudinal or panel studies) is important in understanding the ageing process and changes over time in the lives of older people. Older people may choose to leave studies due to frailty, or illness and this may diminish the value of the study. However, people also drop out of studies for other reasons and understanding the motivation behind participation or drop out may prevent further loss of valuable longitudinal information and assist the continuation of longitudinal studies. This paper examines qualitative data from interviews and focus groups in 2003/2008 with participants of the Whitehall II Study (based at UCL), and investigates reasons participants give for participating in longitudinal health studies, and recommendations they give for encouraging continued participation as they grow older. A total of 28 participants and 14 staff were interviewed, and 17 participants took part in focus groups. Our findings are discussed in the light of the debate between of altruism and reciprocity. Rather than being wholly motivated by altruism, as research staff had assumed, participants were motivated by the benefits they perceived, particularly the information and care received during the medical examinations and the sense of loyalty and membership associated with being part of the study. Our findings support the view that far from being primarily motivated by altruism, research participation in studies such as this may also involve a degree of implicit and explicit reciprocity. However, participants disliked the obligation to complete the study questionnaires – which may have influenced the expectation of payment or reciprocation, as participation was not wholly pleasing. To try and maintain participation in longitudinal health studies this project recommended gathering information from exit interviews as a way of preventing further withdrawals and closer involvement of participants through a user panel.

Research that follows people over a period of time (longitudinal or panel studies) is important in understanding the ageing process and changes over time in the lives of older people as they age. If people drop out of studies – which older people are more likely to do – the value of the study diminishes because the remaining participants are less typical of the population they represent (Chatfield, Brayne, & Matthews, 2005). Identification of factors and explanations for attrition has focussed on describing the characteristics of older participants and non-participants and reasons for dropping out (Chatfield et al., 2005; Von Strauss, Fratiglioni, Jorm, Viitanen, & Winblad, 1998). A review by Bhamra, Tinker, Mein, Ashcroft, and Askham (2008) found a wide range of factors associated with attrition from longitudinal studies of older people including, educational, cognitive, and marital status, together with participation in social activities, but with no common pattern. Attrition bias, the perceived benefits of participation in health research and altruism It is common for research staff to be concerned about whether those who participate in studies are significantly different from the population they are there to represent. In longitudinal research, or ‘panel studies’, this problem is magnified because even if the original sample is representative, those who drop out of a study over time are likely to be different from those who remain (Patel, Doku, & Tennakoon, 2003), resulting in a selection bias. Ribisl et al. (1996) reviewed the research into attrition and found this to be dominated by studies providing statistical profiles of dropouts, in an attempt to identify groups at increased risk (for example, older participants (Chatfield et al., 2005)). A systematic review of the literature (Chatfield et al., 2005) suggested researchers should incorporate a rationale for why people participate in panel studies as this will assist in designing appropriate incentives for participation and ensure that studies are acceptable, convenient and rewarding for participants. Felt, Bister, Strassnig, and Wagner (2009) found participation in medical research was reliant upon predetermined information behind informed consent and if people understood that biomedical research is a “public good” they were more likely to participate. For participants to continue to participate they need to feel their effort or time is being rewarded or appreciated. This is often manifested by a feeling of personal benefit or perceived benefit for another party. The benefit of participating in research is not always apparent or tangible, and because of the nature of research, the results of the research at the time of participation are frequently unknown. Scott, Valery, Boyle, and Bain (2002) suggest that balancing the benefits and risks associated with participating in research is not a straightforward matter. To take part in health research, people must give up their time, experience, knowledge and sometimes samples, hence it is reasonable to regard participation as being equivalent to the act of gift-giving, and therefore in some cases altruistic. Gift giving has been the subject of considerable anthropological and sociological study (Mauss, 1954; Titmuss, 1970). Mauss (1954) suggested that the idea of a “pure” unreciprocated gift is not possible; he believed that all gifts are reciprocated in some way. The recipient may be those other than the participant, including family, fellow sufferers of a condition, or an identified group. There is current debate as to whether altruism or true selflessness actually exists. Altruism is said by Badcock (1986) to involve “unconditional and reciprocal acts of giving”, however, the term altruism has been developed to include a number of variations to the original concept. Opinions vary as to whether the term should be used if there is any consideration of personal benefit (McCann, Campbell, & Entwistle, 2010). Batson and Shaw (1991) argued that all acts of supposed altruism involve a degree of reciprocity whereby the giver and the receiver both benefit.

In 1985 when the Whitehall II Study began, it was not planned to be a longitudinal study, and future funding is continually being sought. In 1985 participants did not knowingly agree to participate in a longitudinal study. Participants for this analysis were from a sample of ostensibly cooperative (if not compliant) survivors who had been participating for over 25 years. Our study has raised important questions for longitudinal studies with respect to maintaining participation. Our results found that participants clearly felt they were benefitting from participation, and made suggestions for enhancing these perceived benefits (and reducing perceived burdens) to continued participation. Understanding these experiences and view is important for the collection of additional longitudinal measurements, because it helps understand the motivation behind participation, retention and potential selection bias at enrolment and loss to follow- up. A previous paper identified associations between those who withdraw from studies and those who remain. But this paper examined the reasons participants gave for continuing to participate. We found that participants in biomedical research can experience what they feel to be tangible health-related benefits from medical examinations, even when clinically-qualified staff should not provide detailed feedback or health advice. Indeed, far from participating for purely altruistic reasons (as research staff assumed), participants had different reasons within the context of the study's medical examination – both as consumers of health information and, as loyal members of a study they viewed as meaningful, important and prestigious. In this context perhaps the most applicable label is that of “conditional altruism” which encourages people to participate because others will benefit, participation is still conditional on personal benefit as well (McCann et al., 2010). The Whitehall II Study has given this analysis the benefit of approaching participants who have been participating for over 25 years, and an opportunity for other longitudinal studies to learn from these findings. Longitudinal studies would benefit from exit interviews with participants who leave the study and exploring the role of a “participant user panel” to obtain views from participants as to how retention in longitudinal studies could be maintained. Our results highlight for other longitudinal studies the importance of addressing retention of participants as they age. Strategies to maintain participation should be included in original study designs, particularly wherever participants can be told that the study will be longitudinal from the outset.