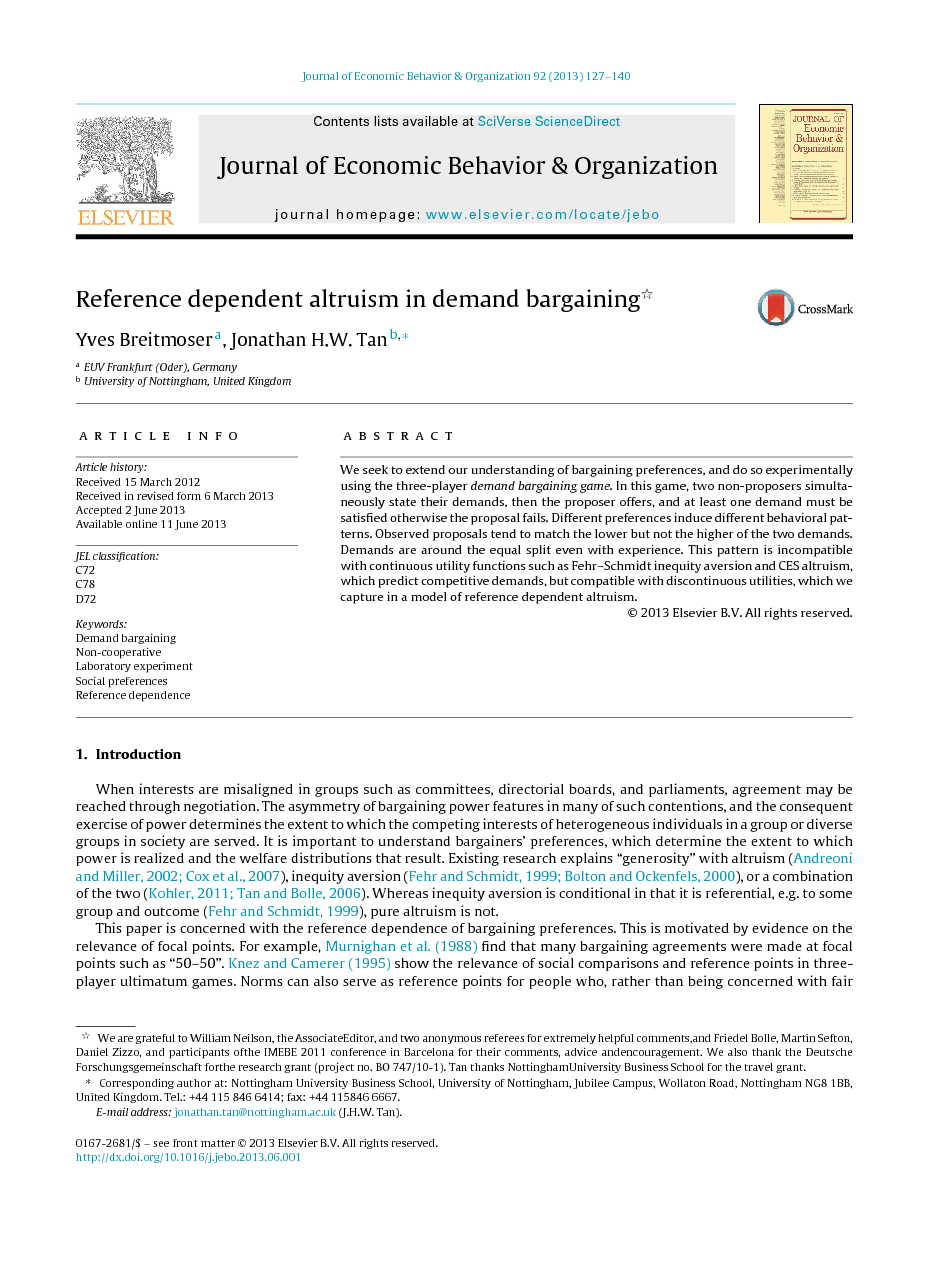 We seek to extend our understanding of bargaining preferences, and do so experimentally using the three-player demand bargaining game. In this game, two non-proposers simultaneously state their demands, then the proposer offers, and at least one demand must be satisfied otherwise the proposal fails. Different preferences induce different behavioral patterns. Observed proposals tend to match the lower but not the higher of the two demands. Demands are around the equal split even with experience. This pattern is incompatible with continuous utility functions such as Fehr–Schmidt inequity aversion and CES altruism, which predict competitive demands, but compatible with discontinuous utilities, which we capture in a model of reference dependent altruism.

When interests are misaligned in groups such as committees, directorial boards, and parliaments, agreement may be reached through negotiation. The asymmetry of bargaining power features in many of such contentions, and the consequent exercise of power determines the extent to which the competing interests of heterogeneous individuals in a group or diverse groups in society are served. It is important to understand bargainers’ preferences, which determine the extent to which power is realized and the welfare distributions that result. Existing research explains “generosity” with altruism (Andreoni and Miller, 2002 and Cox et al., 2007), inequity aversion (Fehr and Schmidt, 1999 and Bolton and Ockenfels, 2000), or a combination of the two (Kohler, 2011 and Tan and Bolle, 2006). Whereas inequity aversion is conditional in that it is referential, e.g. to some group and outcome (Fehr and Schmidt, 1999), pure altruism is not. This paper is concerned with the reference dependence of bargaining preferences. This is motivated by evidence on the relevance of focal points. For example, Murnighan et al. (1988) find that many bargaining agreements were made at focal points such as “50–50”. Knez and Camerer (1995) show the relevance of social comparisons and reference points in three-player ultimatum games. Norms can also serve as reference points for people who, rather than being concerned with fair distributions per se, want to appear fair to observers (Dana et al., 2006, Dana et al., 2007, Andreoni and Bernheim, 2009 and Bicchieri and Chavez, 2010). The concept of reference dependence is appealing both in individual choice and in strategic choice settings. Prospect Theory (Kahneman and Tversky, 1979) is an influential explanation of decisions in the face of risk, and it has inspired concepts such as loss aversion equilibrium (Shalev, 2000 and Shalev, 2002), reference dependent equilibrium (Kőszegi and Rabin, 2006 and Kőszegi and Rabin, 2007), and personal equilibrium (Kőszegi, 2010). Fehr–Schmidt inequity aversion, which describes conditional altruism and spite (“guilt” and “envy”) around a reference point, organizes behavior in many games including ultimatum bargaining (Güth et al., 1982). Butler (2007) theoretically relates behavior in ultimatum bargaining with outside options to Prospect theoretic utilities. Neilson (2006) formally shows that Prospect Theory and inequity aversion are special cases of a general form of reference dependence.1 Our paper adds to this effort by ascertaining the reference dependence of bargaining preferences and then analyzing how utility is shaped around the reference point. We ask if utilities are kinked at the reference point as described in Fehr–Schmidt inequity aversion, S-shaped as described in Prospect Theory, or discontinuous (i.e. jumping at the reference point) as we shall describe in the model of reference dependent altruism. This cannot be identified clearly in standard dictator and ultimatum games, for which both continuous and discontinuous models organize behavior similarly. In majority bargaining (e.g. in parliaments), however, continuous utility yields asymmetric outcomes, in contrast to discontinuous utility which leads to more equitable outcomes. Thus, we use a three player majority bargaining game for identification purposes.2 Our experimental game is an adaptation of the demand commitment game of Vidal-Puga (2004) and Breitmoser (2009).3 In this demand bargaining game, two parties simultaneously make demands for their respective surplus shares. The proposer is then informed of the competing demands, after which he proposes how to share the surplus. Proposals are implemented if they satisfy at least one demand, otherwise the game is replayed with roles randomly assigned anew. A payoff maximizing proposer satisfies only the lower of the two demands and offers the more demanding player nothing. This fuels a race to the bottom in which non-proposers (“demanders”) competitively undercut each other until demands are equal or close to zero. In this way, public demand commitments confer the bargaining power to the proposer. This result holds, e.g. with social preferences, as long as utility functions are continuous, but if utility is discontinuous there and the jump is large enough then players will not undercut the reference point. 4 In our experiment, we observe that non-proposers do not reduce demands below their “fair share”, which is the ex ante expected payoff induced in this game and serves as reference point, and that proposers strategically satisfy the lower of two demands, but also give non-strategically to the other party. Observed behavior is compatible with our proposed model of “reference dependent altruism” (RDA), which modifies models of inequity aversion such as the one by Fehr and Schmidt (1999) and constitutes a model of social preferences with reference dependent altruism weights. In its simplest form, one's utility is ui = xi + α xj if xi ≥ x* and ui = xi + β xj otherwise, where xi, xj are payoffs and x* is the reference point. Thus, α ≥ 0 > β induces the jump discontinuity at the reference point which explains behavior in demand bargaining. Notably, RDA is also compatible with pro-social choice in various related contexts such as dictator games, as dictators have xi ≥ x* and thus the altruistic branch α ≥ 0 is active, ultimatum proposals (where again xi ≥ x* and thus α ≥ 0 is active) and ultimatum responses, where typically xi < x* and thus spite β < 0 sets in. Section 2 defines and analyzes the game theoretically under various assumptions on preferences, such as inequity aversion, non-linear altruism, and reference dependent altruism. Section 3 describes experimental design and logistics. Section 4 presents the results. Section 5 discusses and concludes.