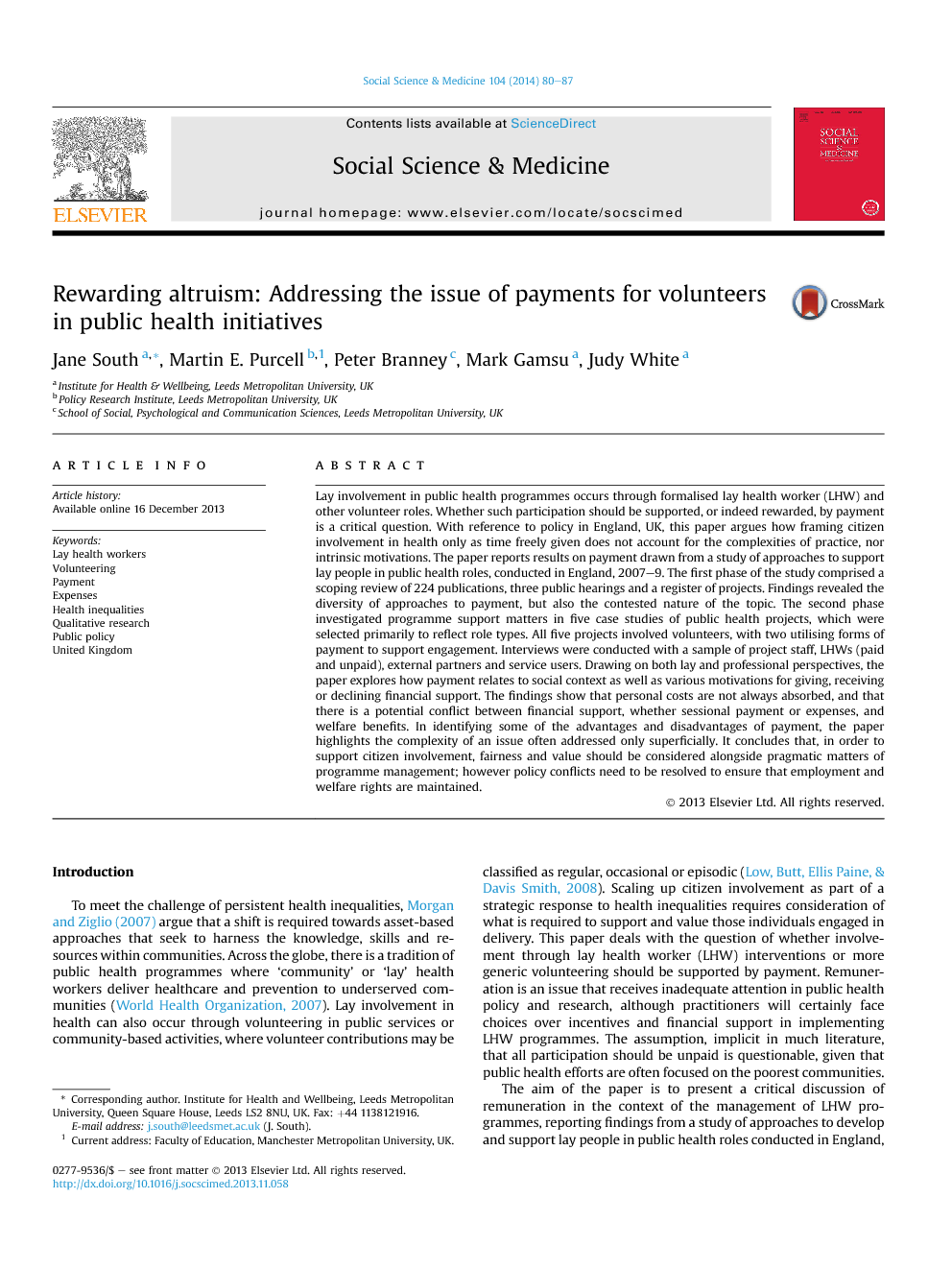 Lay involvement in public health programmes occurs through formalised lay health worker (LHW) and other volunteer roles. Whether such participation should be supported, or indeed rewarded, by payment is a critical question. With reference to policy in England, UK, this paper argues how framing citizen involvement in health only as time freely given does not account for the complexities of practice, nor intrinsic motivations. The paper reports results on payment drawn from a study of approaches to support lay people in public health roles, conducted in England, 2007–9. The first phase of the study comprised a scoping review of 224 publications, three public hearings and a register of projects. Findings revealed the diversity of approaches to payment, but also the contested nature of the topic. The second phase investigated programme support matters in five case studies of public health projects, which were selected primarily to reflect role types. All five projects involved volunteers, with two utilising forms of payment to support engagement. Interviews were conducted with a sample of project staff, LHWs (paid and unpaid), external partners and service users. Drawing on both lay and professional perspectives, the paper explores how payment relates to social context as well as various motivations for giving, receiving or declining financial support. The findings show that personal costs are not always absorbed, and that there is a potential conflict between financial support, whether sessional payment or expenses, and welfare benefits. In identifying some of the advantages and disadvantages of payment, the paper highlights the complexity of an issue often addressed only superficially. It concludes that, in order to support citizen involvement, fairness and value should be considered alongside pragmatic matters of programme management; however policy conflicts need to be resolved to ensure that employment and welfare rights are maintained.

To meet the challenge of persistent health inequalities, Morgan and Ziglio (2007) argue that a shift is required towards asset-based approaches that seek to harness the knowledge, skills and resources within communities. Across the globe, there is a tradition of public health programmes where ‘community’ or ‘lay’ health workers deliver healthcare and prevention to underserved communities (World Health Organization, 2007). Lay involvement in health can also occur through volunteering in public services or community-based activities, where volunteer contributions may be classified as regular, occasional or episodic (Low, Butt, Ellis Paine, & Davis Smith, 2008). Scaling up citizen involvement as part of a strategic response to health inequalities requires consideration of what is required to support and value those individuals engaged in delivery. This paper deals with the question of whether involvement through lay health worker (LHW) interventions or more generic volunteering should be supported by payment. Remuneration is an issue that receives inadequate attention in public health policy and research, although practitioners will certainly face choices over incentives and financial support in implementing LHW programmes. The assumption, implicit in much literature, that all participation should be unpaid is questionable, given that public health efforts are often focused on the poorest communities. The aim of the paper is to present a critical discussion of remuneration in the context of the management of LHW programmes, reporting findings from a study of approaches to develop and support lay people in public health roles conducted in England, UK (South et al., 2010). Assumptions that a simple distinction can be made between payment and volunteering models are undermined by the variety of approaches to providing financial and non-financial benefits that are reported (see Cherrington et al., 2010, Elford et al., 2002, Lam et al., 2003 and Leaman et al., 1997). Any discussion of LHW remuneration, therefore, needs to take account of the diversity of public health practice. Financial support is an important programme management issue and can be used as a mechanism for achieving various objectives such as addressing poverty or incentivising recruitment (Hooker et al., 2007 and Taylor et al., 2001). A World Health Organization review identifies payment as a factor in programme sustainability because most community health workers are poor (World Health Organization, 2007). Boundaries between volunteering and low paid work can be blurred (Baines and Hardill, 2008 and The Commission on the Future of Volunteering, 2008); however in the current economic climate, there are legitimate concerns over replacement of paid jobs with volunteer roles (Taylor, Mathers, Atfield, & Parry, 2011). Recompense for time given does not always have to be in the form of a wage, but when payment is involved, anything other than the proper rate for the job can be considered exploitation. Ultimately payment reflects how society values purposeful occupation. Notwithstanding that volunteering is valued as evidence of reciprocity (Dingle & Heath, 2001), it tends to have lower status than professional activity as there is an implicit assumption that reliability and competence is assured through delivery by paid staff. A further issue for public health arises when individuals from low income communities are asked to contribute their time, knowledge and skills freely to help address health inequalities, yet in a context where their personal and employment opportunities are limited due to the impact of structural inequalities (Whitehead, 2007). In summary, financial support for lay delivery raises fundamental matters of fairness, but at the same time, it remains an inherently practical and highly contextualised issue where approaches evolve within policy frameworks that may constrain or facilitate citizen involvement in health. This paper examines these issues through a study focused on public health practice across England, where questions of volunteering and remuneration have not been sufficiently explored. The following section outlines the relationship between motivation and reward in relation to volunteering, before going on to examine how policy frames these issues in England.