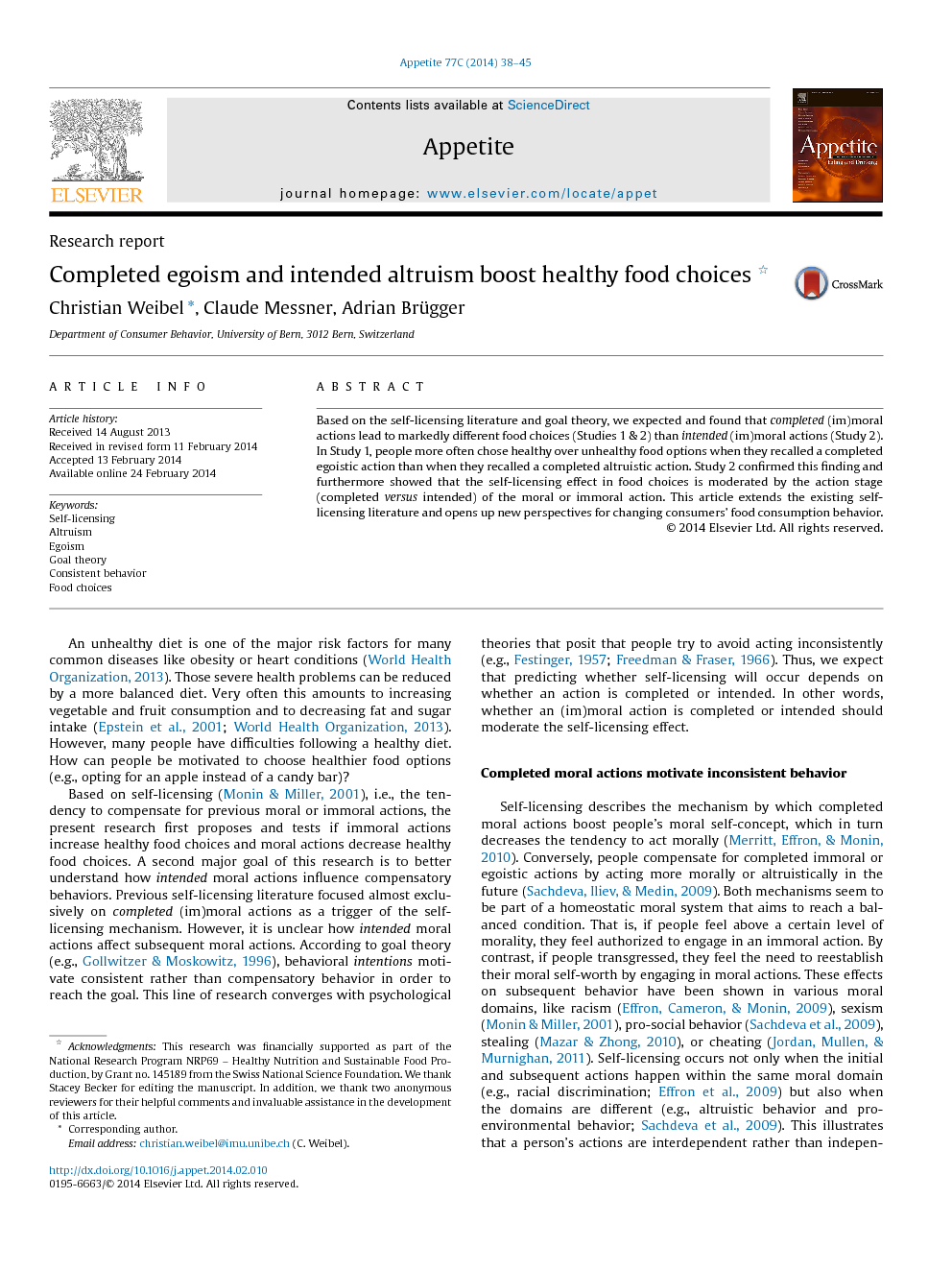 Based on the self-licensing literature and goal theory, we expected and found that completed (im)moral actions lead to markedly different food choices (Studies 1 & 2) than intended (im)moral actions (Study 2). In Study 1, people more often chose healthy over unhealthy food options when they recalled a completed egoistic action than when they recalled a completed altruistic action. Study 2 confirmed this finding and furthermore showed that the self-licensing effect in food choices is moderated by the action stage (completed versus intended) of the moral or immoral action. This article extends the existing self-licensing literature and opens up new perspectives for changing consumers’ food consumption behavior.

An unhealthy diet is one of the major risk factors for many common diseases like obesity or heart conditions (World Health Organization, 2013). Those severe health problems can be reduced by a more balanced diet. Very often this amounts to increasing vegetable and fruit consumption and to decreasing fat and sugar intake (Epstein et al., 2001; World Health Organization, 2013). However, many people have difficulties following a healthy diet. How can people be motivated to choose healthier food options (e.g., opting for an apple instead of a candy bar)? Based on self-licensing (Monin & Miller, 2001), i.e., the tendency to compensate for previous moral or immoral actions, the present research first proposes and tests if immoral actions increase healthy food choices and moral actions decrease healthy food choices. A second major goal of this research is to better understand how intended moral actions influence compensatory behaviors. Previous self-licensing literature focused almost exclusively on completed (im)moral actions as a trigger of the self-licensing mechanism. However, it is unclear how intended moral actions affect subsequent moral actions. According to goal theory (e.g., Gollwitzer & Moskowitz, 1996), behavioral intentions motivate consistent rather than compensatory behavior in order to reach the goal. This line of research converges with psychological theories that posit that people try to avoid acting inconsistently (e.g., Festinger, 1957; Freedman & Fraser, 1966). Thus, we expect that predicting whether self-licensing will occur depends on whether an action is completed or intended. In other words, whether an (im)moral action is completed or intended should moderate the self-licensing effect. Completed moral actions motivate inconsistent behavior Self-licensing describes the mechanism by which completed moral actions boost people’s moral self-concept, which in turn decreases the tendency to act morally (Merritt, Effron, & Monin, 2010). Conversely, people compensate for completed immoral or egoistic actions by acting more morally or altruistically in the future (Sachdeva, Iliev, & Medin, 2009). Both mechanisms seem to be part of a homeostatic moral system that aims to reach a balanced condition. That is, if people feel above a certain level of morality, they feel authorized to engage in an immoral action. By contrast, if people transgressed, they feel the need to reestablish their moral self-worth by engaging in moral actions. These effects on subsequent behavior have been shown in various moral domains, like racism (Effron, Cameron, & Monin, 2009), sexism (Monin & Miller, 2001), pro-social behavior (Sachdeva et al., 2009), stealing (Mazar & Zhong, 2010), or cheating (Jordan, Mullen, & Murnighan, 2011). Self-licensing occurs not only when the initial and subsequent actions happen within the same moral domain (e.g., racial discrimination; Effron et al., 2009) but also when the domains are different (e.g., altruistic behavior and pro-environmental behavior; Sachdeva et al., 2009). This illustrates that a person’s actions are interdependent rather than independent; current actions depend on past decisions, even when the actions do not take place within the same moral domain.