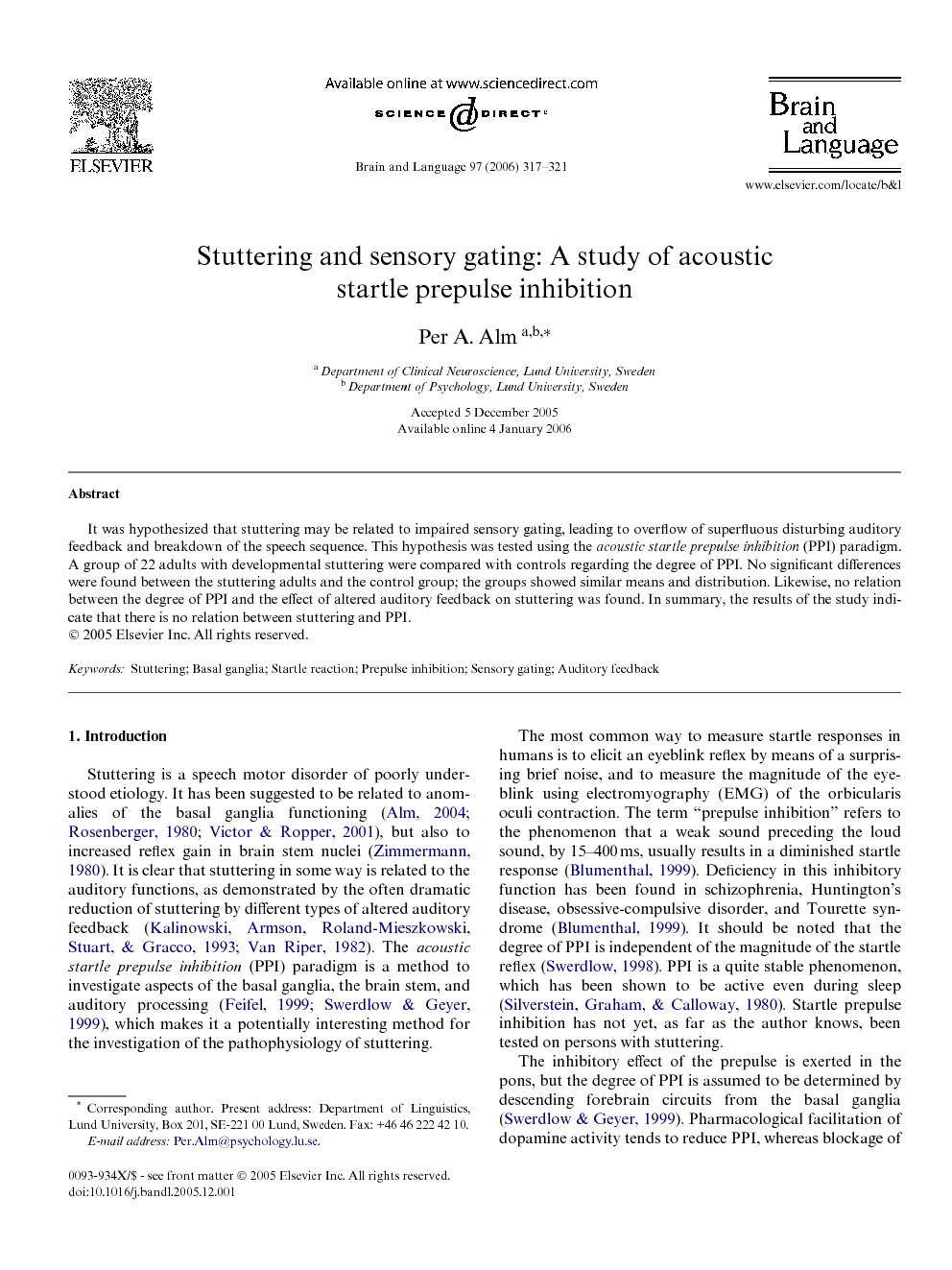 It was hypothesized that stuttering may be related to impaired sensory gating, leading to overflow of superfluous disturbing auditory feedback and breakdown of the speech sequence. This hypothesis was tested using the acoustic startle prepulse inhibition (PPI) paradigm. A group of 22 adults with developmental stuttering were compared with controls regarding the degree of PPI. No significant differences were found between the stuttering adults and the control group; the groups showed similar means and distribution. Likewise, no relation between the degree of PPI and the effect of altered auditory feedback on stuttering was found. In summary, the results of the study indicate that there is no relation between stuttering and PPI.

Stuttering is a speech motor disorder of poorly understood etiology. It has been suggested to be related to anomalies of the basal ganglia functioning (Alm, 2004, Rosenberger, 1980 and Victor and Ropper, 2001), but also to increased reflex gain in brain stem nuclei (Zimmermann, 1980). It is clear that stuttering in some way is related to the auditory functions, as demonstrated by the often dramatic reduction of stuttering by different types of altered auditory feedback (Kalinowski et al., 1993 and Van Riper, 1982). The acoustic startle prepulse inhibition (PPI) paradigm is a method to investigate aspects of the basal ganglia, the brain stem, and auditory processing ( Feifel, 1999 and Swerdlow and Geyer, 1999), which makes it a potentially interesting method for the investigation of the pathophysiology of stuttering. The most common way to measure startle responses in humans is to elicit an eyeblink reflex by means of a surprising brief noise, and to measure the magnitude of the eyeblink using electromyography (EMG) of the orbicularis oculi contraction. The term “prepulse inhibition” refers to the phenomenon that a weak sound preceding the loud sound, by 15–400 ms, usually results in a diminished startle response (Blumenthal, 1999). Deficiency in this inhibitory function has been found in schizophrenia, Huntington’s disease, obsessive-compulsive disorder, and Tourette syndrome (Blumenthal, 1999). It should be noted that the degree of PPI is independent of the magnitude of the startle reflex (Swerdlow, 1998). PPI is a quite stable phenomenon, which has been shown to be active even during sleep (Silverstein, Graham, & Calloway, 1980). Startle prepulse inhibition has not yet, as far as the author knows, been tested on persons with stuttering. The inhibitory effect of the prepulse is exerted in the pons, but the degree of PPI is assumed to be determined by descending forebrain circuits from the basal ganglia (Swerdlow & Geyer, 1999). Pharmacological facilitation of dopamine activity tends to reduce PPI, whereas blockage of dopamine receptor type D2 with antipsychotic medication tends to increase PPI (Swerdlow and Geyer). This is in line with the observations mentioned above, of decreased PPI in schizophrenia and Tourette syndrome, two disorders which are treated with D2 antagonists. The D2 antagonist haloperidol is the medication that has the best documented effect on stuttering (Brady, 1991). Furthermore, there is a report that 45% of persons with Tourette syndrome stuttered as children (Ludlow, 1993). Another link between stuttering and dopamine comes from a brain imaging study using FDOPA-PET (Wu et al., 1997), intended to measure the rate of dopamine synthesis in the brain. The three persons who stuttered showed about three times higher uptake of FDOPA in parts of the basal ganglia compared with the controls. PPI has been interpreted as an expression of sensory gating or perceptual filtering ( Blumenthal, 1999), that is, a function for inhibition of disturbing stimuli. Stuttering tends to be improved when manipulating the auditory feedback, with frequency shift, delay, or masking noise ( Burke, 1969, Kalinowski et al., 1993 and Van Riper, 1982). Van Riper (1982) claimed that he had authenticated a case where an adult male, with severe stuttering since childhood, “immediately stopped stuttering completely after an accident in which he became completely deafened” (pp. 383–384). One hypothesis is that the effect of altered auditory feedback on stuttering is related to an attenuation of the effective auditory feedback. If this is the case, stuttering might result as a consequence of disturbing superfluous auditory feedback due to impaired sensory gating. In summary, several lines of reasoning lead to the possibility of a relation between stuttering and impairment of PPI. The present study is an attempt to investigate if PPI is lower in persons who stutter than in controls, and if low PPI is related to a positive effect of altered auditory feedback in stuttering persons (as a test of the hypothesis that the effect of altered auditory feedback on stuttering is related to impaired sensory gating).