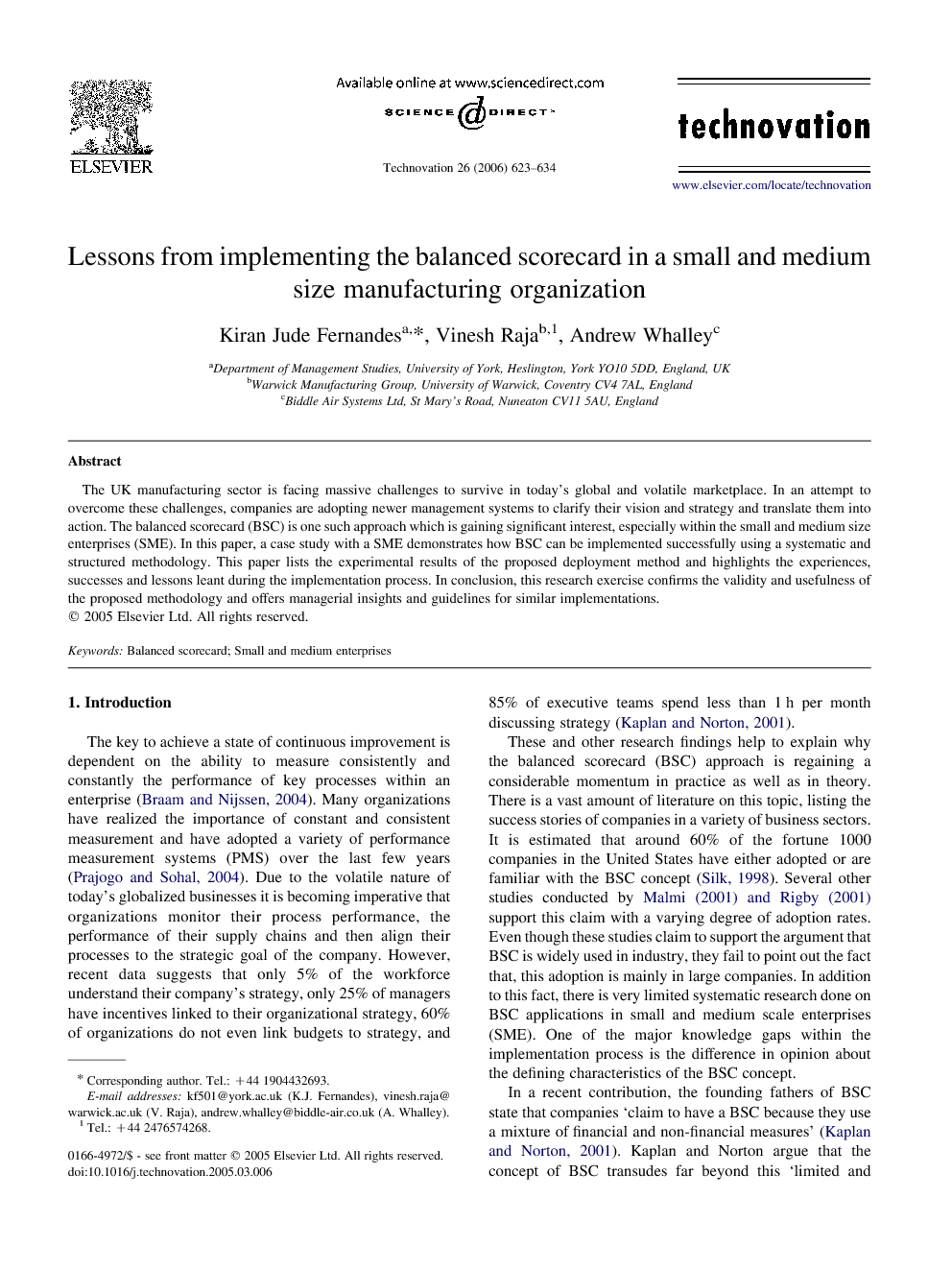 The UK manufacturing sector is facing massive challenges to survive in today's global and volatile marketplace. In an attempt to overcome these challenges, companies are adopting newer management systems to clarify their vision and strategy and translate them into action. The balanced scorecard (BSC) is one such approach which is gaining significant interest, especially within the small and medium size enterprises (SME). In this paper, a case study with a SME demonstrates how BSC can be implemented successfully using a systematic and structured methodology. This paper lists the experimental results of the proposed deployment method and highlights the experiences, successes and lessons leant during the implementation process. In conclusion, this research exercise confirms the validity and usefulness of the proposed methodology and offers managerial insights and guidelines for similar implementations.

The key to achieve a state of continuous improvement is dependent on the ability to measure consistently and constantly the performance of key processes within an enterprise (Braam and Nijssen, 2004). Many organizations have realized the importance of constant and consistent measurement and have adopted a variety of performance measurement systems (PMS) over the last few years (Prajogo and Sohal, 2004). Due to the volatile nature of today's globalized businesses it is becoming imperative that organizations monitor their process performance, the performance of their supply chains and then align their processes to the strategic goal of the company. However, recent data suggests that only 5% of the workforce understand their company's strategy, only 25% of managers have incentives linked to their organizational strategy, 60% of organizations do not even link budgets to strategy, and 85% of executive teams spend less than 1 h per month discussing strategy (Kaplan and Norton, 2001). These and other research findings help to explain why the balanced scorecard (BSC) approach is regaining a considerable momentum in practice as well as in theory. There is a vast amount of literature on this topic, listing the success stories of companies in a variety of business sectors. It is estimated that around 60% of the fortune 1000 companies in the United States have either adopted or are familiar with the BSC concept (Silk, 1998). Several other studies conducted by Malmi, 2001 and Rigby, 2001 support this claim with a varying degree of adoption rates. Even though these studies claim to support the argument that BSC is widely used in industry, they fail to point out the fact that, this adoption is mainly in large companies. In addition to this fact, there is very limited systematic research done on BSC applications in small and medium scale enterprises (SME). One of the major knowledge gaps within the implementation process is the difference in opinion about the defining characteristics of the BSC concept. In a recent contribution, the founding fathers of BSC state that companies ‘claim to have a BSC because they use a mixture of financial and non-financial measures’ (Kaplan and Norton, 2001). Kaplan and Norton argue that the concept of BSC transudes far beyond this ‘limited and narrow’ view. Both researchers emphatically argue that BSC is not a static concept but a dynamic tool aimed to consider spread, content, implementation, applications as well as the individual user's experiences, expected benefits and satisfaction. In their recent book, Kaplan and Norton (2001) have developed a framework for the implementation of the BSC strategy. The balanced scorecard, originally seen by Kaplan and Norton as a measurement tool, is now presented as a means for implementing strategy by creating alignment and focus. The presented approach is extremely detailed and complex. It requires a major commitment and effort from the implementer (company). Though Kaplan and Norton claim that this framework can be adopted by smaller organizations, they offer no practical solution to implement BSC within an SME environment, where limited resource and expertise are a key issue. Tackling this issue, this paper highlights the ambiguity of the BSC concept in the theoretical literature and provides a structured, unbiased and methodological approach to implementing BSC within SMEs using an exemplar from a SME manufacturing organization.

This paper has provided an insight to implementing BSC in a SME. Additionally, it has shown by practice, the applicability of Kaplan and Norton's four view perspective to a SME manufacturer. Many of the findings of this paper regarding BSC implementation have highlighted the need for practicality in general theoretical research. The refrigeration and air-conditioning industry is not alone in experiencing global pressure. Hence, this paper should provide other SMEs a roadmap to implement BSC with some minor adjustments to their specific industry. Undoubtedly, there are several research limitations, which need to be acknowledged, which can be the basis of future research work. The paper aims to adopt a structured methodology as central to the implementation of the BSC. There are several factors within such an implementation process that can address social issues, like quality of working condition, general employee satisfaction, etc. in addition to the ones tacked by the authors. An empirical study can be conducted within the industry to bring up additional interesting issues, which can help further the developed methodology.