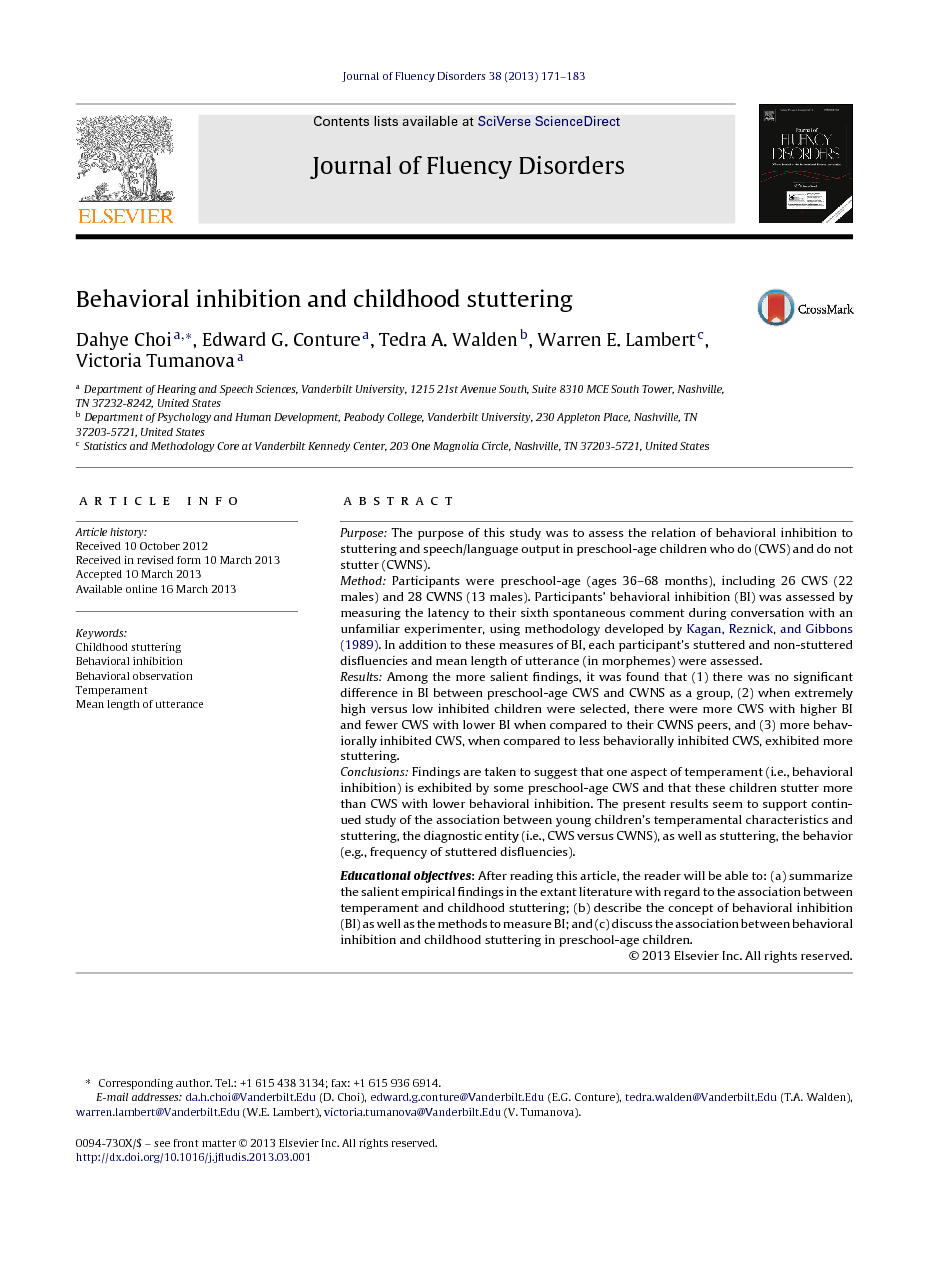 Purpose The purpose of this study was to assess the relation of behavioral inhibition to stuttering and speech/language output in preschool-age children who do (CWS) and do not stutter (CWNS). Method Participants were preschool-age (ages 36–68 months), including 26 CWS (22 males) and 28 CWNS (13 males). Participants’ behavioral inhibition (BI) was assessed by measuring the latency to their sixth spontaneous comment during conversation with an unfamiliar experimenter, using methodology developed by Kagan, Reznick, and Gibbons (1989). In addition to these measures of BI, each participant's stuttered and non-stuttered disfluencies and mean length of utterance (in morphemes) were assessed. Results Among the more salient findings, it was found that (1) there was no significant difference in BI between preschool-age CWS and CWNS as a group, (2) when extremely high versus low inhibited children were selected, there were more CWS with higher BI and fewer CWS with lower BI when compared to their CWNS peers, and (3) more behaviorally inhibited CWS, when compared to less behaviorally inhibited CWS, exhibited more stuttering. Conclusions Findings are taken to suggest that one aspect of temperament (i.e., behavioral inhibition) is exhibited by some preschool-age CWS and that these children stutter more than CWS with lower behavioral inhibition. The present results seem to support continued study of the association between young children's temperamental characteristics and stuttering, the diagnostic entity (i.e., CWS versus CWNS), as well as stuttering, the behavior (e.g., frequency of stuttered disfluencies). Educational objectives: After reading this article, the reader will be able to: (a) summarize the salient empirical findings in the extant literature with regard to the association between temperament and childhood stuttering; (b) describe the concept of behavioral inhibition (BI) as well as the methods to measure BI; and (c) discuss the association between behavioral inhibition and childhood stuttering in preschool-age children.

In summary, preschool-age CWS, when compared to their CWNS peers, are more likely to exhibit extremely high behavioral inhibition and less likely to exhibit extremely low behavioral inhibition. Furthermore, CWS’ behavioral inhibition appears to be associated with higher frequency of stuttered disfluencies. Findings of this study provide further support for recent theories of childhood stuttering (e.g., Conture et al., 2006 and Conture and Walden, 2012) that propose that temperamental characteristics and/or related emotional processes are associated with childhood/developmental stuttering. The present findings are based on direct behavioral observation, a methodology in need of further corroboration through the use of caregiver questionnaires as well as psychophysiological measures of temperamental characteristics. Thus, present results seem to support the continued use of direct behavioral observation to study the association between young children's temperamental characteristics and stuttering, the diagnostic entity (i.e., CWS vs. CWNS), as well as stuttering, the behavior (e.g., frequency of stuttered disfluencies). By triangulating caregiver questionnaire, direct behavioral observation and psychophysiological means for investigating the association between temperament and stuttering, future researchers can improve our understanding of the role, if any, that emotion may play in the onset, development and maintenance of childhood stuttering.