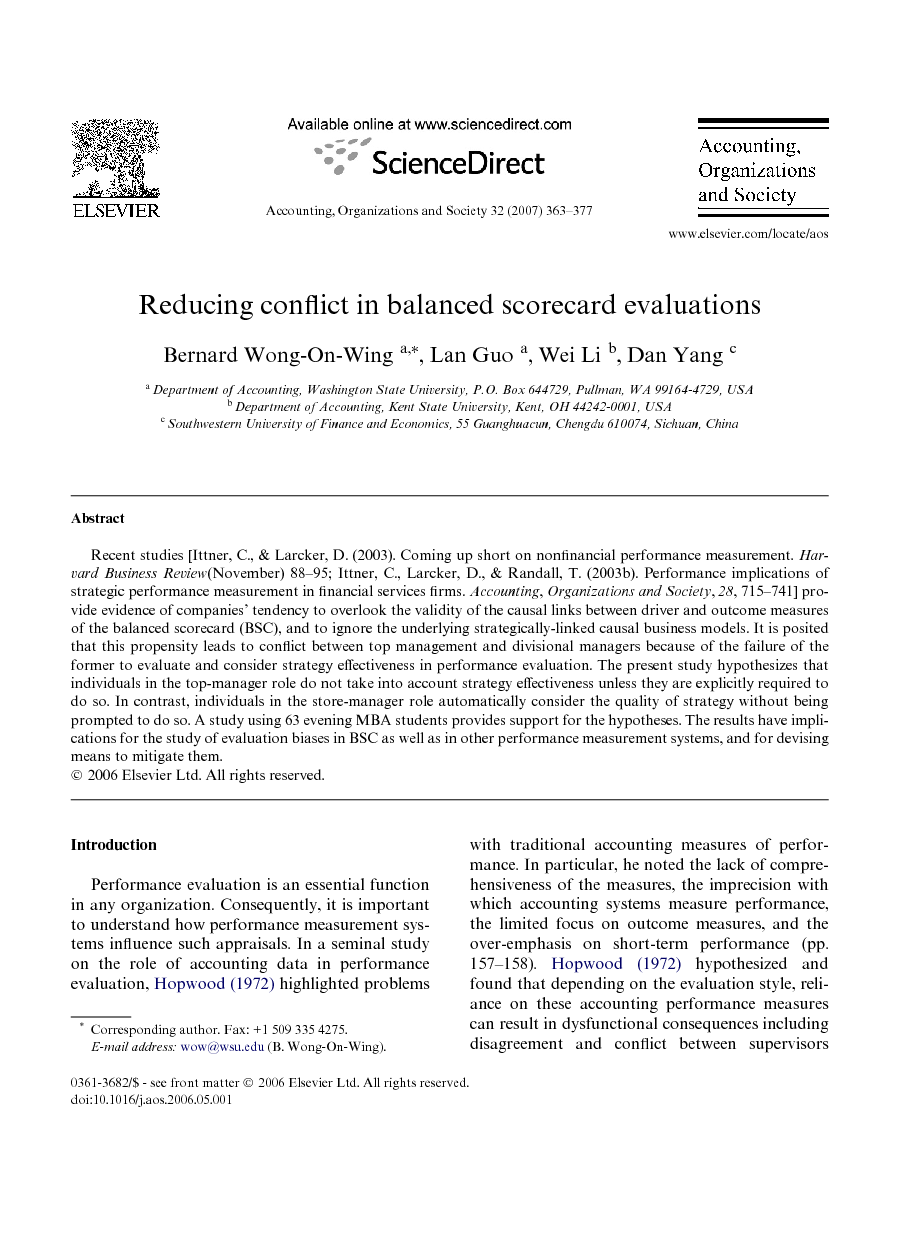 Recent studies [Ittner, C., & Larcker, D. (2003). Coming up short on nonfinancial performance measurement. Harvard Business Review(November) 88–95; Ittner, C., Larcker, D., & Randall, T. (2003b). Performance implications of strategic performance measurement in financial services firms. Accounting, Organizations and Society, 28, 715–741] provide evidence of companies’ tendency to overlook the validity of the causal links between driver and outcome measures of the balanced scorecard (BSC), and to ignore the underlying strategically-linked causal business models. It is posited that this propensity leads to conflict between top management and divisional managers because of the failure of the former to evaluate and consider strategy effectiveness in performance evaluation. The present study hypothesizes that individuals in the top-manager role do not take into account strategy effectiveness unless they are explicitly required to do so. In contrast, individuals in the store-manager role automatically consider the quality of strategy without being prompted to do so. A study using 63 evening MBA students provides support for the hypotheses. The results have implications for the study of evaluation biases in BSC as well as in other performance measurement systems, and for devising means to mitigate them.

Following research (e.g., Lipe and Salterio, 2000 and Lipe and Salterio, 2002) that examines biases in BSC evaluations, the present study explored the role of rater’s selective attention in contributing to conflict between raters and ratees. Specifically, based on research on biases and performance appraisal, the present study investigated (1) the extent to which performance evaluation using the BSC diverges between individuals who assume the role of top management (rater) and those who adopt the role of a store manager (ratee), and (2) the degree to which the difference in BSC performance evaluation is reduced as a result of requiring participants to assess the significance of strategy effectiveness in influencing performance, prior to rating divisional performance. As hypothesized, individuals who assumed the role of top management rated divisional performance lower than those who assumed the role of store managers. This is consistent with the evidence of disagreement in BSC evaluations between top management and divisional managers, gathered from field studies (Ittner et al., 2003a and Malina and Selto, 2001). While this finding is not unlike those observed in other performance evaluation contexts (Atwater et al., 1998, Atwater and Yammarino, 1997, Harris and Schaubroeck, 1988 and Viswesvaran et al., 1996), it is particularly important in the present situation since the comprehensive and strategically linked measures of the BSC are expected to lead to lower rater bias than traditional performance measurement systems that include only financial and outcome measures. Thus, the finding suggests that contrary to expectations, the unique features of the BSC do not significantly reduce selective attention bias that presumably leads to conflict between top management and divisional managers. The predicted effect of increasing top management’s awareness of the importance of strategy effectiveness was also obtained. Specifically, as postulated, individuals who were assigned to the role of top management rated store managers significantly better when they were required to assess the role of strategy quality in determining divisional performance than when they were not. Apparently, without explicit prompting, participants assigned to the role of top management do not automatically consider the strategy. In contrast, among participants who assumed the role of store managers, there was no significant difference in performance ratings between those prompted to assess the role of strategy effectiveness and those who were not. It appears that participants in the store manager role consider the strategy even when they are not explicitly required to do so. As a result of the required assessment, the difference in performance evaluation between participants in the top management and the store manager roles was no longer significant. This pattern of results is consistent with the present study’s conjecture that the observed performance evaluation bias may be due to top management’s failure to attend to the quality of the strategy when appraising divisional managers’ performance. Consistent with the findings of Banker et al. (2004), the Store main effect observed in the current study implies that participants were able to distinguish between strategically linked and non-linked measures, and assigned more weight to the former. Since performance bias is observed in the no assessment condition when participants are able to differentiate between strategically linked and non-linked measures, this evidence suggests that participants’ attention to strategically linked measures is not sufficient to reduce selective attention bias that presumably leads to conflict between top management and divisional managers.