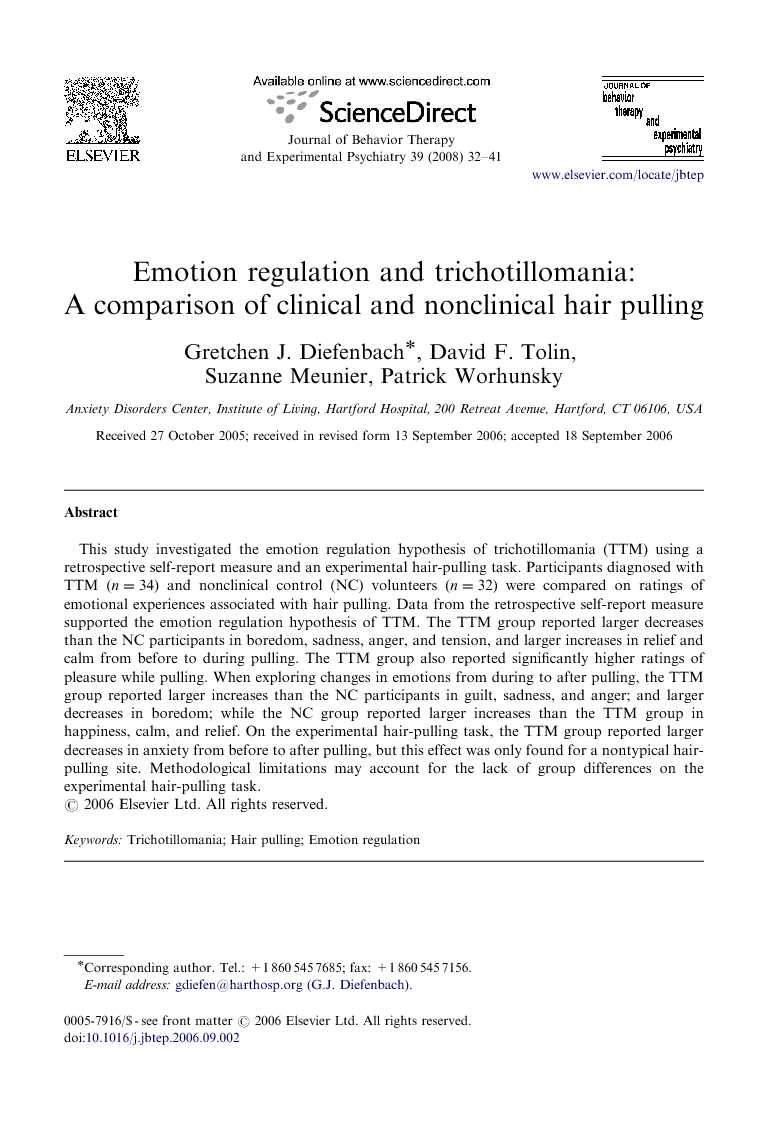 This study investigated the emotion regulation hypothesis of trichotillomania (TTM) using a retrospective self-report measure and an experimental hair-pulling task. Participants diagnosed with TTM (n=34) and nonclinical control (NC) volunteers (n=32) were compared on ratings of emotional experiences associated with hair pulling. Data from the retrospective self-report measure supported the emotion regulation hypothesis of TTM. The TTM group reported larger decreases than the NC participants in boredom, sadness, anger, and tension, and larger increases in relief and calm from before to during pulling. The TTM group also reported significantly higher ratings of pleasure while pulling. When exploring changes in emotions from during to after pulling, the TTM group reported larger increases than the NC participants in guilt, sadness, and anger; and larger decreases in boredom; while the NC group reported larger increases than the TTM group in happiness, calm, and relief. On the experimental hair-pulling task, the TTM group reported larger decreases in anxiety from before to after pulling, but this effect was only found for a nontypical hair-pulling site. Methodological limitations may account for the lack of group differences on the experimental hair-pulling task.

Emotion regulation is a multidimensional construct, which describes the ways in which individuals identify (e.g., attend to, label, and evaluate) and respond to (e.g., express and attempt to change) emotional experiences. Deficits in emotion regulation include, in part, using impulsive and harmful behaviors to modulate emotional intensity (Gratz & Roemer, 2004). The potential role of emotion regulation in the etiology and maintenance of hair pulling has been outlined in theoretical models of trichotillomania (TTM, Franklin, Tolin, & Diefenbach, 2006; Mansueto, Stemberger, Thomas, & Golomb, 1997). Specifically, it is proposed that hair pulling functions, in part, to modulate high-arousal (e.g., anxiety, tension) and low-arousal (e.g., boredom) states (Penzel, 2003). Hair pulling becomes associated with emotion regulation over repeated pulling episodes, which in turn strengthens the behavior over time. Thus, emotions serve as cues for hair pulling urges as a result of classical conditioning, while pulling behaviors are reinforced through operant conditioning resulting from the experience of pleasurable feelings and/or the reduction of unpleasant emotional states after pulling. Clarifying the nature of emotional experiences associated with TTM, and specifically how emotions are regulated by hair pulling, will improve our conceptualization of the disorder, which may in turn inform treatment development. Previous research has supported the proposed emotion regulation function of hair pulling. Situations associated with negative emotions (e.g., anxiety, anger, embarrassment) are common triggers for hair pulling (Christenson, Ristvedt, & MacKenzie, 1993). Research also has examined how emotions change over the course of hair-pulling episodes (before, during, after hair pulling) using the hair-pulling survey (HPS, Stanley, Borden, Mouton, & Breckenridge, 1995), a retrospective self-report measure. In one study using the HPS, university students who reported “nonclinical” hair pulling (i.e., engaged in hair pulling for purposes other than grooming during the previous year) reported decreases in tension, boredom, sadness, and anger from pre- to post-hair pulling (Stanley et al., 1995). In a second study using the HPS, participants diagnosed with TTM reported decreases in boredom and tension, but also reported decreases in anxiety and increases in relief (Diefenbach, Mouton-Odum, & Stanley, 2002). While negative emotional states decreased after pulling for the university sample (Stanley et al., 1995), guilt, sadness, and anger increased after pulling in the clinical sample (Diefenbach et al., 2002). Data from previous research are limited by memory bias given that the ratings were made exclusively using retrospective self-report. These studies also lacked a control group. The goal of the current study was to build upon previous research on emotion regulation and hair pulling by including a control group and collecting data via both self-report and an experimental hair-pulling task. In the current study, the HPS was administered to both a TTM and a nonclinical control (NC) group of age- and gender-matched volunteers without hair-pulling problems. This control group allowed comparisons between TTM hair pulling and pulling for routine grooming (e.g., plucking out gray hairs). The current study is also the first to explore changes in emotional intensity reported during an experimental hair-pulling task. Including an experimental hair-pulling task will improve the internal validity for determining differences in feelings associated with clinical vs. nonclinical hair pulling. It was predicted that the pattern of change for emotional experiences over the course of hair-pulling episodes would differ between groups. Specifically, it was predicted that the TTM group would report a larger decrease than would the NC group in boredom, tension, and anxiety, and a larger increase in relief and calm while pulling. Based on previous research with TTM participants (Diefenbach et al., 2002), it was also predicted that the TTM group would report a larger increase than would the NC group in guilt, sadness, and anger after pulling. Finally, given that individuals with TTM report pulling is pleasurable (Stanley, Swann, Bowers, Davis, & Taylor, 1992) rather than painful (Christenson, MacKenzie, & Mitchell, 1991), it was predicted that the TTM group would report significantly more pleasure and less pain while pulling than would the NC group.