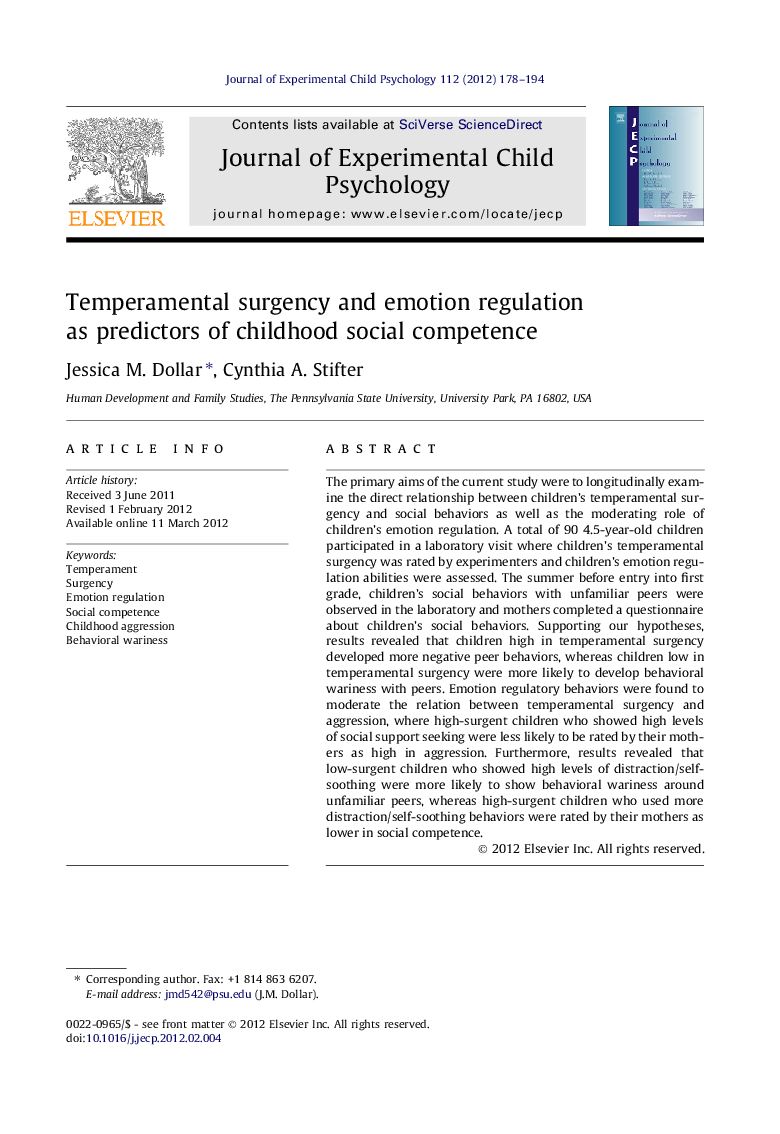 The development of social competence, frequently defined as children’s ability to initiate and maintain effective interactions with their peers (Rubin, Bukowski, & Parker, 2006), is a fundamental task during early childhood and a robust predictor of later mental health as well as social and academic outcomes (e.g., Carlton and Winsler, 1999, Denham and Holt, 1993 and Ladd et al., 1999). Temperament theory and research has proven to be important in identifying the foundation of childhood social competence by showing that variation in children’s temperamental predispositions may influence the processes that support or hinder socially competent behaviors (Eisenberg et al., 2000, Fox et al., 1995 and Rubin et al., 2002). Although various temperament dimensions and types have been investigated for their role in the development of children’s social competence, additional research is needed regarding the development of socially competent behaviors in children varying in their approach to novelty specifically. What little we do know is that although children who are high in approach are very sociable and display high levels of positive affect, they are also at risk for being rejected by their peers (Gunnar, Sebanc, Tout, Donzella, & van Dulmen, 2003) and developing externalizing behaviors, such as aggression and conduct problems (Berdan et al., 2008, Schwartz et al., 1996 and Stifter et al., 2008a), that affect their social competence. On the other hand, children who are low in approach tend to display higher levels of shyness around peers (Kagan, 1999 and Rubin et al., 2002) and lower levels of social competence (Fox et al., 1995), and they are at risk for developing internalizing behaviors (Biederman et al., 1993 and Nilzon and Palmerus, 1998), such as anxiety, that limit their ability to interact effectively with their peers. One mechanism that might explain these outcomes is the development of effective emotion regulation. Due to limits that are frequently placed on their attempts to approach aspects of their environment, children high in approach are more likely to experience high levels of anger/frustration (Derryberry and Reid, 1994, Rothbart and Bates, 2006 and Rothbart et al., 2000). Likewise, children who are low in approach are characterized by high levels of negative reactivity (e.g., Garcia-Coll et al., 1984 and Putnam and Stifter, 2005), which many believe puts them at risk for developing maladaptive behaviors later in childhood. It has been speculated that the pathways by which some children varying in their approach to novelty become socially well adjusted, whereas others develop maladaptive social behaviors, are through their ability to regulate negative emotions (e.g., Coplan et al., 1994, Polak-Toste and Gunnar, 2006, Rubin et al., 1995 and Stifter et al., 2008a). This hypothesis has yet to be fully addressed in the literature and appears to be a promising line of research; thus, the current study aimed to longitudinally examine the contribution of children’s temperamental approach and ability to regulate emotions to children’s social competence.