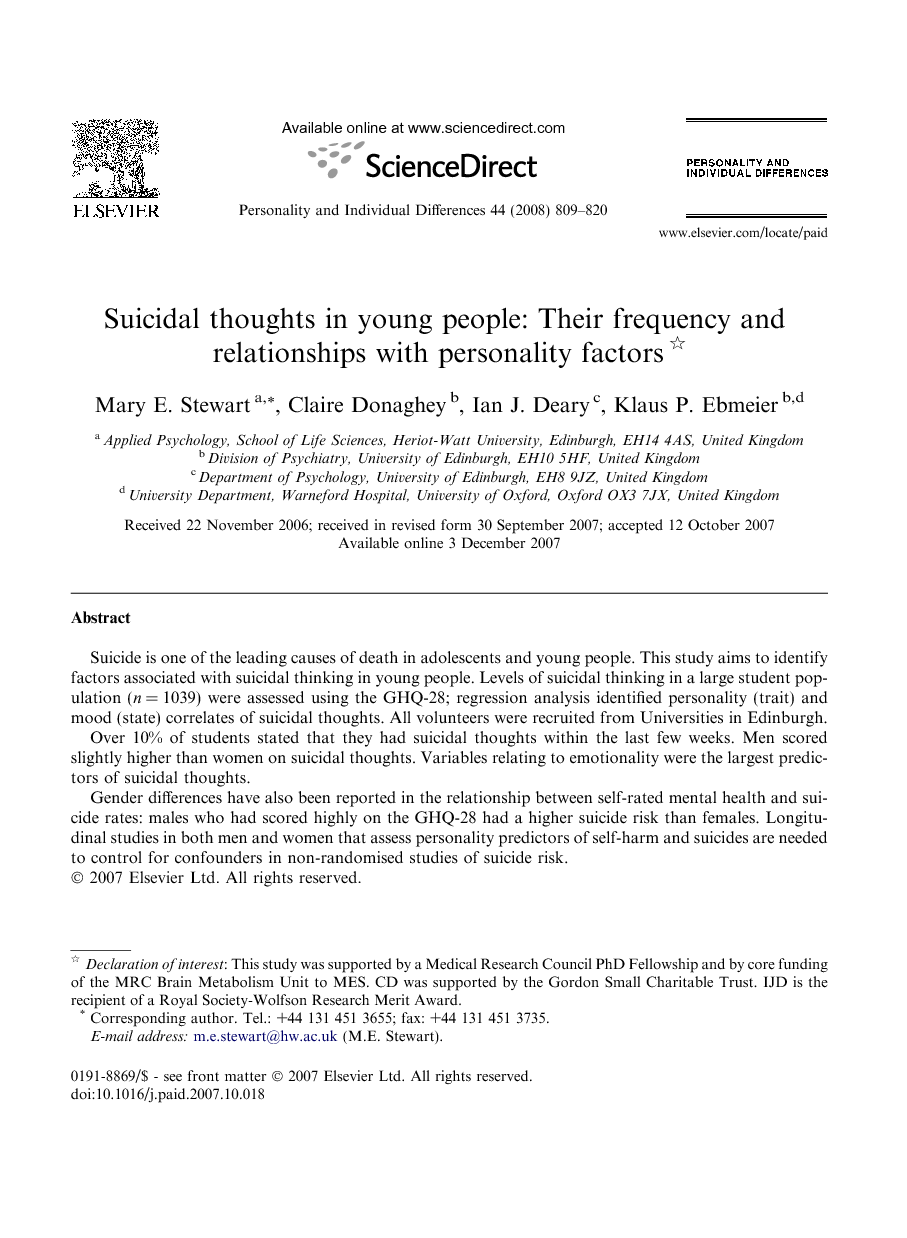 Suicide is one of the leading causes of death in adolescents and young people. This study aims to identify factors associated with suicidal thinking in young people. Levels of suicidal thinking in a large student population (n = 1039) were assessed using the GHQ-28; regression analysis identified personality (trait) and mood (state) correlates of suicidal thoughts. All volunteers were recruited from Universities in Edinburgh. Over 10% of students stated that they had suicidal thoughts within the last few weeks. Men scored slightly higher than women on suicidal thoughts. Variables relating to emotionality were the largest predictors of suicidal thoughts. Gender differences have also been reported in the relationship between self-rated mental health and suicide rates: males who had scored highly on the GHQ-28 had a higher suicide risk than females. Longitudinal studies in both men and women that assess personality predictors of self-harm and suicides are needed to control for confounders in non-randomised studies of suicide risk.

Over the last decade, there has been concern about rising suicide rates in young people, particularly in young men (Gunnell et al., 2003). Although this trend seems to be levelling off, both in the UK and the US (Brent, 2004 and Gunnell and Ashby, 2004) suicide remains one of the leading causes of death in adolescents and young people (Gunnell et al., 2003). There are fundamental differences, not least in frequency and sex distribution, between suicide, suicidal acts, such as self-harm or overdoses, and suicidal thoughts or thinking. Associations between previous measures of general mental health, including suicidal thinking, on one hand and completed suicide on the other have been demonstrated, particularly in men, perhaps less so in women (Gunnell et al., 2002). Understanding factors which may predispose an individual to suicidal thoughts is an important topic. Recent review both by the American Food and Drug Administration and the UK Medicines and Healthcare Products Regulatory Agency (MHRA, 2004) has implicated selective serotonin reuptake inhibitors in a rise in emergent suicidal thoughts and self-harm particularly in young people (Gunnell, Ho, & Murray, 2004). There are naturally few randomised controlled studies that could shed light on this effect; most of the evidence comes from case control studies. Unlike randomised studies, case control studies are sensitive to unknown confounders. Personality traits have been suggested as predisposing factors in suicidal behaviours (including completed suicides, suicide attempts and suicidal ideation) (Brezo et al., 2006, Brezo et al., 2006, Conner et al., 2004, Nordstrom et al., 1996, Roy, 2002 and Velting, 1999). In a recent review Brezo, Paris, and Turecki (2006) find that hopelessness, neuroticism and extraversion are related to suicidal ideation, suicide attempts and suicide completions. However, they suggest that other aspects of personality need to be investigated further. Studies to date have tended to use single measures to assess relationships between suicidal ideation and personality. Correlates of suicidal thinking, such as personality and mood, need to be investigated, so that comparison groups can be stratified and controlled accordingly. This study attempts to identify personality and other psychometric correlates of self-reported suicidal thinking in a large number of young people using multiple measures assessing both trait and state factors. Knowledge of such correlates will allow for a better control of confounders and afford better comparisons among studies. This will allow more valid conclusions about the effects of different interventions to be drawn.