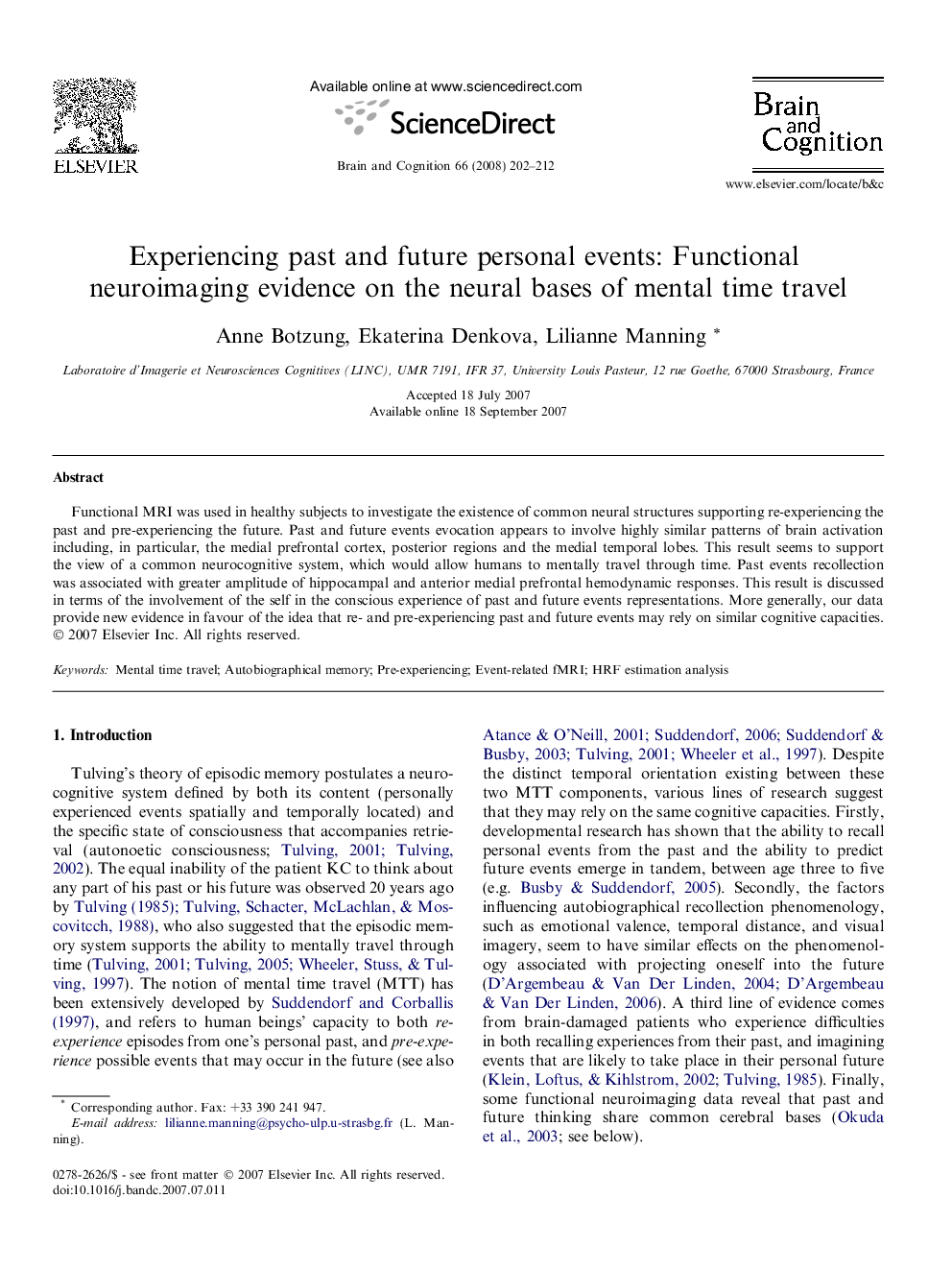 Functional MRI was used in healthy subjects to investigate the existence of common neural structures supporting re-experiencing the past and pre-experiencing the future. Past and future events evocation appears to involve highly similar patterns of brain activation including, in particular, the medial prefrontal cortex, posterior regions and the medial temporal lobes. This result seems to support the view of a common neurocognitive system, which would allow humans to mentally travel through time. Past events recollection was associated with greater amplitude of hippocampal and anterior medial prefrontal hemodynamic responses. This result is discussed in terms of the involvement of the self in the conscious experience of past and future events representations. More generally, our data provide new evidence in favour of the idea that re- and pre-experiencing past and future events may rely on similar cognitive capacities.

Tulving’s theory of episodic memory postulates a neurocognitive system defined by both its content (personally experienced events spatially and temporally located) and the specific state of consciousness that accompanies retrieval (autonoetic consciousness; Tulving, 2001 and Tulving, 2002). The equal inability of the patient KC to think about any part of his past or his future was observed 20 years ago by Tulving, 1985 and Tulving et al., 1988, who also suggested that the episodic memory system supports the ability to mentally travel through time (Tulving, 2001, Tulving, 2005 and Wheeler et al., 1997). The notion of mental time travel (MTT) has been extensively developed by Suddendorf and Corballis (1997), and refers to human beings’ capacity to both re-experience episodes from one’s personal past, and pre-experience possible events that may occur in the future (see also Atance and O’Neill, 2001, Suddendorf, 2006, Suddendorf and Busby, 2003, Tulving, 2001 and Wheeler et al., 1997). Despite the distinct temporal orientation existing between these two MTT components, various lines of research suggest that they may rely on the same cognitive capacities. Firstly, developmental research has shown that the ability to recall personal events from the past and the ability to predict future events emerge in tandem, between age three to five (e.g. Busby & Suddendorf, 2005). Secondly, the factors influencing autobiographical recollection phenomenology, such as emotional valence, temporal distance, and visual imagery, seem to have similar effects on the phenomenology associated with projecting oneself into the future ( D’Argembeau and Van Der Linden, 2004 and D’Argembeau and Van Der Linden, 2006). A third line of evidence comes from brain-damaged patients who experience difficulties in both recalling experiences from their past, and imagining events that are likely to take place in their personal future ( Klein et al., 2002 and Tulving, 1985). Finally, some functional neuroimaging data reveal that past and future thinking share common cerebral bases ( Okuda et al., 2003; see below).

Our data provide new evidence favouring the existence of a common neurocognitive system that enables humans to re- and pre-experience events. From a neuroanatomical point of view, the conscious experience of both past and future events would need the joint contribution of the medial temporal and the medial prefrontal structures. From an information-processing standpoint, this would be possible thanks to both the integration of the episodes we have experienced in the past into the process of envisaging our future, and the involvement of a similar set of basic cognitive capacities.