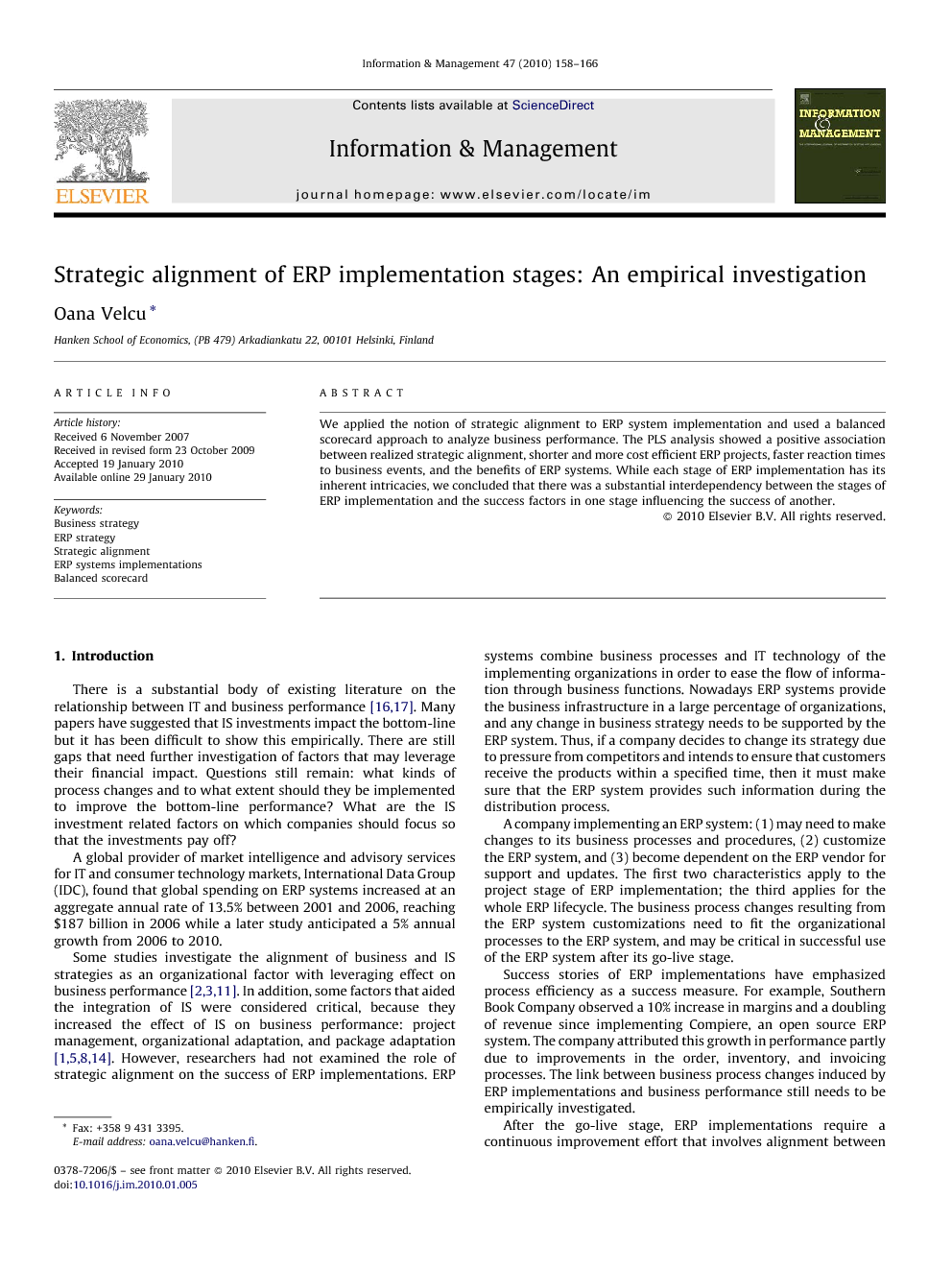 We applied the notion of strategic alignment to ERP system implementation and used a balanced scorecard approach to analyze business performance. The PLS analysis showed a positive association between realized strategic alignment, shorter and more cost efficient ERP projects, faster reaction times to business events, and the benefits of ERP systems. While each stage of ERP implementation has its inherent intricacies, we concluded that there was a substantial interdependency between the stages of ERP implementation and the success factors in one stage influencing the success of another.

There is a substantial body of existing literature on the relationship between IT and business performance [16] and [17]. Many papers have suggested that IS investments impact the bottom-line but it has been difficult to show this empirically. There are still gaps that need further investigation of factors that may leverage their financial impact. Questions still remain: what kinds of process changes and to what extent should they be implemented to improve the bottom-line performance? What are the IS investment related factors on which companies should focus so that the investments pay off? A global provider of market intelligence and advisory services for IT and consumer technology markets, International Data Group (IDC), found that global spending on ERP systems increased at an aggregate annual rate of 13.5% between 2001 and 2006, reaching $187 billion in 2006 while a later study anticipated a 5% annual growth from 2006 to 2010. Some studies investigate the alignment of business and IS strategies as an organizational factor with leveraging effect on business performance [2], [3] and [11]. In addition, some factors that aided the integration of IS were considered critical, because they increased the effect of IS on business performance: project management, organizational adaptation, and package adaptation [1], [5], [8] and [14]. However, researchers had not examined the role of strategic alignment on the success of ERP implementations. ERP systems combine business processes and IT technology of the implementing organizations in order to ease the flow of information through business functions. Nowadays ERP systems provide the business infrastructure in a large percentage of organizations, and any change in business strategy needs to be supported by the ERP system. Thus, if a company decides to change its strategy due to pressure from competitors and intends to ensure that customers receive the products within a specified time, then it must make sure that the ERP system provides such information during the distribution process. A company implementing an ERP system: (1) may need to make changes to its business processes and procedures, (2) customize the ERP system, and (3) become dependent on the ERP vendor for support and updates. The first two characteristics apply to the project stage of ERP implementation; the third applies for the whole ERP lifecycle. The business process changes resulting from the ERP system customizations need to fit the organizational processes to the ERP system, and may be critical in successful use of the ERP system after its go-live stage. Success stories of ERP implementations have emphasized process efficiency as a success measure. For example, Southern Book Company observed a 10% increase in margins and a doubling of revenue since implementing Compiere, an open source ERP system. The company attributed this growth in performance partly due to improvements in the order, inventory, and invoicing processes. The link between business process changes induced by ERP implementations and business performance still needs to be empirically investigated. After the go-live stage, ERP implementations require a continuous improvement effort that involves alignment between the latest requirements of the business model and the update/change to the ERP software. While previous papers on ERP implementations have identified proxies to measure the success of the implementation at each stage, there are few empirical analyses of the relationships between these measures. Success at one stage increases the likelihood of successfully managing the ERP system at the following stage; indeed a failure at an early stage may imply failure of the project as a whole. Thus it is worthwhile studying the links between the success measures of each stage of ERP implementation. ERP systems may make an increased contribution to business performance when implementing companies strive for alignment between their strategic needs and the ERP system. Therefore, the aim of our study was to test the interrelations between strategic alignment, the management of ERP implementations, the process changes and the business performance of companies implementing ERP empirically.

We investigated the association between strategic alignment, management of ERP projects, business process changes, and the business performance of ERP systems. The strategic alignment concept was found to have a central role in the Results Model. We focused on the matching form of strategic alignment, testing the degree that business strategies were coordinated with ERP functionalities. Our results showed that the more the ERP system strategy was aligned with the business strategy, the more likely that the ERP project was completed on budget and on time. In the long run, changes in business strategy must be coordinated with those available in the ERP system. The motivation for implementation was found not to be significantly associated with the management of ERP projects. There is another aspect in the motivation of projects: the combination of human and political issues, which result in competing motivations. Our work had the limitation that it did not verify how the motivations of ERP projects were communicated between project stakeholders. According to the comments of one of the reviewers of this paper, a potential explanation for the lack of support for this hypothesis would be the incorrect wording of the items used to measure the constructs motivation and management of ERP projects. However, the formulation of these items was taken from previous research. Our findings show a positive relationship between management perceptions of the success of ERP projects, business process changes, and internal efficiencies in the post-implementation stage. This suggests that managers perceive the ERP projects to be successful when the implementations entail process re-engineering. An interesting finding resides in the lack of support for our hypothesized direct relationship between the management of ERP projects and internal efficiency benefits. Companies may not reap efficiency benefits unless the system is integrated with other internal systems (e.g. CRM, tracking the inventory system, etc.) or with the external systems of customers and suppliers. There are many intricacies that can occur during the implementation that have a negative effect on the process efficiencies in the post-implementation stage. However, due to the length of the survey, we preferred to keep the traditional way of measuring the success of ERP implementations using time and costs. Third, internal efficiency benefits were shown to lead to customer and financial benefits. Considering that these are normally obtained at different stages in the ERP implementation, this shows that organizations need to be aware, at the implementation stage, of the need to identify and measure the appropriate benefits. Respondents had been using their ERP systems for a maximum of 8 years. During this time, the benefits were obtained from automating the business processes and using the ERP systems to improve decision-making at all levels of the organization. Many benefits were not yet observable, such as the changes made to survive in very competitive markets. Without internal efficiency benefits, companies may damage their customer relationships and lose sales. The sooner the ERP system goes live with lower costs, the quicker the benefits will be achieved through implementation, which may provide an early advantage over the competition. Our study was subject to further limitations due to the measurement error in the constructs. The use of perceptual measures of a single respondent from each company may lead to informant bias, thus the results should be interpreted carefully. Although the measurement validity was good, it would have been useful to refine the respective constructs by further developing the underlying items of the constructs.The PLS analysis showed the importance of the role of strategic alignment for the success of ERP implementations and the perceived benefits of ERP.