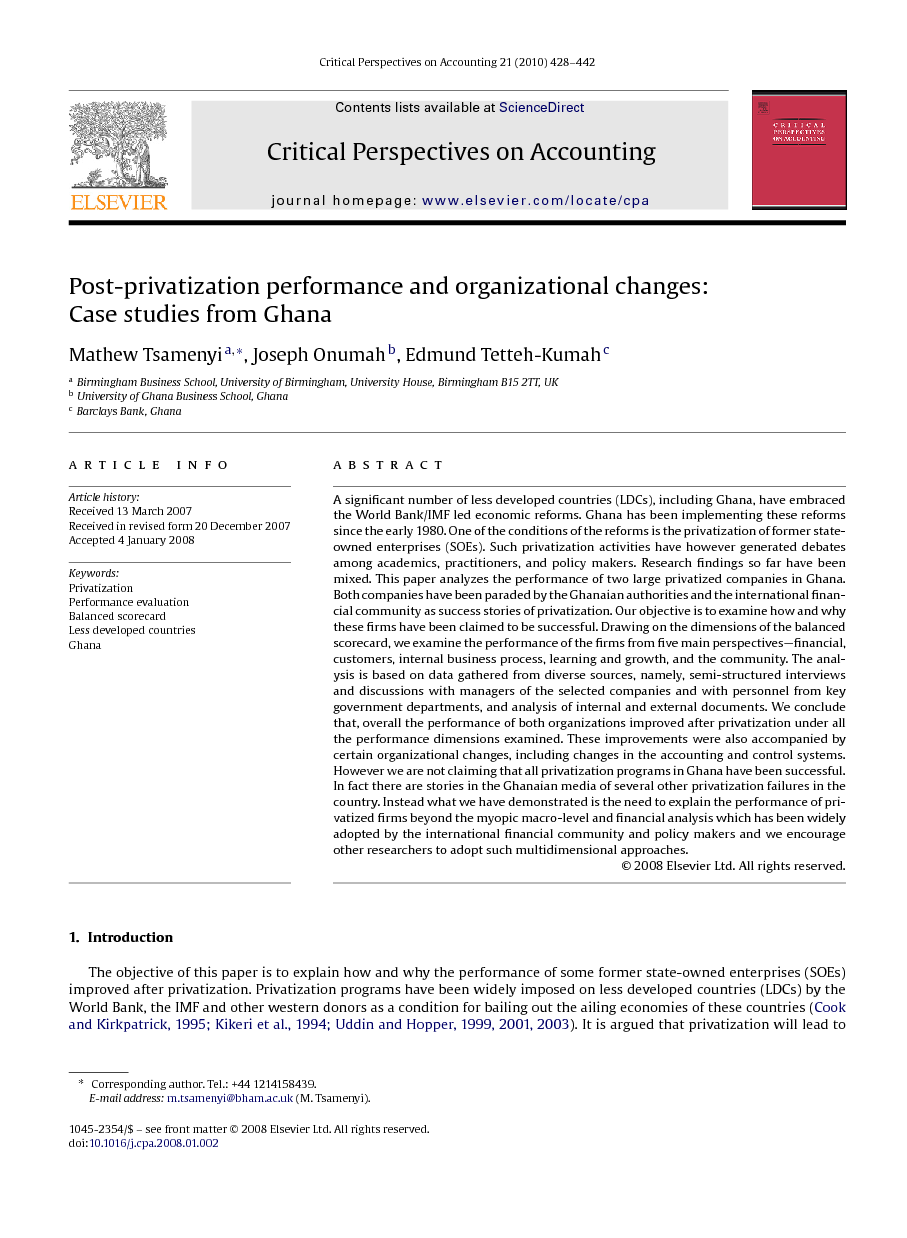 A significant number of less developed countries (LDCs), including Ghana, have embraced the World Bank/IMF led economic reforms. Ghana has been implementing these reforms since the early 1980. One of the conditions of the reforms is the privatization of former state-owned enterprises (SOEs). Such privatization activities have however generated debates among academics, practitioners, and policy makers. Research findings so far have been mixed. This paper analyzes the performance of two large privatized companies in Ghana. Both companies have been paraded by the Ghanaian authorities and the international financial community as success stories of privatization. Our objective is to examine how and why these firms have been claimed to be successful. Drawing on the dimensions of the balanced scorecard, we examine the performance of the firms from five main perspectives—financial, customers, internal business process, learning and growth, and the community. The analysis is based on data gathered from diverse sources, namely, semi-structured interviews and discussions with managers of the selected companies and with personnel from key government departments, and analysis of internal and external documents. We conclude that, overall the performance of both organizations improved after privatization under all the performance dimensions examined. These improvements were also accompanied by certain organizational changes, including changes in the accounting and control systems. However we are not claiming that all privatization programs in Ghana have been successful. In fact there are stories in the Ghanaian media of several other privatization failures in the country. Instead what we have demonstrated is the need to explain the performance of privatized firms beyond the myopic macro-level and financial analysis which has been widely adopted by the international financial community and policy makers and we encourage other researchers to adopt such multidimensional approaches.

The objective of this paper as identified earlier is to analyze the performance of privatized companies using broad based indicators and to examine the organizational changes (including accounting) that occurred after privatization. We argued that traditional measures of performance, which centered mainly on profitability, are unsuitable for today's businesses, since they fail to capture all aspects of performance. Unfortunately the literature on post-privatization performance has been dominated by macro-level financial analysis. Drawing on the balanced scorecard framework, the paper analyzes the performance of two privatized companies in Ghana from five main perspectives—financial, customers, internal business process, learning and growth, and community. The balanced scorecard approach offers a much broader view of performance (Kaplan and Norton, 1992) than the myopic financial view that has dominated the literature. The study therefore addresses a major limitation in the literature by broadening the horizon of post-privatization performance analysis. The evidence we have provided shows that prior to their privatization these firms could not recover their full cost of production. Unlike the example from the UK water industry where there was emphasis on cost containment to the neglect of profitability under state control (Ogden and Anderson, 1999) in our case even cost containment was non-existent. There was no incentive for these companies to neither contain cost nor manage resources efficiently. These enterprises therefore became financial burden on the State. This has been the main reason put forward by the IMF/World Bank and other proponents of privatization to justify the need for Ghana and other LDCs to privatize their ailing state enterprise sector. The evidence we have provided supports the view that performance under state ownership was poor. Apart from the fact that similar to most SOEs these firms faced limited or no competition to strive for greater efficiency, they were also handicapped in attracting long-term capital for investment. There was thus inadequate capital for investment into research and modern plants in both organizations and this affected the ability of the firms to expand. There was support by the interviewees that post-privatization performance has significantly improved in both firms. The organizations were reconstructed and repositioned to give them a new image after privatization. This enabled them to improve efficiency in their service delivery, which has translated into superior financial performance. Since privatization, both firms have been undertaking market surveys on a regular basis. This shapes the focus of their research into the development and improvement of new and existing products/services. Research and development departments have been established by both companies. PC for instance has been perceived by the interviewees to have performed extremely well as far research and development is concerned. This is evident by the number of new products introduced since privatization. Whiles it has been suggested that privatization sometimes lead to decline in the quality of services (Ogden and Anderson, 1999) this was not the case in the firms we examined, where service quality has improved significantly. This was not surprising as these are not in industries which can be considered as essential utilities. It could be argued that these firms operate in industries in which the state shouldn’t have been in the first place. Our study therefore questioned some of the post-colonial policies where governments in LDCs participate in industries which could have been left to the private sector. Though retrenchment of workers is a major concern raised by critics of privatization, we found in our case that there was a significant increase in employment after privatization in both firms. A World Bank study on the impacts of privatization on labor force in Ghana also found that privatization increased employment in some privatized enterprises: In Ghana while there was some loss of jobs in the restructuring prior to privatization, privatized firms in a wide range of sectors increased employment: the Golden Tulip Hotel increased employment from 116 employees before privatization to 306 today; Tema Steel increased from 130 employees (many of whom were not gainfully employed under state ownership to 500 today; Gafco (the food complex) increased employment from 500 employees at the time of privatization to 1,600 today. In many of these cases the employees might not have had any jobs in the absence of privatization (Kikeri, 1998). Our research however has certain limitations. First, we decided to focus our study on only managers who have knowledge of the pre- and post-privatization performance of the company. This requires interviewing managers who were there before privatization and who are still working in the company. Unfortunately this reduced the number of people qualified to be interviewed as most employees that worked under state control had left the companies at the time of our research. The second limitation of the paper is that, the analysis is based on views obtained from only people working in the respective organizations. While we have attempted to corroborate their views with internal and external documentary evidence, a more useful approach would be to obtain the perceptions of people outside the respective organizations such as customers and former employees. Finally, our research is based on only two organizations. Both firms have been paraded by the government as successful cases of privatization. There is no doubt that the choice of the organizations has influenced the results. There are several cases of privatization failures reported in the Ghanaian media. Some of these companies have been liquidated. We were unable to get access to those that we considered unsuccessful and are still in operation at this stage. However this is a future line of research we intend to pursue.