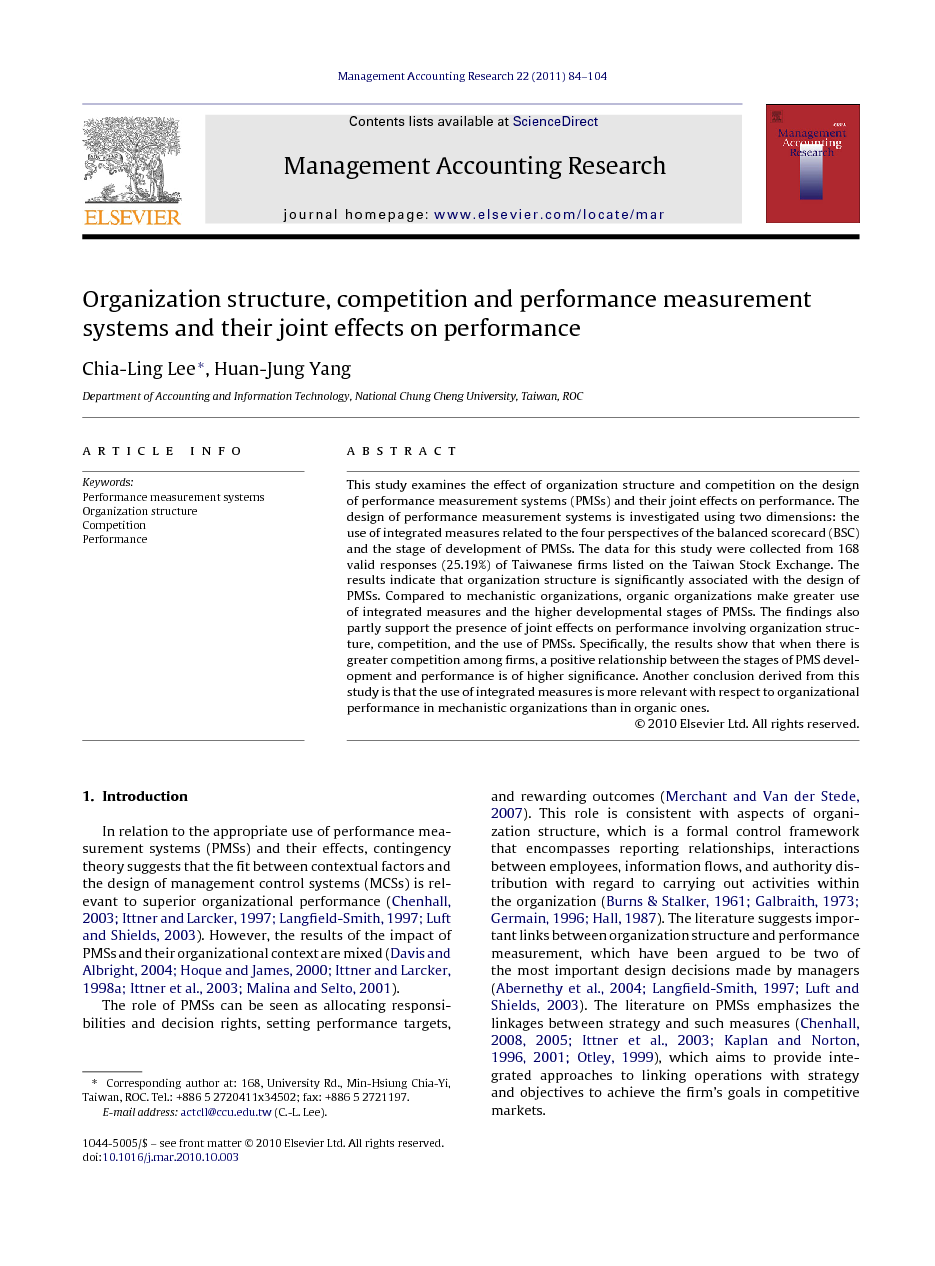 This study examines the effect of organization structure and competition on the design of performance measurement systems (PMSs) and their joint effects on performance. The design of performance measurement systems is investigated using two dimensions: the use of integrated measures related to the four perspectives of the balanced scorecard (BSC) and the stage of development of PMSs. The data for this study were collected from 168 valid responses (25.19%) of Taiwanese firms listed on the Taiwan Stock Exchange. The results indicate that organization structure is significantly associated with the design of PMSs. Compared to mechanistic organizations, organic organizations make greater use of integrated measures and the higher developmental stages of PMSs. The findings also partly support the presence of joint effects on performance involving organization structure, competition, and the use of PMSs. Specifically, the results show that when there is greater competition among firms, a positive relationship between the stages of PMS development and performance is of higher significance. Another conclusion derived from this study is that the use of integrated measures is more relevant with respect to organizational performance in mechanistic organizations than in organic ones.

In relation to the appropriate use of performance measurement systems (PMSs) and their effects, contingency theory suggests that the fit between contextual factors and the design of management control systems (MCSs) is relevant to superior organizational performance (Chenhall, 2003, Ittner and Larcker, 1997, Langfield-Smith, 1997 and Luft and Shields, 2003). However, the results of the impact of PMSs and their organizational context are mixed (Davis and Albright, 2004, Hoque and James, 2000, Ittner and Larcker, 1998a, Ittner et al., 2003 and Malina and Selto, 2001). The role of PMSs can be seen as allocating responsibilities and decision rights, setting performance targets, and rewarding outcomes (Merchant and Van der Stede, 2007). This role is consistent with aspects of organization structure, which is a formal control framework that encompasses reporting relationships, interactions between employees, information flows, and authority distribution with regard to carrying out activities within the organization (Burns and Stalker, 1961, Galbraith, 1973, Germain, 1996 and Hall, 1987). The literature suggests important links between organization structure and performance measurement, which have been argued to be two of the most important design decisions made by managers (Abernethy et al., 2004, Langfield-Smith, 1997 and Luft and Shields, 2003). The literature on PMSs emphasizes the linkages between strategy and such measures (Chenhall, 2008, Chenhall, 2005, Ittner et al., 2003, Kaplan and Norton, 1996, Kaplan and Norton, 2001 and Otley, 1999), which aims to provide integrated approaches to linking operations with strategy and objectives to achieve the firm's goals in competitive markets. It is thus worthwhile to examine how PMSs can provide integrated information for better decision making and communication of strategic goals. This study addresses this issue by seeking to understand how organization structure and competition affect the design of PMSs, and how the contingent relationship of these two variables with such measurement systems affects organizational performance. According to Gerdin and Greve (2004), this study can be classified into two categories, including congruence and contingency type of fit.1 The first research question is to test the congruence of fit, which considers the strength of the relationship between organization structure and the use of integrated measures/PMSs. The second research question tests the contingency form of fit to examine whether the effect of the use of PMSs on performance differs across various levels of context variables, such as organization structures and competition. In line with previous research, this study considers the design of PMSs as having two dimensions. One is the use of integrated performance measures related to the four perspectives of the Balanced Scorecard (BSC). The other is the stages of PMS development. Prior empirical research related to the use of performance measurements has generally considered only a number of financial and nonfinancial performance measures in the organization's PMS or BSC (HassabElnaby et al., 2005, Hoque and James, 2000, Said et al., 2003 and Van der Stede et al., 2006). In contrast, this paper considers the stage of PMS development as manifested in its links to strategy and incentives. In other words, besides a simple count or presence of measures in any or all of the four dimensions of the BSC, this paper also adopts the notion of measurement system linked to strategy and incentives, based on recent calls for viewing a PMS in a “causal model” or “strategy map” context (Kaplan and Norton, 2001 and Ittner and Larcker, 2003). Given the causal links between performance measures, objectives and strategy contained in a PMS, achieving objectives by managers is dependent on the presence of incentives tied to the attainment of these goals (Ittner and Larcker, 2003 and Webb, 2004). PMSs with cause-effect links between strategy, objectives, and incentives that are perceived to be strong will increase the attractiveness of achieving these aims. Considering these features of PMS, we follow Speckbacher et al. (2003) and classify the stage of development of such systems in this study into three types. (1) Minimum-standard PMSs, i.e. those that only contain integrated performance measures in any or all of the four BSC dimensions. (2) Cause-and-effect PMSs, i.e. those that link to strategy by using cause-and-effect relationships. (3) Fully-developed PMSs, i.e. those that contain linkages to strategy and incentives as well as integrated performance measures related to the four perspectives of the BSC and encompassing cause-and-effect relationships between measures and strategy. This study seeks to contribute to the management accounting literature in two main respects. First, it integrates organization structure, competition and the design of PMSs to explore the fit of the MCSs in organizations. In the congruence type of MCS research, the main purpose is to test if the MCS design is associated with context variables (see e.g. Frucot and Shearon, 1991 and Kaplan and Mackey, 1992). This study thus meets previous calls in the literature for attention to be paid to the congruence type of MCS research concerning the relationship between PMS design and the context of organization structure and competition (Abernethy et al., 2004, Berry et al., 2009, Bromwich, 1990, Hoque et al., 2001, Langfield-Smith, 1997 and Luft and Shields, 2003). More specifically, this study examines the effectiveness of the use of PMSs in competitive markets, as well as in different organization structures. This work also meets the need for the contingency type of MCS research to explore the consequences of different MCS designs across different context levels (Abernethy and Lillis, 1995, Bisbe and Otley, 2004 and Brownell and Merchant, 1990). Second, this study extends the literature on the usage of financial and nonfinancial performance measures by considering the linkage of strategies, incentive schemes and performance measurements, as prior research has primarily discussed the effects of the use of nonfinancial measures on performance (e.g., Banker et al., 2000, HassabElnaby et al., 2005, Hoque and James, 2000 and Said et al., 2003). The next section reviews the related literature and develops the research hypotheses. The third section presents the research and survey design. The fourth section presents the empirical results. The fifth section discusses the findings, conclusion and limitations of the study, and suggests directions for future research.