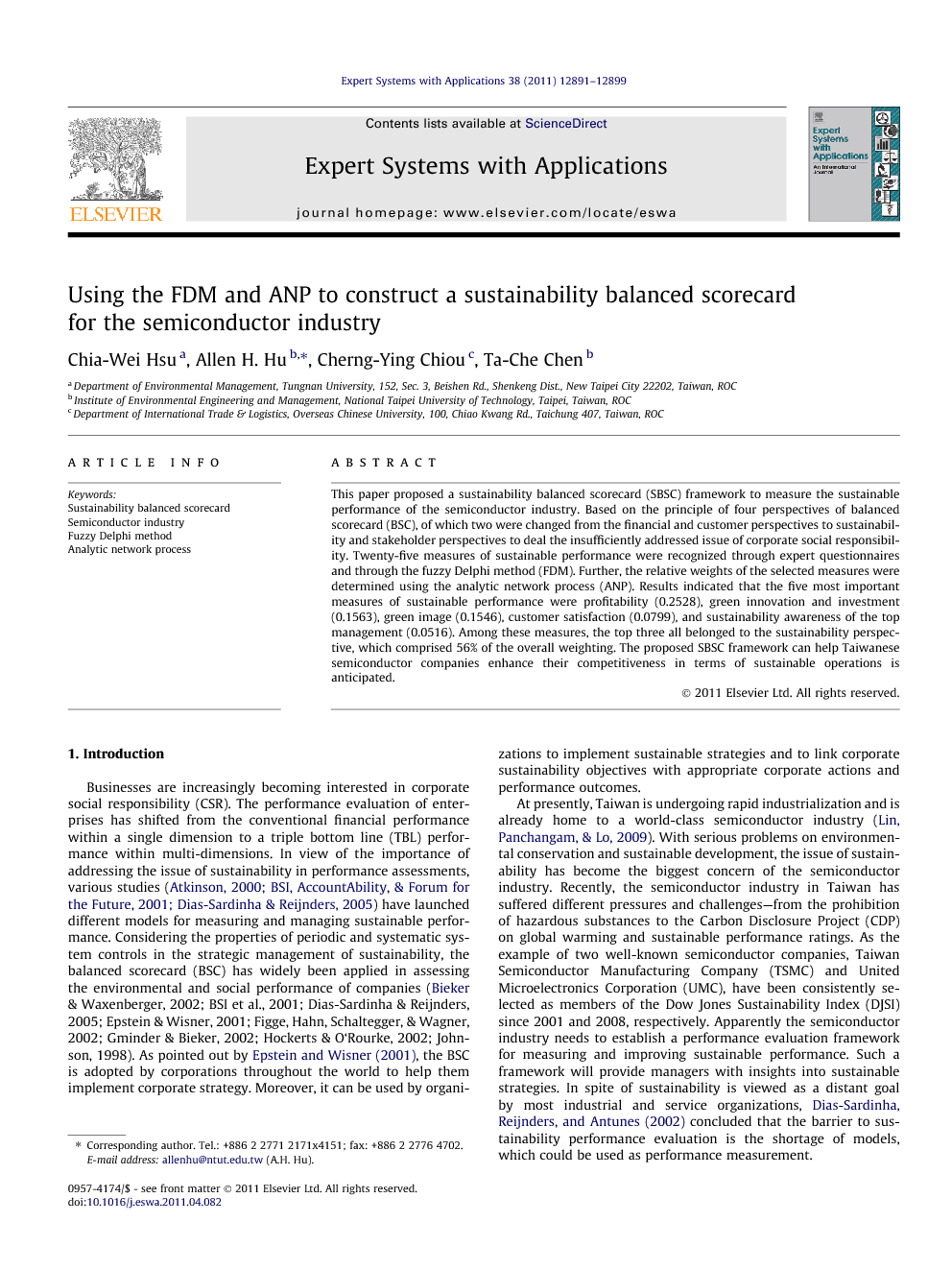 This paper proposed a sustainability balanced scorecard (SBSC) framework to measure the sustainable performance of the semiconductor industry. Based on the principle of four perspectives of balanced scorecard (BSC), of which two were changed from the financial and customer perspectives to sustainability and stakeholder perspectives to deal the insufficiently addressed issue of corporate social responsibility. Twenty-five measures of sustainable performance were recognized through expert questionnaires and through the fuzzy Delphi method (FDM). Further, the relative weights of the selected measures were determined using the analytic network process (ANP). Results indicated that the five most important measures of sustainable performance were profitability (0.2528), green innovation and investment (0.1563), green image (0.1546), customer satisfaction (0.0799), and sustainability awareness of the top management (0.0516). Among these measures, the top three all belonged to the sustainability perspective, which comprised 56% of the overall weighting. The proposed SBSC framework can help Taiwanese semiconductor companies enhance their competitiveness in terms of sustainable operations is anticipated.

The BSC-based sustainability BSC (SBSC) conceptual framework and its corresponding operational model, which incorporates environmental and social issues, have been presented. In identifying the related measures and perspectives of SBSC activities for the proposed framework for the semiconductor industry, both FDM and ANP methods were applied. Compared with the previous literature, this paper has the following contributions. First, a new model for measuring sustainable performance, with emphasis on CSR in the semiconductor industry, has been developed. Such a framework has never been found in the previous studies. Second, the FDM and ANP methods were applied in the SBSC in previous studies are rarely found. The ability of the ANP was proven to capture both quantitative and qualitative criteria and to reflect more realistic results from decision attributes and alternatives has been proven through the existence of interdependent relationships between the actual sustainable performance and the evaluation environment. Therefore, ANP modeling can serve as a new method that offers managerial insights into measuring sustainable performance and in systematically identifying sustainable strategies. If a semiconductor company wants to incorporate environmental and social issues into performance evaluation, it can adopt the presented model, which includes all the measures and perspectives for measuring sustainable performance. The adoption of this model implies recognition of the competitive strategy of sustainability. Moreover, the weights determined in the case study can also be adopted as references. If the company is not familiar with the ANP technique, the weights can easily be determined by an expert group that is responsible for tasks associated with the management to conduct performance evaluations. Otherwise, the weights can be re-determined by an expert group through the ANP technique. Although the results obtained from this study are satisfactory, the proposed framework can still be improved. The outcomes of the ANP model were determined by experts in the semiconductor industry, the proposed framework should be applied in illustrated example for demonstrating sustainable performance.