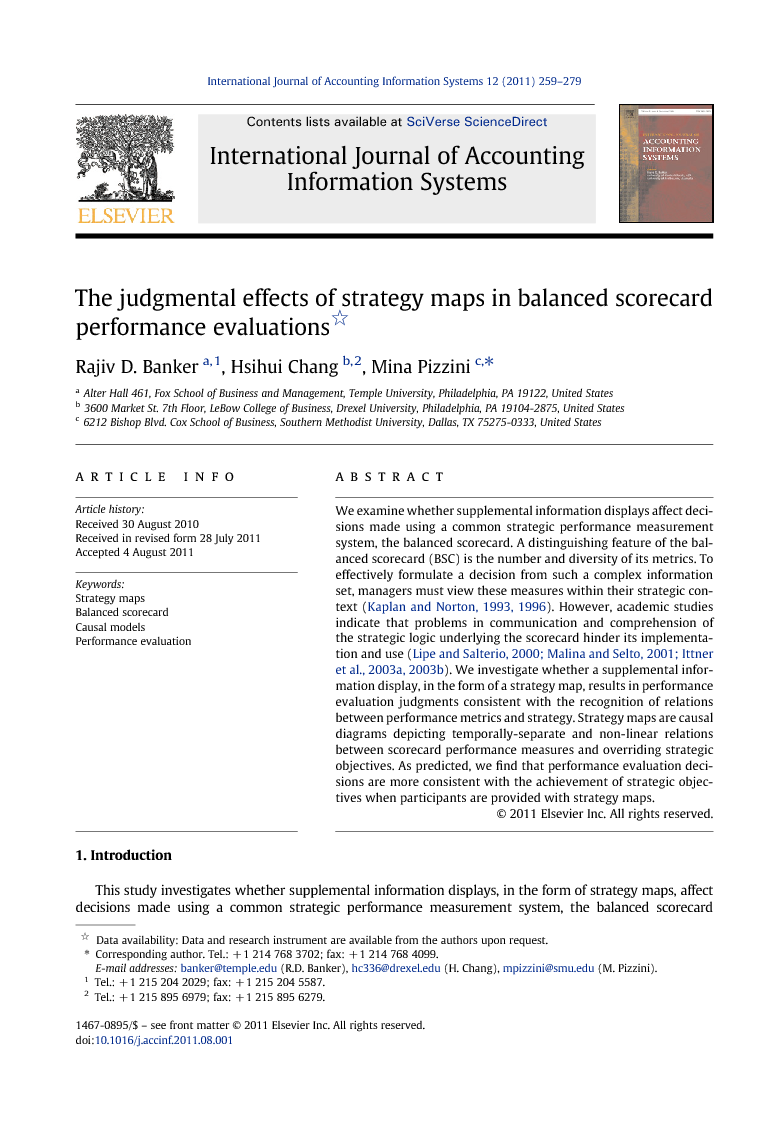 We examine whether supplemental information displays affect decisions made using a common strategic performance measurement system, the balanced scorecard. A distinguishing feature of the balanced scorecard (BSC) is the number and diversity of its metrics. To effectively formulate a decision from such a complex information set, managers must view these measures within their strategic context (Kaplan and Norton, 1993 and Kaplan and Norton, 1996). However, academic studies indicate that problems in communication and comprehension of the strategic logic underlying the scorecard hinder its implementation and use (Lipe and Salterio, 2000, Malina and Selto, 2001, Ittner et al., 2003a and Ittner et al., 2003b). We investigate whether a supplemental information display, in the form of a strategy map, results in performance evaluation judgments consistent with the recognition of relations between performance metrics and strategy. Strategy maps are causal diagrams depicting temporally-separate and non-linear relations between scorecard performance measures and overriding strategic objectives. As predicted, we find that performance evaluation decisions are more consistent with the achievement of strategic objectives when participants are provided with strategy maps.

This study investigates whether supplemental information displays, in the form of strategy maps, affect decisions made using a common strategic performance measurement system, the balanced scorecard (BSC).3 A strategic performance measurement system is a set of nonfinancial and financial objectives and performance measures representing a causal chain of activities that articulates management's hypothesis of strategy (Epstein and Manzoni, 1997). A distinguishing feature of the BSC is the number and diversity of its metrics: BSCs contain sixteen or more leading and lagging measures that capture performance along multiple dimensions (customer relations, internal processes, organizational learning and growth, and financial). The BSC's inherent complexity creates difficulties in communication and comprehension of its underlying logic which hinder implementation and use (Lipe and Salterio, 2000, Malina and Selto, 2001, Ittner et al., 2003a, Ittner et al., 2003b, Ittner and Larcker, 2003, Banker et al., 2004 and Dilla and Steingbart, 2005). Research on causal modeling suggests that strategy maps can simplify and facilitate the transmission of complex systems, and thus implies that strategy maps have the potential to help decision makers overcome the cognitive challenges posed by the BSC (Fiol and Huff, 1992 and Vera-Muñoz et al., 2007). This approach is consistent with studies in accounting, information systems, and psychology that find that altering or supplementing the manner in which information is presented can improve performance on decisions requiring complex judgments (e.g., Vessey, 1991, Tuttle and Kershaw, 1998, Lipe and Salterio, 2002 and Dilla and Steingbart, 2005). Accordingly, the purpose of this study is to investigate the impact of supplemental strategy maps on BSC decisions using an experiment. Strategy maps are causal maps depicting relations between BSC performance measures and overriding strategic objectives. Strategy maps can aid managerial decisions if they enable managers to assess a measure's relative importance to the achievement of strategic goals (i.e., linkage to strategy) and thus provide cues for managers to weight and aggregate BSC measures in formulating an overall decision. Kaplan and Norton, 2000, Kaplan and Norton, 2004 and Kaplan and Norton, 2006 instruct managers to use strategy maps to communicate the BSC; and, several companies use strategy maps with the BSC ( Mair, 2002, Kaplan and Norton, 2004, Kaplan and Norton, 2006, Urrutia and Eriksen, 2005 and Veth, 2006). Commercial scorecard applications, such as Oracle Hyperion Performance Scorecard, even produce strategy maps.4 Research in information systems and management has long recognized the value of causal maps in structuring complex problems (e.g., Axelrod, 1976, Eden et al., 1992 and Fiol and Huff, 1992). Causal maps help individuals to construct more accurate mental models of complex systems (Johnson-Laird, 1983), and experimental research suggests that decision makers perform better when their mental models are more similar to the external systems they represent (e.g., Wyman and Randel, 1998, Davis and Yi, 2004 and Capelo and Dias, 2009). Our experiment, which is based upon Banker et al. (2004), requires participants to use the BSC to evaluate managers in two different business units of the same company. Each business unit has its own 16-measure BSC. The measures differ regarding their relationship to business unit strategy: some are causally linked to strategy (linked) and some are not (non-linked). Banker et al. (2004) investigated whether decision makers relied more on strategically linked measures than non-linked measures or measures that are common across scorecards.5 They manipulated detailed strategic information at two levels: (1) no strategic information (Benchmark Treatment), and (2) a narrative on strategy and a strategy map (Strategy Information Treatment). Our research question and experimental design differ from Banker et al. (2004) in that we investigate whether supplementing narrative strategic information with a strategy map leads to decisions that are more consistent with strategic objectives. Thus, we add a third treatment in addition to the two treatments used in Banker et al. (2004). Participants in this third treatment receive narrative strategy information, but not a strategy map (Narrative Treatment). This enables us to investigate whether a strategy map, which is informationally equivalent to the narrative regarding unique BSC measures, improves decision-making. Consistent with our predictions, we find that participants that receive both a strategy map and a narrative on strategy rely more on strategically linked measures than those that receive only a narrative. This result suggests that strategy maps help managers view performance measures within their strategic context, and thereby, reduce the cognitive difficulty of using the BSC for performance evaluation. This research makes three contributions to the literature. First, it extends prior studies that investigate methods to improve managers' ability to effectively use the BSC framework to make decisions (Banker et al., 2004, Libby et al., 2004, Webb, 2004 and Dilla and Steingbart, 2005). In particular, our findings suggest that Banker et al. (2004) would not have obtained the results they did without the inclusion of a strategy map. Accordingly, this study is of interest to the many managers who use scorecards and other cognitively demanding strategic performance measurement systems. Second, our results indicate that a causal map facilitates the transmission of complex ideas from individual to individual, and hence support a map's decision usefulness for individuals other than those who formulate it. Thus our results support causal mapping as a communication tool, in addition to a problem-structuring tool. Finally, our results are consistent with studies in the information systems literature that find decision makers must understand an information system to fully reap its benefits (e.g., Davis, 1989, Davis et al., 1989, Subramanian, 1994 and Venkatesh and Davis, 2000). The next section reviews related literature and presents the research hypothesis. We describe our experimental design in Section 3 and present results in Section 4. Conclusions are discussed in Section 5.