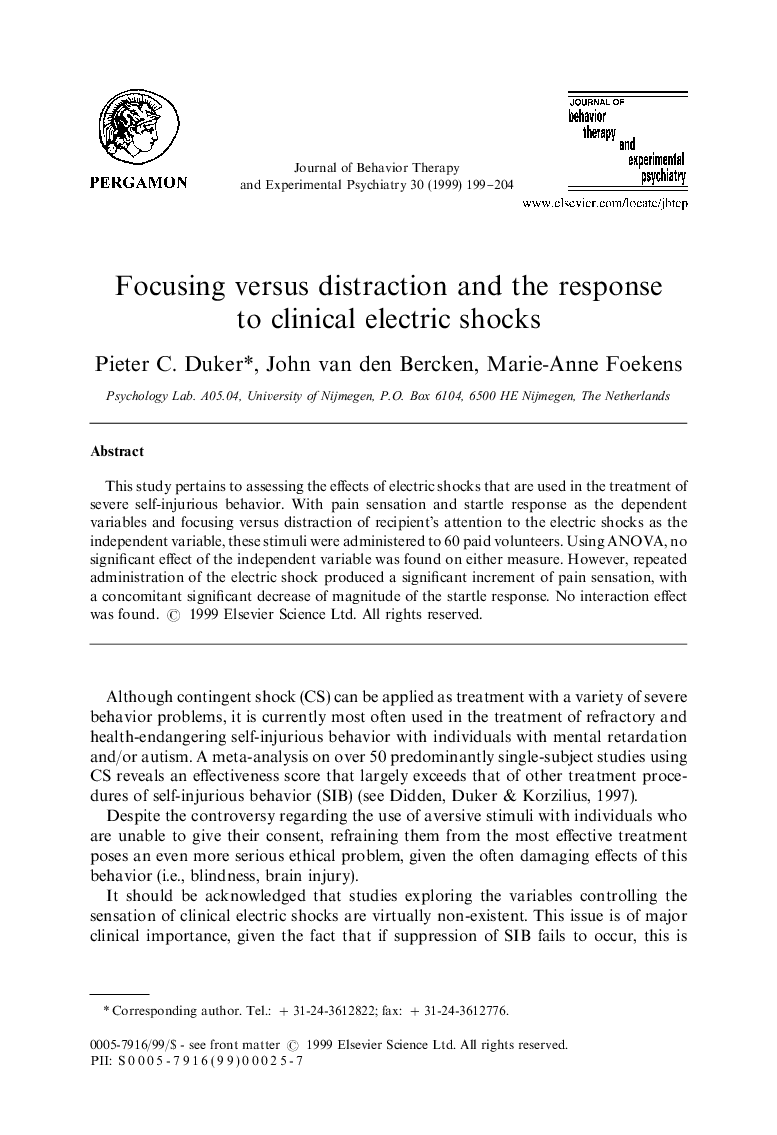 Abstract This study pertains to assessing the effects of electric shocks that are used in the treatment of severe self-injurious behavior. With pain sensation and startle response as the dependent variables and focusing versus distraction of recipient's attention to the electric shocks as the independent variable, these stimuli were administered to 60 paid volunteers. Using ANOVA, no significant effect of the independent variable was found on either measure. However, repeated administration of the electric shock produced a significant increment of pain sensation, with a concomitant significant decrease of magnitude of the startle response. No interaction effect was found. Although contingent shock (CS) can be applied as treatment with a variety of severe behavior problems, it is currently most often used in the treatment of refractory and health-endangering self-injurious behavior with individuals with mental retardation and/or autism. A meta-analysis on over 50 predominantly single-subject studies using CS reveals an effectiveness score that largely exceeds that of other treatment procedures of self-injurious behavior (SIB) (see Didden, Duker & Korzilius, 1997). Despite the controversy regarding the use of aversive stimuli with individuals who are unable to give their consent, refraining them from the most effective treatment poses an even more serious ethical problem, given the often damaging effects of this behavior (i.e., blindness, brain injury). It should be acknowledged that studies exploring the variables controlling the sensation of clinical electric shocks are virtually non-existent. This issue is of major clinical importance, given the fact that if suppression of SIB fails to occur, this is attributed to the characteristics of the aversive stimuli being used (von Heyn, Israel & Worsham, 1993; Williams, Kirkpatrick-Sanchez & Iwata, 1993). Duker, Reurslag and van den Bercken (1998) found that the personality factor introversion/extroversion accounted for statistically significant differences in pain sensation ratings of clinical electric shocks, with extroverts producing lower scores. The objective of research in this area is to reveal procedural information that may enhance the effectiveness of CS. A relevant study in this respect was conducted by Arntz, Dreessen and Merckelbach (1991). They found that focusing the recipient's attention towards the place of delivery of the shock (i.e., focusing) led to a significant stronger sensation than to instruct the recipient to disregard the stimulus as much as possible (i.e., distraction). Not less important was their finding that, across repeated administrations of the shock, focusing preserved the aversive sensation of the stimulus, whereas distraction led to habituation. If focusing to the stimulus would block habituation, faster conditioning and thereby faster suppression of the response is to be expected and fewer electric shocks are needed to suppress the target response (e.g., the self-injurious response). The purpose of the present study is to investigate the differential effect of focusing versus distraction on subjects’ pain sensation and startle response to the administration of electric shocks.