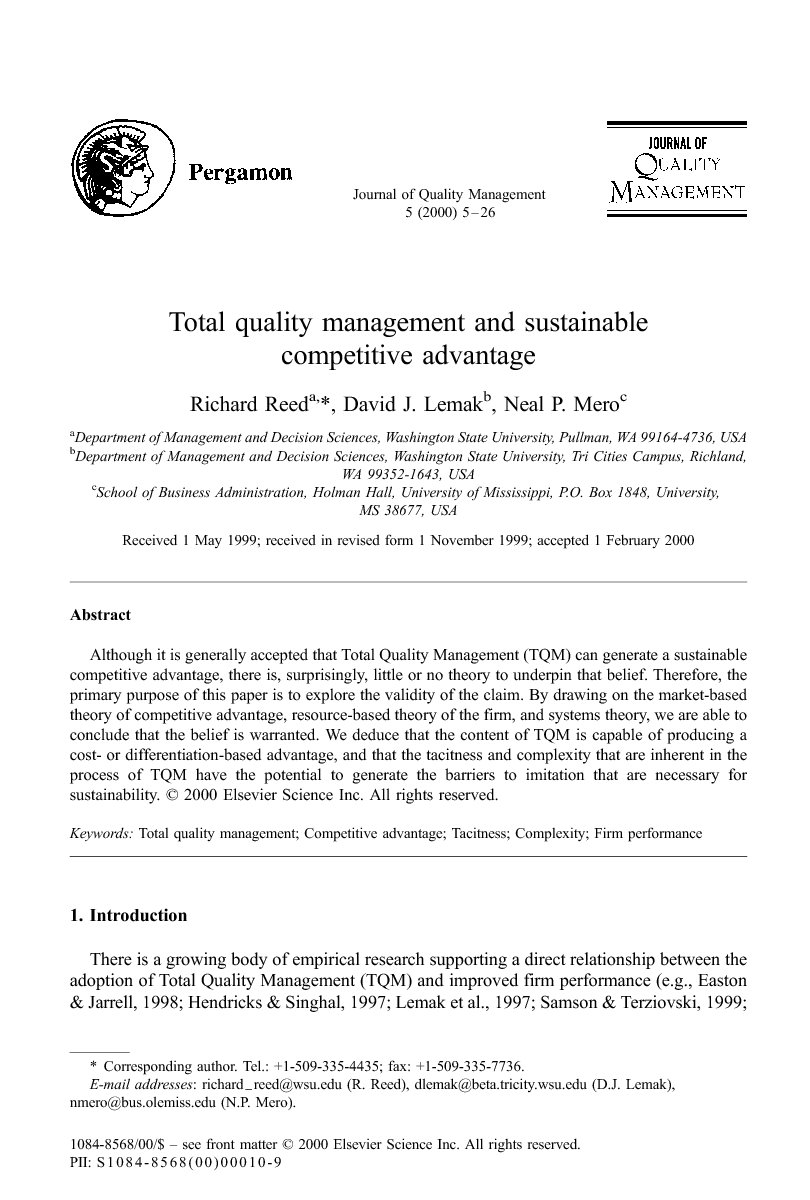 Although it is generally accepted that Total Quality Management (TQM) can generate a sustainable competitive advantage, there is, surprisingly, little or no theory to underpin that belief. Therefore, the primary purpose of this paper is to explore the validity of the claim. By drawing on the market-based theory of competitive advantage, resource-based theory of the firm, and systems theory, we are able to conclude that the belief is warranted. We deduce that the content of TQM is capable of producing a cost- or differentiation-based advantage, and that the tacitness and complexity that are inherent in the process of TQM have the potential to generate the barriers to imitation that are necessary for sustainability.

There is a growing body of empirical research supporting a direct relationship between the adoption of Total Quality Management (TQM) and improved firm performance (e.g., Easton & Jarrell, 1998, Hendricks & Singhal, 1997, Lemak et al., 1997, Samson & Terziovski, 1999 and Shetty, 1993). Given the theoretical link that exists between competitive advantage and performance, it is perhaps not too surprising that it has been claimed that TQM or similar quality management practices can be used to generate a competitive advantage (e.g., Curkovic & Pagell, 1999, Feigenbaum, 1990, Feigenbaum, 1992, Hewitt, 1994, Noori, 1991, Reich, 1994, Seawright & Young, 1996 and Tobin, 1990). It has also been claimed that TQM leads to sustainability of advantage (e.g., Cyert, 1993, Flynn et al., 1995, Harber et al., 1993, Hendricks & Triplett, 1989, Spitzer, 1993 and Tilton, 1994). There is an obvious intuitive appeal to these ideas and, from the number of times that the presumption of causality arises within the literature, it is apparent that they have gained face validity. But, intuitive appeal cannot substitute for theoretical grounding. The fact remains that there is no theoretical model to underpin these claims. Without sound supporting theory, it will be difficult to move quality management research to the next level. Therefore, the purpose of this work is to help fill the theoretical void that still exists between TQM and sustainable competitive advantage. Theory building in TQM was launched with the publication of the July 1994 special issue of the Academy of Management Review. The lead article in that issue (Dean & Bowen, 1994) did an effective job of mapping out the TQM theory landscape in terms of three dimensions — areas in which TQM overlapped with traditional management theory, areas where TQM practice could be enhanced by current theory, and areas unique to TQM. Most theory building since then has occurred, not surprisingly, in the first area, where ideas from the larger body of literature can be expanded or honed to specific applications in the quality literature. The result of that endeavor has been theory mainly at the micro level of analysis in areas such as organization behavior (e.g., Shea & Howell, 1998), organizational change (e.g., Jenner et al., 1998 and Reger et al., 1994), leadership (e.g., Puffer & McCarthy, 1996), and human resource management (e.g., Cardy & Dobbins, 1996 and Waldman, 1994). Much less has been done at the macro level of analysis, even though some initial groundwork was laid in areas such as organization systems (e.g., Spencer 1994), contingency theory (Sitkin et al., 1994), organization culture (Manley, 1998), and strategy (Reed et al., 1996). Our research adds to the macro level work that views TQM through the strategy lens. Here, we offer theory that is grounded in the strategy literature that shows how TQM is capable of not only generating a competitive advantage but also providing sustainability.

The main intent of this paper was to explore the relationship between TQM and competitive advantage and to determine, from a theoretical perspective, whether the claims in the TQM literature that the strategy can produce a sustainable advantage are justified. After an analysis of the seminal TQM literature, we provided arguments that show how the strategy content of TQM can generate a cost- or differentiation-based advantage. Using concepts from resource-based theory and systems theory, we then showed how the process of TQM has the potential to create sustainability of advantage. The individual components of the strategy's process embody tacitness and are a complex system, thus producing the causal ambiguity that can protect a TQM-based advantage from imitation. We have not generated any propositions for translation into hypotheses for empirical testing because, as just pointed out above, that was not the intent of the work. However, in the process of providing a theoretical rationale for the relationship between TQM and sustainable advantage, several issues worthy of further research consideration have emerged. There are also some points that are worth noting for practice and the implementation of TQM.