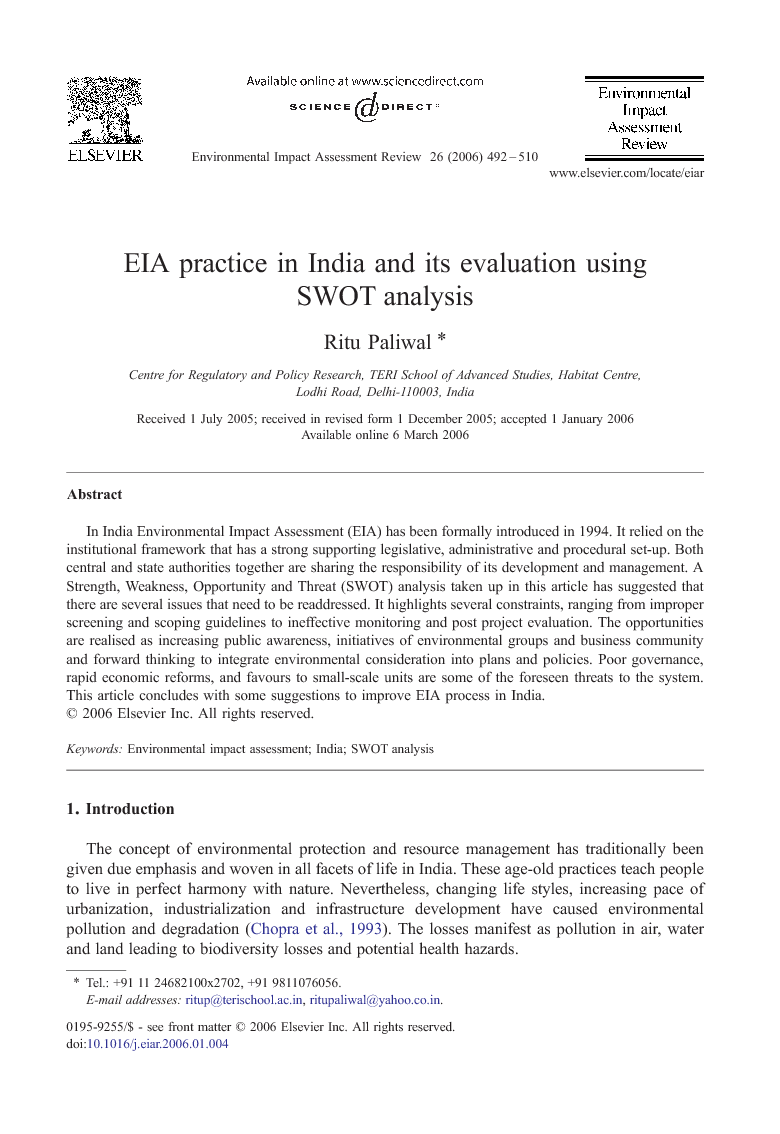 In India Environmental Impact Assessment (EIA) has been formally introduced in 1994. It relied on the institutional framework that has a strong supporting legislative, administrative and procedural set-up. Both central and state authorities together are sharing the responsibility of its development and management. A Strength, Weakness, Opportunity and Threat (SWOT) analysis taken up in this article has suggested that there are several issues that need to be readdressed. It highlights several constraints, ranging from improper screening and scoping guidelines to ineffective monitoring and post project evaluation. The opportunities are realised as increasing public awareness, initiatives of environmental groups and business community and forward thinking to integrate environmental consideration into plans and policies. Poor governance, rapid economic reforms, and favours to small-scale units are some of the foreseen threats to the system. This article concludes with some suggestions to improve EIA process in India.

The concept of environmental protection and resource management has traditionally been given due emphasis and woven in all facets of life in India. These age-old practices teach people to live in perfect harmony with nature. Nevertheless, changing life styles, increasing pace of urbanization, industrialization and infrastructure development have caused environmental pollution and degradation (Chopra et al., 1993). The losses manifest as pollution in air, water and land leading to biodiversity losses and potential health hazards. Consequently, rules, laws and policies on environmental protection were introduced. One such effort, i.e., the Environmental Impact Assessment (EIA), particularly aims to optimise a trade-off between developmental activities and socio-ecological losses. It is a management tool to be linked closely to the project life cycle to ensure that appropriate environmental information is provided at the correct time (Wood, 1995). The overall objective of the EIA is to design developmental projects and activities taking into consideration the environmental perspective. In India, the first EIA was ordered, during early 1980s, on the Silent river valley hydroelectric project, which was a controversial project (Valappil et al., 1994 and MoEF, 2003a). This project, proposed by the Kerala State Electricity Board (KSEB) to build a 130 m high dam across the Kuntipuzha river and a reservoir,1 was considered a big threat to the biodiversity and forest ecosystem of the Silent valley. Later in 1985, the project was abandoned and Silent Valley was declared as a national park. This case marked a new beginning in India and since then, EIA was extended to other activities. Projects like mining, industries, hydroelectric plants, thermal power plants, atomic power plants, ports and harbours, rail, roads, highways, bridges, airports and communication project, required EIA if: • Project needed the approval of public investment board/planning commission/central water commission/central electricity authority, etc. • Project was referred to Ministry of Environment and Forest (MoEF) by other ministries. • Project was to be located in environmentally fragile or sensitive areas. • Project was under dispute. However, EIA was introduced in 1994, when MoEF passed an EIA notification under Environmental Protection Act (EPA), 1986, which made EIA mandatory for 29 highly polluting activities and later on three more activities were added to this list (Appendix A) (MoEF, 1994 and MoEF, 2004). Over the years, the system has undergone several amendments to improve the environmental clearance (EC) process and to make it an integral component of decision-making. This paper will add knowledge about the EIA process in India. It describes the current statutory, administrative and procedural arrangements for EIA in India. To highlight the systems constraints, future potentials and challenges a SWOT (strength, weakness, opportunity and threat) analysis has been taken up in this work. The SWOT is based on authors' own experiences during field visits, professional's views (i.e., government officials, consultants and managers) revealed during informal talks, and semi structured interviews and available literature on the subject. The SWOT suggests that there is a huge possibility to improve the system but the strong legal framework is a positive and supportive feature. Opportunities and threats discussed are relevant in the present context and should be given due consideration while thinking on making EIA more accessible. At present there are many efforts going to improve the environmental appraisal process and compliance by MoEF. This paper concludes with some contemplation on the potential steps considered necessary to improve the effectiveness of the EIA process. These suggestions are not only felt significant for Indian system but may also prove helpful for other developing countries those are undergoing similar developments.

It has been recognised that India is well verse with apt legal provisions, which are very essential for further strengthening of the EIA process. Moreover, EIA process possesses a basic structure, including screening, scoping, comprehensive study, progress report, review, public participation, decision and follow-up measures. To address the critical issues political commitment and public participation is indispensable. Improved effectiveness will also depend on strength of government agency coordination, integrated decision-making adequate training to various stakeholders and supporting infrastructure for purposeful monitoring and enforcement. It is required that EIA system be regularly revisited for progressive refinement that should not only remove existing constraints but also take care of future challenges. It is further recommended that project level EIA needs immediate attention but efforts should also be targeted to include environmental conservation concerns at policy and planning level. Such initiatives would help in filling up the gaps in coordination between various government authorities involved in planning and execution.